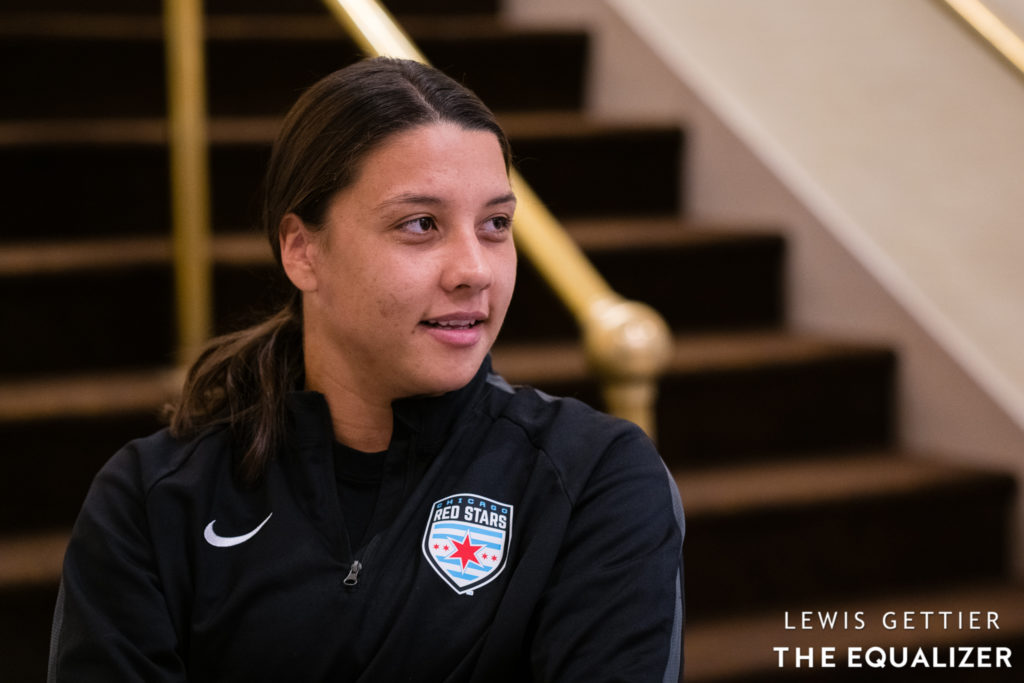 Knowing no limits: Soccer before and after Sam Kerr

Knowing no limits: Soccer before and after Sam Kerr

All I remember was a figure in a size-and-a-half too big, purple-and-white jersey moving across a scrappy football pitch somewhere in Sydney in ways that I hadn’t seen an athlete move before.

I tried to figure out what game it was. I trawled through the fixtures of the past 12 W-League seasons looking for it. I felt I needed to mark it down in a calendar somewhere, to celebrate its anniversary like a birthday.

Because that’s what it was, in a way. My understanding of football changed then. There is now only Before Sam Kerr and After Sam Kerr.

The Matildas striker has broken more and more records lately. Her third consecutive Golden Boot award in the National Women’s Soccer League was swiftly followed by her second Most Valuable Player award — the first time any footballer has done it in the league’s history. She’s won almost everything that’s possible to win in Australia, too, and on Wednesday she announced that she is joining Chelsea to try to conquer England and Europe next.

And yet, despite all of this, the thing that makes Sam Kerr riveting (to me, anyway) can’t be captured in medals or trophies or whatever club crest she wears. Remember that hallway scene from The Matrix where Neo finally recognizes his power and is able to control bullets with his mind? Watching Sam Kerr in real life for the first time was like that, but with shin guards and a football.

She glided past world-class athletes with astonishing ease. She leaped above players a foot taller than she was to win balls in the air. She zipped in and around them to win balls along the ground. And when she was at full flight — knees high, kick-back elastic, open hands slicing through the sky — every atom in her body seemed to be stretched to its extreme. But she still looked totally unbothered. It was as though space itself was a conscious thing that opened itself up around her, like she had access to some other plane of physics that only her and the ball could work in. “How?” I asked myself. How does she look to be playing a totally different game to everybody else?

My background is in academia, so my immediate frame of reference for this puzzling experience was theoretical. In 1980, philosopher Iris Marion Young wrote an essay titled “Throwing Like a Girl: A Phenomenology of Feminine Body Comportment Motility and Spatiality.” She cites an old study that looked at the different ways boys and girls threw a ball and calls out the original author for concluding that there were innate biological differences between the sexes that resulted in these different ways of throwing.

Instead, Young puts the differences down to the cultural environments in which boys and girls are raised — in other words, girls within certain contexts are taught from a young age to shrink themselves, to shy away from what their bodies are really capable of doing. We tighten up on train seats to accommodate man-spreaders. We get out of the way of men when walking through shopping centers. To take up space as a girl in these public environments is a rebellious act; it pushes back against the way girls are expected to ‘be’ in the world.

I read this essay as an undergrad student and its lessons flooded back to me as I watched Kerr move around the pitch that day. Maybe, I thought, this is why her movement is so different from that of those around her: she doesn’t seem to know or care about any kinds of restrictions. She moves with the kind of freedom we all wish we had; the joy of a woman who is not afraid of pushing her body to its limits, of making it do the things she knows it can.

Kerr’s natural athleticism is no mystery, and she’s explained that her love of AFL as a kid — one of the most physical sports in the world — probably helped her in that regard. But that still doesn’t really explain how it feels to watch her do her thing on a football pitch in real life, to tear past or leap above or fend off athletes who are already in the upper echelons of their sport. It still doesn’t explain why I remember that particular day while not remembering much about it at all.

It’s kind of fitting to think about Kerr in this way considering her remarkable rise over the past few years was preceded by a breakdown in her body, coming in the form of a debilitating foot injury. This is the same body that now moves as though it had never suffered the shock of recognizing its own limits. Or perhaps that’s why she does what she does now with such enthusiasm, because she has been there and felt that, and is grateful for the opportunity her body has given her to keep going.

I’ve been trying to work out what it is about Sam Kerr that affected me so much that afternoon. I still don’t know whether it’s all in my head or if there really is something metaphysical about her presence on a pitch that everybody else can see, too. Maybe it’s more useful to do what she does instead: simply be in her moment, to meet her joy with our own.

Kerr will wear Chelsea blue for the next two and a half years. At 26, she likely has a long career ahead of her. Wherever she goes, whatever club colors she wears and whatever trophies she wins or doesn’t win, I’ll remember her most for that day — however many years ago it was — when Sam Kerr controlled bullets with her mind.