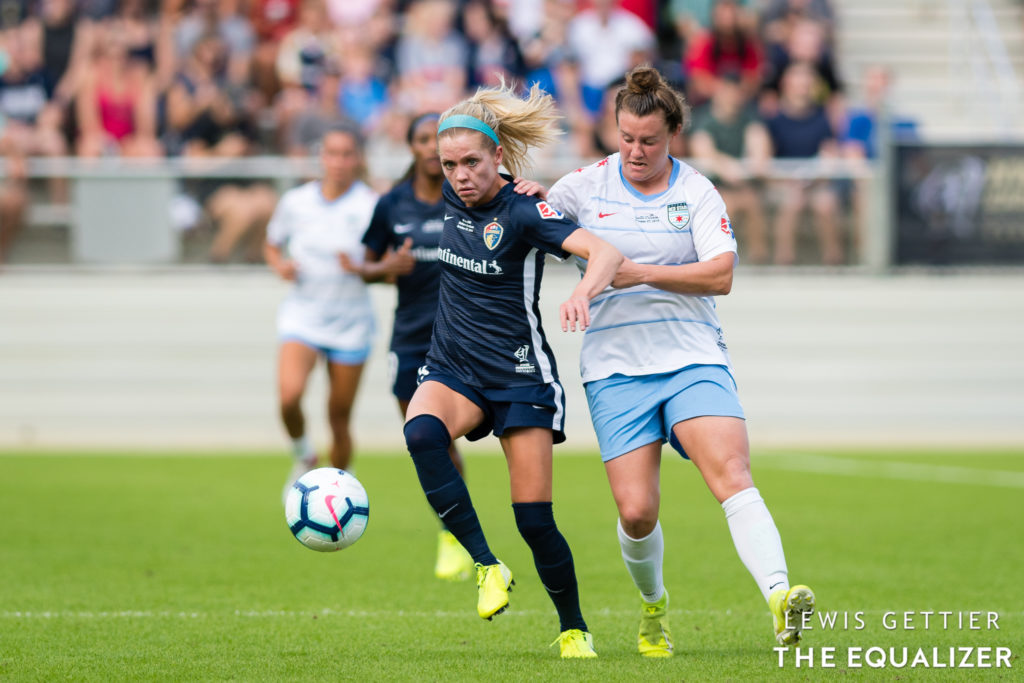 CARY, N.C. — If competitive finals or favorites losing is your thing, then the 2019 National Women’s Soccer League Championship was not for you.

But that doesn’t mean there was not plenty to talk about. Here are a few things of note, including the early demise of the Chicago Red Stars, the culture ingrained in the North Carolina Courage, and one standout player.

The Chicago Red Stars enjoyed the best season in their NWSL history, earning a maiden trip to the NWSL Championship. Unfortunately, the reality of being in the final paled in comparison to the dreams they likely fostered while losing semifinals each of the last four years.

Only one day left! Get 40% OFF your first year of annual subscription to all our best content

An early North Carolina Courage goal on Sunday set the tone for a whooping the Red Stars won’t soon forget. By the time it was over, the 4-0 scoreline matched the biggest blowout in the history of women’s professional soccer finals in the U.S., dating back to WUSA. (It tied the 2010 WPS final, in which FC Gold Pride defeated the Philadelphia Independence, 4-0.)

“We were on the back foot from the get go tonight,” Red Stars head coach Rory Dames said. “And it took us about 15 or 20 minutes to settle in.”

By that time, the Red Stars were behind a goal, soon to be more. They did have the first chance of the match though, a Vanessa DiBernardo shot that Steph Labbe had to lunge to her right to knock away. Moments later, Lynn Williams led a counterattack and Debinha finished a ball that was played into the box and unable to be cleared by Sarah Gorden. It was a goal from which the Red Stars would not recover.

“We knew the key to the game was going to be defensive transition,” Dames said. “I think when we look back we’ll be pretty disappointed in the first three goals.”

Chicago’s season is over. What now for Sam Kerr?

Perhaps the microcosm moment for the Red Stars came late in the opening half when, Savannah McCaskill made sent a lost pass that was probably intended for Sam Kerr but wound up nowhere of note. Kerr turned around and shouted at McCaskill, who wanted none of it.

“I think Sam was frustrated about the team not coming up a little higher in behind her,” Dames said. He added that the Courage did not do anything special to shut down Kerr. “When they run at you in transition — they attacked us with five and they kept five. It wasn’t like they overloaded us coming forward, they’re just really dynamic. We just got caught dropping back and chasing in our end at times.”

Specifically to the incident with Kerr and McCaskill, Dames said that by the time he arrived in the locker room for halftime, the two were at a whiteboard trying to work out whatever specific situation they had been discussing. He did, however, admit the behavior was “first and foremost very out of character for our team.”

Dames added that he was proud of how his team hung in the match until the end despite the full realization near the end that the game was a lost cause. And then all they could do was congratulate the Courage, accept their runner-up medals and try to process one of their worst days of soccer most of them have ever experienced.

As the clock neared 20 minutes, Sam Kerr dribbled into the attacking third, flanked by four Courage players. There was hardly a Red Stars player in sight to lay the ball off too, certainly none making any runs into more advanced positions. And then Lynn Williams turned on the afterburners and sprinted about 30 yards to Kerr’s backside. The 2016 league MVP reached her foot in, dispossessed Kerr, passed off to her defenders, and dutifully returned to her forward position.

“When Lynn Williams ran down Sam Kerr midway through the first half, that said a lot about our team ad what we’re all about,” Courage coach Paul Riley said as part of his opening statement of the match. “That we all pitched in today to stop Sam Kerr.”

The Courage barely needed to stop Kerr, because they ran the Red Stars over in the midfield and made Kerr a virtual non-factor. “I thought the midfield was excellent tonight,” Riley said.

The 4-0 win sealed the third NWSL Championship in four years for the club that was sold in early 2017 and moved from Western New York to North Carolina. The match, and Williams’ defensive play on Kerr, were emblematic not only of the talent on the pitch but of the incredible culture Riley has established.

“When you coach a special team, when it comes to the big game they just look different,” Riley said after beating the Red Stars in a playoff game for the third year in a row, twice after having not won against them in the regular season. “This team has looked different probably since the ICC. The ICC galvanized the group. We’ve looked different since then.”

Riley said he told the team at halftime to go and get a fourth goal and that he never considered sitting on the 3-0 lead. And he said the Courage train how they play — always pushing hard and pushing forward.

One of the highlights of the match was when Riley was able to take off Heather O’Reilly. Before the season began, O’Reilly announced that it would be her last and as such this was her final match as a professional. The title was her fourth — three in the NWSL and another in WPS — matching her three Olympic gold medals and one World Cup title with the U.S. national team. She said the culture in North Carolina is comparable to the one that has been cultivated over decades with the U.S.

“I think it’s really similar,” she said. “It’s just in the training environment. Everybody just shows up to put in the work that day. No one ever takes it easy. Club environments are a little bit different just because you’re with each other every day and you kind of become like a family. The national team, you come together for training camps throughout, so you don’t have that consistency. So I’d say the camaraderie is even better here just because we’re with each other seven months straight out of the year. But in terms of competitiveness, I’d say it’s pretty much exactly the same.

“Which is impressive, by the way.”

Ertz was a standout

On a day to forget for many Red Stars, the performance of Julie Ertz stood out as one of the best. A week that began with Rory Dames suggesting Ertz might be moved off the back line again concluded with her being forced to stay there after Tierna Davidson injured her ankle in practice on Thursday. Ertz may have been mildly culpable on the backbreaking third goal, but that is going to happen to a center back playing behind a midfield that was no match for the opponent. She was otherwise breaking up plays, blocking passes and crosses and doing her best to distribute out of the back. Dames called her the best Red Star on the day “by far.”

“I’ll preface this with, I know I’m biased, but I think Julie Ertz is the best player in the world,” Dames said. “If you can find a better leader somewhere, I’d be happy to sit down and go point for point with them. I don’t have enough words or enough time to generally share how special I think Julie is both as a soccer player and as a person.”

As the club heads into an offseason in which it appears more likely than not that Sam Kerr will finally accept a lucrative contract to play in Europe, Dames made it clear just how much he covets Ertz who he drafted with the No. 3 overall pick in 2014 and immediately handed the reins to the back line.

“There’s not anything that you could offer me that I would ever move her off the team,” he said. “She’s the backbone of our group. She’s the face of our franchise. She has been since the day she arrived. As I said to her after the game, I think I feel the worst for her out of anybody because if anybody, she deserves better than what happened today.”

Chicago’s season is over. What now for Sam Kerr?
The Equalizer Podcast, Episode 82: All Hail the Courage