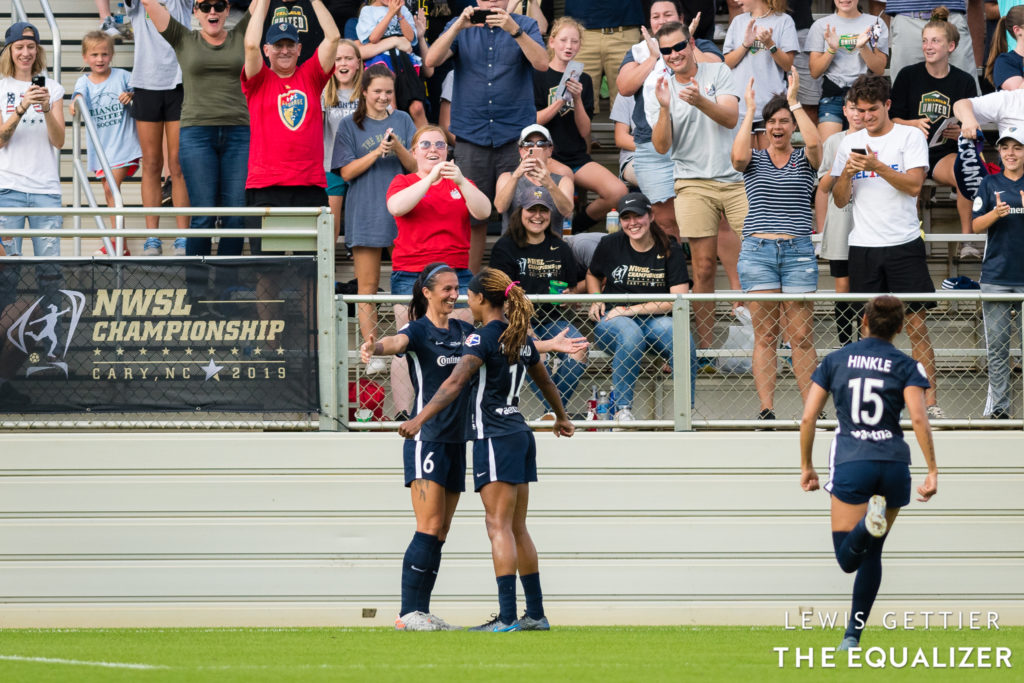 It was a masterclass display from the best team in league history and arguably the best in the world. The game as also pretty much over as soon as it started. Debinha scored in the 4th minute, and the rout was on.

Here are three things that stood out on a sunny, muggy day in North Carolina:

There was plenty of controversy this week when the NWSL unveiled a best XI and second XI which appeared to have played the 2019 domestic season in an alternative universe. The most egregious omission from both teams was Courage midfielder Debinha, who somehow didn’t make the list despite being a finalist for MVP.

Sam Kerr won the league MVP award, but Debinha was the Championship MVP and easily the best player on the field on Sunday. She toyed with the Red Stars’ midfield, making Danielle Colaprico and Morgan Brian look like statues as she drove at them on the dribble. Chicago’s midfield was overrun in a lot of ways, but no player did more damage than Debinha.

Debinha started the play which eventually led to her first goal. On Dunn’s goal – the back-breaker in the final seconds before halftime – Debinha drifted wide to find the ball, funneled it inside, then got back onto it on the end line for the pseudo assist. If it felt like Debinha was everywhere, it’s because she was.

Sunday’s heat and humidity was unexpected given the forecast all week for rain. Whether or not it took Chicago by surprise — and whether or not the Courage were more acclimated given they’ve played in it at home all year — is a tough case to prove. It was clear, however, that the Red Stars were gassed even before halftime.

Savannah McCaskill struggled mightily and got pulled at the start of the second half. Sarah Gorden struggled to deal with Jaelene Hinkle and the Courage midfielders drifting wide. And as Debinha, Mewis, McDonald — you name them — drove inside through the midfield, Colaprico and Brian struggled to keep up.

Sunday’s sellout crowd of 10,227 was the largest in the history of Sahlen’s Stadium — for any game. Courage supporters packed the south end with flags and drums and chanted beyond the final whistle. Red Stars supporters traveled well and filled the section behind the stadium’s north goal. The stayed, with flags and scarves held high, as a somber Red Stars team accepted their second-place medals.

It wasn’t the result they wanted, and it might have been an uglier one than they could have ever imagined. It might have been the last time they see their all-world player, Sam Kerr, in a Chicago uniform. Whether it was or was not any of those things, it was a great follow-up to an incredible scene of singing and dancing in Bridgeview, Illinois, after last week’s semifinal victory.

From a packed house of fans to an overflow of media, it almost felt like the event had outgrown the venue. That’s a wonderful thing to think about as the league’s seventh season comes to a close.