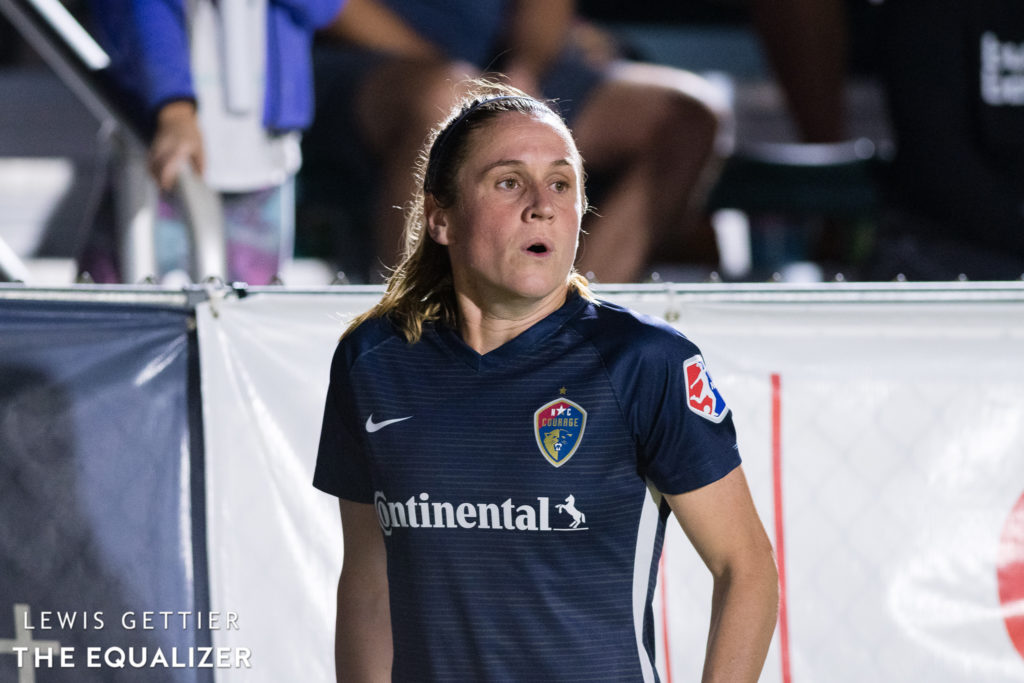 CARY, N.C. — Here are some stray stories floating around North Carolina as the National Women’s Soccer League gets ready to crown its seventh champion on Sunday.

O’Reilly reflects on past finals

When then-FC Kansas City head coach Vlatko Andonovski traded for Heather O’Reilly ahead of the 2015 season, he was sure to remind everyone about her sterling record in finals dating all the way back to high school. She was on the right side again that season when FC Kansas City repeated with a 1-0 win over Seattle Reign FC.

Click here for all of our 2019 NWSL playoffs coverage

O’Reilly had the assist on the goal that night, scored by Amy Rodriguez. But there is more to the story. The Reign lost Kendall Fletcher to an injury in the second half and replaced her with Elli Reed. On the very next sequence, O’Reilly dribbled up the left side — beating Reed — and crossed it in to Rodriguez for the goal. It was the only time the entire match that she attacked on the left side. She was asked again at media day whether she was ready to admit it was a conscious decision to go after the newly entered substitute.

Get 40% OFF your first year of subscription, only through Tuesday

She was more serious when discussing the 2009 WPS final when she scored the only goal for Sky Blue FC in a 1-0 win over the LA Sol. She remembered the goal of course, but what about her daring slide tackle against Aya Miyama that had the stadium gasping at the possibility of a red card?

“I do remember that play and I remember that game,” she said. “It was great to score. And the play — I still feel like I got all ball. It was a really gutsy tackle in the box to prevent a goal-scoring opportunity. Ten years later I still think it was a fair play.”

O’Reilly was also part of the Courage’s NWSL Championship last season, meaning that if they repeat, she will win her fourth domestic club championship. The only players currently with four titles are McCall Zerboni and Christine Sinclair. O’Reilly can match Sinclair on Sunday, but a Courage win would also give Zerboni her fifth.

“It would be nice to get a fourth,” O’Reilly said ahead of what is scheduled to be her final match.

Another (near) winning moment for Heather O’Reilly

On the same week Sam Kerr prepares for what could be her final NWSL match, Marta inked an extension to return to Orlando Pride. Kerr’s goal-scoring exploits of the past three seasons have drawn comparisons to Marta’s prime years, three of which were spent shredding defenses in WPS.

“They’re both very different in how they play but obviously both amazing players,” said Paul Riley, who lost two WPS finals to Marta and will face Kerr’s Red Stars on Sunday. “Marta in her prime is a different player for me. She gets on the ball [in the] midfield area and just takes off and does her thing. Sam Kerr is different. She relied on a lot of other guys to get her in. They’re a little more direct then the teams Marta played for.”

Zerboni was Kerr’s teammate on the Western New York Flash when the Aussie came to play in NWSL as a teenager in 2013. She also played with Marta on the 2011 Flash. Her assessment mirrored Riley’s.

“Totally different players. Totally different styles,” Zerboni said. “I think what they can achieve is similar. I see Sam having a lot more career left in her. Marta’s kind of been a role model of the highest and the best and everything that an individual can achieve. Sam Kerr, and players like that, want to go break those records.”

Zerboni continued: “Sam doesn’t have a whole lot of trickery on the ball. She’s a very straight-nosed player. Marta’s magic [on the ball]. They both kind of try to play with their strong foot—Marta tries to play on her left foot, Sam tries to play on her right foot. They’re just completely different players, but like I said they both can achieve similar things and it’s exciting to be a part of them and what they’re doing right now in women’s soccer.”

Zerboni and Kerr were teammates for two years, most recently in 2014. Five years, later Zerboni said she has enjoyed watching Kerr grow up on and off the field.

“She was just a kid, wide-eyed, bushy-tailed, lots of energy,” Zerboni recalled of teenage Kerr. “She’s a good character. I think she’s matured a lot. On the field as well. She’s always had pace She’s always had that nose for goal and that power and that ability. But she has really refined her game, trying to manipulate defending shape. She’s understanding of how to pull people out of their comfort [zone] and make herself some opportunities. It’s been a joy to kind of watch her grow in her career. I met her when she was a child and now she’s an adult woman.

As for Riley, he spent at least one morning this week studying just film of Kerr.

“I spent two hours this morning just looking at Sam Kerr and clipping Sam Kerr,” he said on Tuesday. “Because I think she’s just impossible to mark. She runs differently from Marta because she doesn’t need the ball at her feet. She wants the ball into space and behind. She can come back for the ball. But I think they’re most dangerous when she’s running behind.”

Most of the players who played for the U.S. at the World Cup have admitted to being tired. Riley and Dames were asked at a joint press conference about how the league could better handle World Cup years to keep players fresh. Riley went first and changed the tenor of the conversation just slightly.

“Our players, and I know Rory just said it so his players obviously the same thing. They want to play; they want to be here,” Riley said. “I wish every national team player wanted to be here. There’s quite a few, you saw them named to some all-XI teams, they don’t want to to be in their markets and don’t want to help. I think every single player on that World Cup roster should be wanting to be back at practice as fast as possible to help their club whether they’re bottom or they’re top or the middle of the pack.”

Riley went on to recite a conversation he had with Sam Mewis after she returned from France, one in which she began by telling the coach she still had 27 games left to play. Riley said that was not the case. Mewis protested. ‘No, you have Saturday’s game. That’s the only game,’ Riley finally said. “That was the only way to do it for her. She was looking at 27 games in a row. We’ve had to manage them and rest them and take them out of practice.”

Dames agreed that he has never had an issue with U.S. players not being bought in to being Red Stars. He did offer some concern that the perception on the outside may not be completely suitable for bringing in top international talent.

“I think the bigger concern is, it’s going to be tough to bring top level international players into the league if the perception from the outside is U.S. players can use the league as they see fit or play in it when they want to and not play when they want to,” Dames began. “When international players come over here, they’re putting their bodies on the line to play. They’re putting themselves at risk. If the perception is that not all of the U.S. players have to do that, it’s going to be tough to either keep those players here or bring other ones in. And that makes it difficult to sell. And it’s out there. It’s definitely a perception of the league that one way or another we have to figure out a way to change. And if you’re playing in this league, regardless of what your status is, you need to be bought into the league.”

Riley is hopeful that having a national team coach who has been on the league side of it for the last seven years will be able to help offer some solutions for balance. That coach, The Equalizer has confirmed, will be Vlatko Andonovski who has taken five NWSL squads to the playoffs in seven years and won two NWSL Championships.

“Obviously when the new coach for the national team gets announced, his connection to the rest of us is pretty strong,” Riley said on Saturday. “I think it’s good discussions to have about what to do for the next Olympics, the next World Cup. At the end of the day this is for the players. It’s all for the players. What platform can we give them to help them improve and help manage this without major injuries. Obviously a lot of players come back from the World Cup that have injuries.”

Denise O’Sullivan might be the best player no one is talking about
NWSL Championship: Courage claim second straight crown