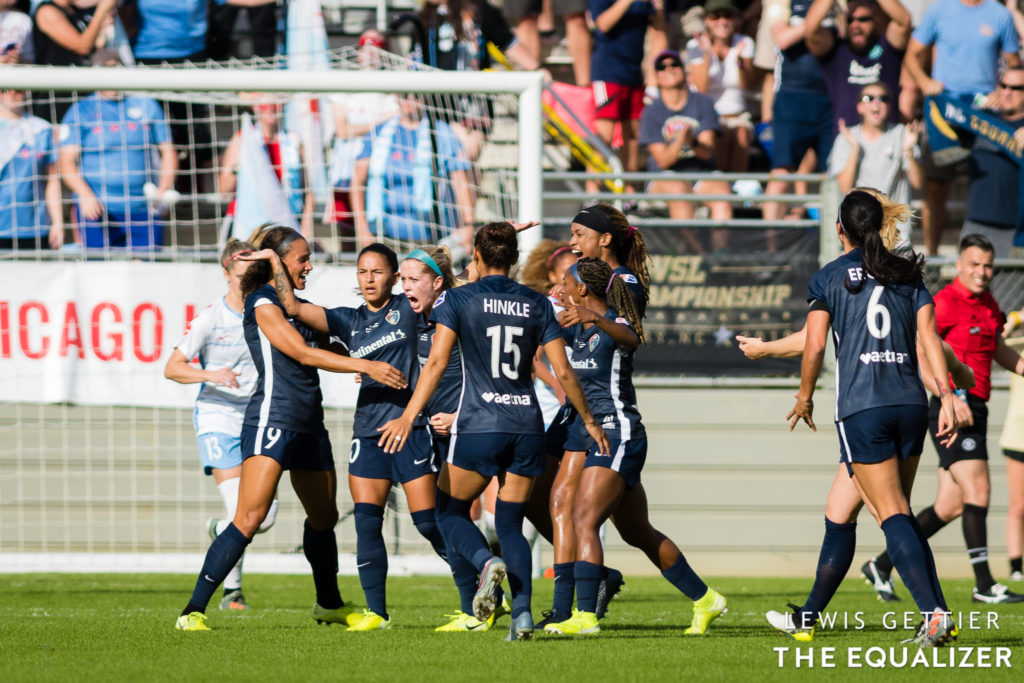 Cary, N.C. — For the second year in a row, the North Carolina Courage have won the National Women’s Soccer League Championship. The Courage put up four goals at WakeMed Soccer Park to route the visiting Chicago Red Stars, 4-0.

Hosting the final at their own stadium, on their own field, the Courage picked up steam early. Debinha picked up a loose ball in the box and slotted it past Alyssa Naeher. Meanwhile, Jess McDonald also managed to find the back of the net before the clock struck 30. McDonald’s shot was off a Lynn Williams assist, scoring on the far post.

Chicago, in their first-ever final, couldn’t seem to pick up momentum. In the first half, Sam Kerr only recorded one shot on goal. The Red Stars as a whole found two shots on goal, with the other coming from midfielder Vanessa DiBernardo. However, Stephanie Labbé, the Canadian goalkeeper, managed to collect both for a first-half clean sheet.

Chicago players expressed frustration on the pitch, including an instance where Sam Kerr made her feelings known to Savannah McCaskill.

However, the Red Stars made a few adjustments and entered the second half with more chances. McCaskill was taken out of the match in favor for Katie Johnson, the Mexican international. Casey Short and Kerr provided the best moment of the early second half minutes, but Kerr’s header went just a bit wide.

The momentum didn’t last long though. On a set-piece play, Abby Dahlkemper sent in a picture-perfect ball to Sam Mewis, who dove and got her head on the ball. The goal made for four different players with goals in the championship.

In front of 10,227 fans, which set a new attendance record for WakeMed Soccer Park, the Courage lifted up their second-straight NWSL trophy. The match was also the final competition in professional soccer for Courage defender Heather O’Reilly, who put her final mark on her illustrious career with a victory.

As for Chicago, there are plenty of positive takeaways from the season. The Red Stars made it over the semifinal slump they endured for the last four seasons. While there are rumors of Kerr’s return to the Red Stars and the league, there is plenty of talent including Casey Short, Vanessa DiBernardo and plenty others.

For one last time…