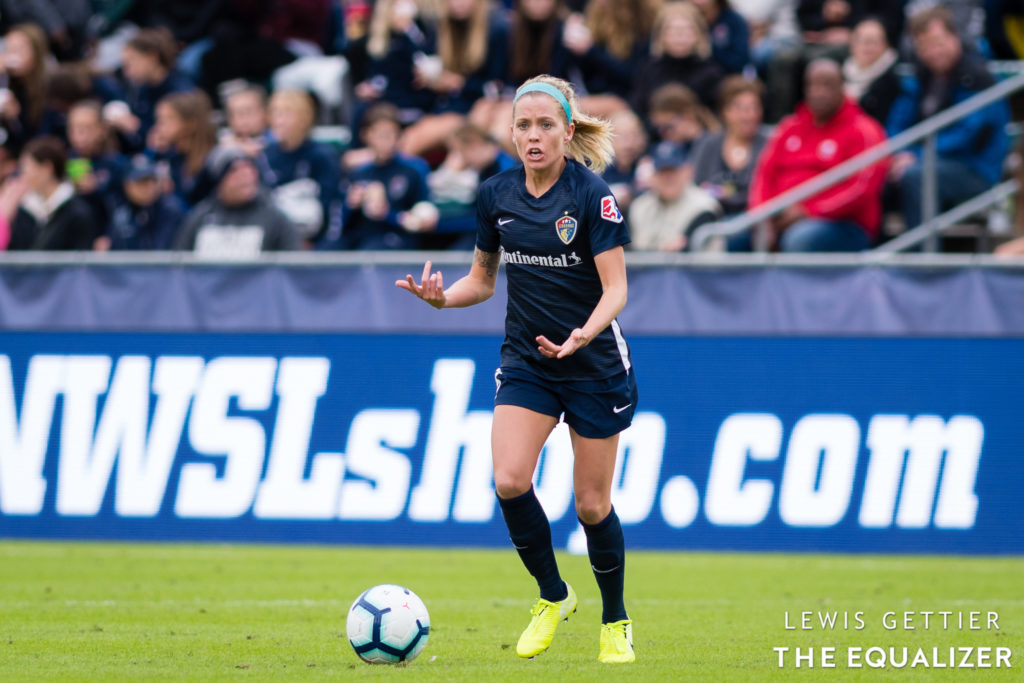 CARY, N.C. — There really isn’t a wrong answer when selecting the best player on the North Carolina Courage’s roster. There are the four U.S. internationals who won a World Cup this year. Three of the five finalists for MVP (none of them among that quartet) were MVP finalists.

Look deeper than that, though, and you’ll find the player who Courage teammates voted MVP each of the past two seasons, a player who was named to the National Women’s Soccer League Players Association’s Best XI — an all-league team which turned out to be a far more accurate representation of the season than the one the league officially released.

Denise O’Sullivan might be the best player on the best team in the league and one of the best club sides in the world. At the very least, her teammates and coach have deemed her the most valuable.

“That was the biggest gift we ever got,” Courage head coach Paul Riley said.” “What a player this young lady is, oh my God. And she’s improved so much, she’s almost—out of the whole team—the one player we can’t play without. That’s what she’s become.”

O’Sullivan plays in a rather thankless position as one of the team’s two holding midfielders. She doesn’t score goals, making it hard to stand out on a team which continues to break its own scoring records and that earlier this season put up six goals each in back-to-back game.

She’s an Ireland international, so she hasn’t sniffed a World Cup. She’s listed at 5-foot-4 and she’s all bones, hardly the look for a position often looked at as the enforcer in midfield.

Add it all up, and it’s easy for the casual observer to completely overlook O’Sullivan. Her game is one of simplicity and nuance — being in the right position at the right time, playing the way she is facing, getting stuck in on tackles to prevent counter attacks. These are the more thankless tasks performed by Denise O’Sullivan.

Riley and Crystal Dunn describe O’Sullivan as the “engine” of the team. Sam Mewis says O’Sullivan is the “glue” that holds the team together, winning tackles and spraying the ball wide from a deeper position. Mewis, one of those U.S. World Cup winners and a player who O’Sullivan says she looks up to, is the other No. 6 in the Courage’s system. The height disparity between the O’Sullivan and the 5-foot-10 Mewis can’t not be noticed. But still, O’Sullivan pulls her weight on the defensive front.

“Since she’s been on this team, I think she’s played the role perfectly and almost redefined it for us,” Mewis said. “[She’s] shown that you can play any position at any size.”

Zero goals and one assist doesn’t jump off the page on a team that scored a record 54 times this year, but O’Sullivan’s 85 percent passing success rate is negligibly close enough to Mewis’ proclamation O’Sullivan completes every pass.

The story is that much more amazing when you consider how O’Sullivan arrived. She was unhappy with her lack of playing time at the Houston Dash midway through the 2017 season, and the team agreed to waive her. Courage technical advisor Charlie Naimo recently described to The Equalizer how he was sitting on the beach when the league email came through that O’Sullivan was available on the waiver wire. He was floored that Houston didn’t try to get something in return by trading her.

O’Sullivan said this week that she was on the verge of signing for USV Jena in Germany’s top flight. She was sipping on a coffee during a brief visit to Chicago when Paul Riley called O’Sullivan and told her he valued her and wanted her to come to North Carolina. O’Sullivan trusted the veteran coach, and four days later, she was on a flight to Raleigh. Everything since then has been upward trajectory, she said.

O’Sullivan is starting to get the credit from her peers, but she remains an overlooked cog in the closest thing to a dynasty that women’s professional soccer in the U.S. has seen. That she remains underrated is perhaps a product of the league itself, Courage defender and New Zealand international Abby Erceg says. The NWSL is a league that was built by and for U.S. Soccer. Earning recognition is especially difficult for those who don’t have the platform of the U.S. national team.

“Especially as an international coming into this league, it’s tough,” Erceg said. “If you’re not close to being in the U.S. team, if you’re not in the U.S. team, if you haven’t been called up going into the U.S. team in any kind of shape, it’s really difficult to make a name for yourself. You have to have an absolutely outstanding season. I think she’s getting there. She’s starting to create a bit of a name for herself, but it’s not this kind of thing where you have one really good game or one really good season. You need to have two, three, four good seasons before people start to take notice.”

On Sunday, the Courage will play the Chicago Red Stars in the NWSL Championship. A victory for North Carolina, on their home field, would mark a second straight title and a third in four years (to go with their 2016 triumph as the Western New York Flash) to go along with three straight Shields and last year’s ICC title.

If North Carolina is to prevail, you can bet that O’Sullivan will be mixing it up in the middle.