The NWSL Championship is an epic battle of center backs… or is it? 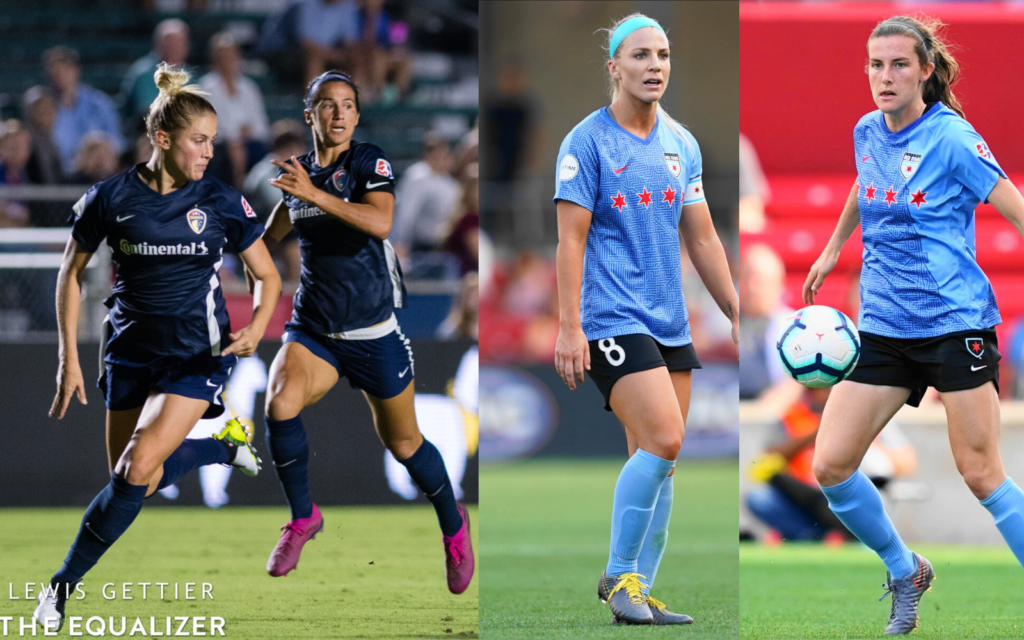 CARY, N.C. — Paul Riley said he would be happy if Julie Ertz stays out of the midfield. Rory Dames said no decisions have been made as to how the Chicago Red Stars will set up against Riley’s North Carolina Courage in Sunday’s National Women’s Soccer League Championship.

“I’d rather have Julie J. in the back than have her in the midfield disrupting us,” Riley, the North Carolina Courage coach, said referencing Ertz by her maiden initial from when she was Julie Johnston. “I’m happy if she plays in the back to be perfectly honest with you.”

Countered Dames, the Red Stars’ head coach: “I would say that we haven’t made a decision on the weekend yet of whether we’re going to play Julie on the back line or in the midfield.”

Earlier this year, when the Red Stars controlled the top pick in the NWSL draft, the question was not whether they would pick Tierna Davidson, but how they would use her. Touted as a central defender, Davidson’s role on the U.S. team had evolved to that of a backup fullback. Ertz’s role seemed clear as a holding midfielder — although she did wind up getting some World Cup minutes on defense.

GET 40% OFF YOUR FIRST YEAR ONLY THROUGH THE PLAYOFFS

Ertz’s position has been a hot topic ever since Dames sent her to the midfield in 2017. Former U.S. coach Jill Ellis followed suit with the national team and Ertz has been one of the world’s best ever since. As this NWSL season started, Dames wanted to give Ertz minutes in the midfield to get her best prepared for the World Cup. He also had another problem: his midfield was banged up.

“Through a majority of the first half of the year, between Morgan [Brian], Vanessa [DiBernardo], and Dani [Colaprico], one of them was always carrying a knock,” Dames said. “For probably five or six games, two of them were struggling. So putting Julie in the midfield was the logical thing to do. We also knew Julie was going to play midfield at the World Cup so we wanted to get her as much time as we could in the few games that she played before she left for that as well.”

Meanwhile, Davidson spent most of her time at left back, leaving the center-back positions to be manned by Katie Naughton and Sarah Gorden. But a funny thing happened when the calendar turned to September. Following a 3-0 drubbing to Portland Thorns FC, Dames shook up the lineup. Naughton went to the bench. Gorden and her incredible speed moved to the outside. Ertz and Davidson became the center-back pairing. In the six games since, the Red Stars have conceded two goals — and won all six times.

Dames said a few weeks ago that he had always envisioned Ertz and Davidson playing together in the back. He reiterated Tuesday that it always made the most sense to play a lineup that included the three midfielders — Brian, DiBernardo, and Colaprico — plus Ertz and Davidson. But heading into the biggest game in franchise history, the only coach the NWSL-era Red Stars have ever known is balking at keeping them there, at least publicly.

Behind a heavy 2019 workload, Julie Ertz leads Chicago into another postseason

On the other side, there is no doubt. The Abbys — Dahlkemper and Erceg — have started every league match together that they have both been available for since 2017. They have monopolized the Defender of the Year award the last two years, Dahlkemper winning in 2017, Erceg last year. They will start together again in Sunday’s final, their third in a row as a partnership.

“They are one of the best, if not the best, center back pairings in the league,” Dames said.

Riley said that one of the tweaks he made ahead of the 2019 season was trying to get his center backs to take more space in front of them. It has worked out, at least to the extent that the Courage again yielded the fewest goals of any NWSL team.

“I think we’re a tough test for everyone in the back,” Riley said of his team, which also led the league in goals scored, breaking the league record they set last season. “But they are both very good. They can play out too. Our two center backs are good at playing out too. I think you’ve got four of probably the best center backs in the world playing against each other on the weekend. Nobody really talks about the center backs but they’re the rock bed of the team.”

Sam Kerr is NWSL’s first two-time NWSL MVP
With Davidson out for the NWSL Championship, how does Chicago fix it’s defense?