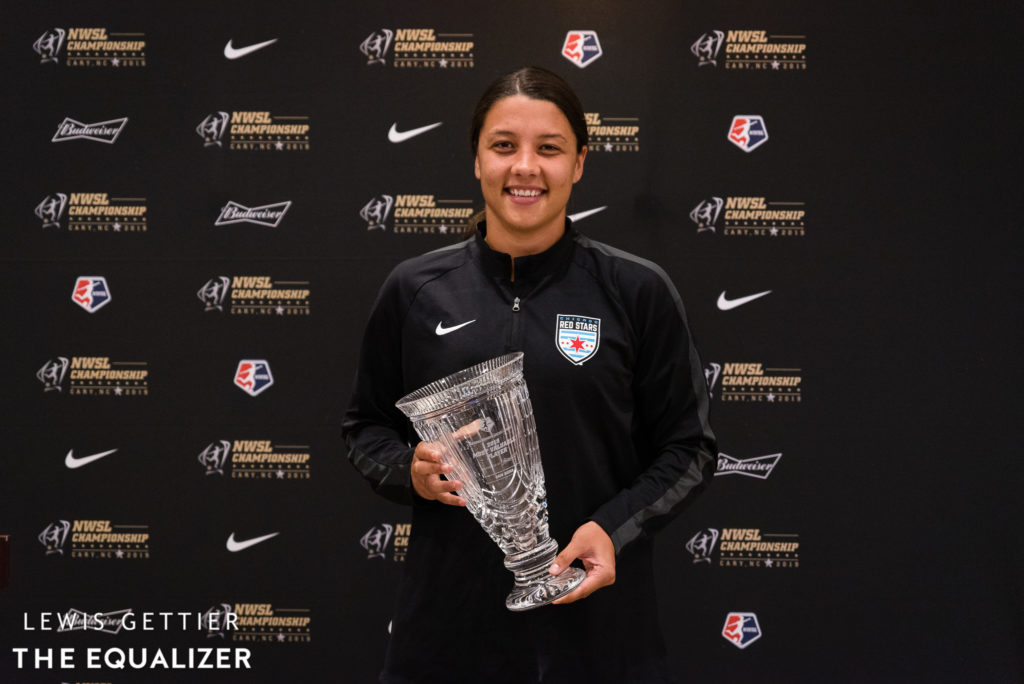 Sam Kerr has made more National Women’s Soccer League history as the first player to be named Most Valuable Player two times.

Kerr was announced as the 2019 MVP at the conclusion of the Chicago Red Stars’ media day session at the Duke Energy Center for the Performing Arts in Raleigh, North Carolina on Friday. She previously won the award playing for Sky Blue FC in 2017.

Kerr, 26, scored 18 goals in 21 matches during the regular season, breaking her own single-season league mark from 2017. Included in the 18 was a hat trick against the Orlando Pride on June 30 in her first match after returning from the World Cup. The hat trick was her fourth in NWSL play, also a record.

This marks the sixth time in seven seasons that the Golden Boot winner has been named NWSL MVP. The only exception was 2018, when Lindsey Horan of Portland Thorns FC was named MVP while Kerr won the boot.

Kerr won from a group of five finalists, all of whom will participate in Sunday’s NWSL Championship. Red Stars teammate Yuki Nagasato was also a finalist as was the North Carolina Courage trio of Debinha, Kristen Hamilton, and Lynn Williams.

Williams is a former MVP, in 2016, and also the last player besides Kerr to win the Golden Boot. If the Red Stars win Sunday, Kerr will join Williams as the only MVP to take down the NWSL Championship in the same season.

US Soccer finalizing deal to make Vlatko Andonovski next USWNT coach
The NWSL Championship is an epic battle of center backs… or is it?