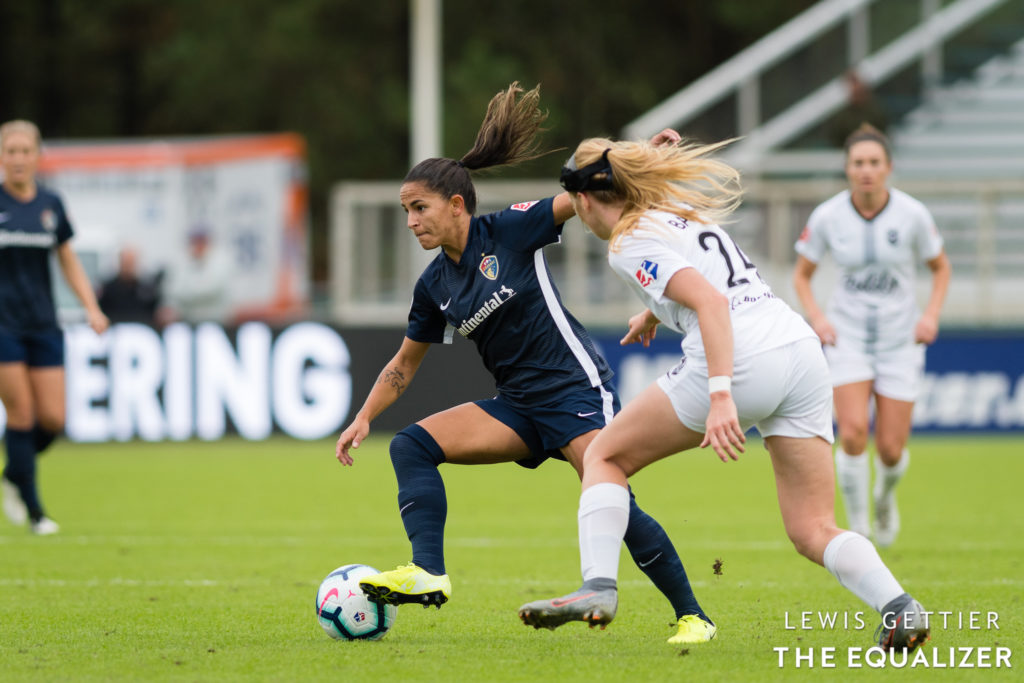 The North Carolina Courage weaved their way in and out of the box and took shot after shot. However, nothing could find the back of Casey Murphy’s net. A team that is so dominant at home couldn’t find the back of the net until the 88th minute. Momentum swung in the favor of Courage when Lauren Barnes was called for a handball and Heather O’Reilly lined up the penalty kick.

It was the first of four goals that the Courage went on to score, providing a 4-1 victory in front of their home fans. They’ll be back in front of those fans next weekend, when they take the field for their third-straight NWSL Championship match.

After a quick equalizer from Ifeoma Onumonu in second half stoppage time, the Courage took extra time and ran with it. Debinha scored on a stellar free kick, sending the shot over a four-person wall made up of Reign players and Sam Mewis. However, the Courage weren’t quite done there.

Kristen Hamilton entered the match in the 96th minute. It took her 10 minutes to set up the third Courage goal, but it counted as an own goal against Barnes. To cap it off for the Courage, Crystal Dunn, who finished the match with eight shots and five on goal, finally found her semifinal tally.

Despite the scoreline, Reign FC kept the Courage at bay for the majority of the match. Casey Murphy made 11 total saves against Courage attackers, including four against Dunn and three against Mewis. Murphy joined the Reign in May, signing originally as a third-string goalkeeper. However, injuries to Michelle Betos and Lydia Williams forced the 23-year-old into quick action.

Meanwhile, on the other end of the pitch, Canadian international Stephanie Labbé made three saves to deny Megan Rapinoe, twice, and Bethany Balcer.

The Courage will now get ready for their third-straight NWSL Championship match. They have no travel plans, though, as WakeMed Soccer Park was selected to host the final this season. However, the Courage will await the final of Portland vs. Chicago to find out who their opponent will be.

The Goals and Saves

After Lauren Barnes is issued for a hand ball, Heather O'Reilly takes the penalty and converts it past Casey Murphy, who has been on fire today.#NCvRFC | 1-0 | #NWSLPlayoffs pic.twitter.com/0nv1Mm4Hve

STUNNER 😱@ify_on22 levels the match at the death!

WOW@Debinha restores the lead to @TheNCCourage with a sheer piece of magic.

The @CaseyMurph Show is live from Cary.

.@TheNCCourage takes a commanding lead into the second half of extra time.

Running away with it 🏃‍♀️💨@crysdunn_19 tacks on a fourth goal for @TheNCCourage.

Tobin Heath-Casey Short match-up could determine Thorns-Red Stars semifinal
Reign FC did everything right against the Courage, and it still wasn’t enough