The Lowdown: My 2019 NWSL awards ballot 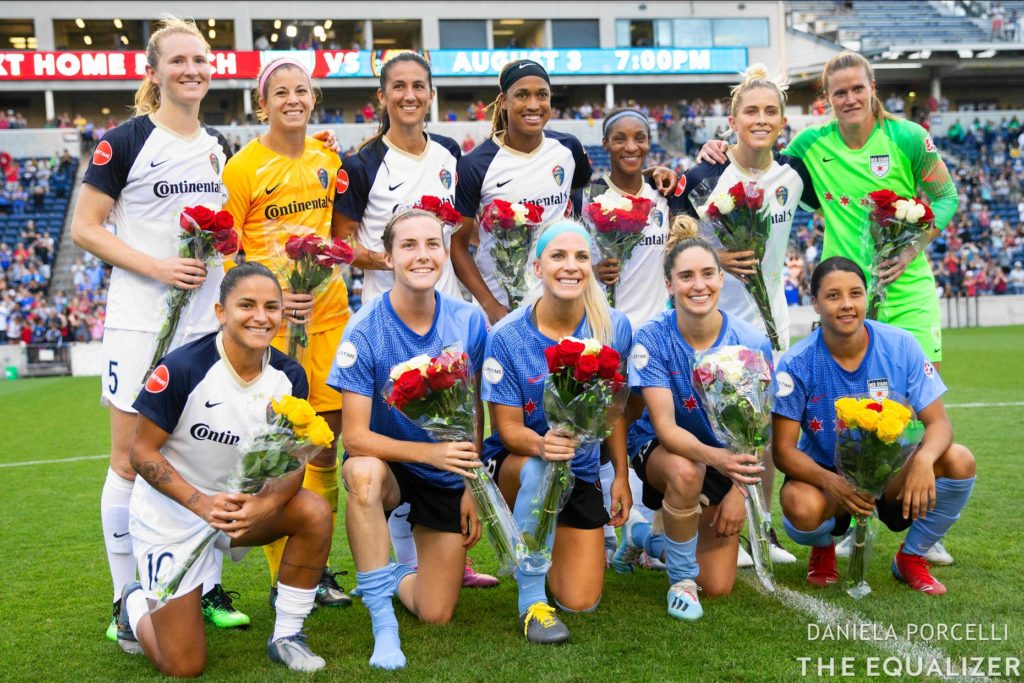 It’s that time of year again, so let’s get right to it. Here is my 2019 National Women’s Soccer League awards ballot.

As discussed in my piece about key players for every playoff team, Sam Kerr’s 18 goals have dragged the Chicago Red Stars into the playoffs in a season where they have struggled to find secondary scorers. She scored 18 goals to break her own league record and when she left for the World Cup the team was blanked three straight times. She is the most dangerous player in the league and must be accounted for at all times. Easy pick that should make her the first person to win the award twice (2017).

Honorable mentions: Christen Press was trending toward maybe winning this until the Royals swoon down the stretch coincided with a lack of production. Kristen Hamilton and Midge Purce both kept their teams afloat during a World Cup that depleted both the Courage and Thorns. Casey Short made it nearly impossible for opposing teams to attack her side of the pitch.

Casey Short did not get to realize the dream of making the U.S. World Cup squad and she spent the season squashing the dreams of many opposing attackers who dared take her on. Short, who was voted to the NWSL Team of the Month all six times, was easily the best 1-v-1 defender in the NWSL this season. More importantly, she was rarely caught out of position even as her attacking play improved. This is another easy call. If Short winds up with the award – as she should – it will mark the first time an outside back wins.

Honorable mentions: I will always remember this as the year Emily Menges and I were called for the same number of fouls—zero. In her case, it was across 1,665 minutes. Lauren Barnes was tremendous for a Reign team that needed to be tight in back while they waited for their scorers to find form.

A year after setting the league record for most saves (shared with Kailen Sheridan) Aubrey Bledsoe emerged as the top goalkeeper in the NWSL. Always an excellent shot stopper, this season Bledsoe began dominating her box and rarely gave up a bad rebound. She was the last and most effective line of defense for a Spirit club that took massive strides forward.

Honorable mentions: Nicole Barnhart turned back the clock with a vintage season that nearly ended in my top spot but a few soft ones late in the season relegated her here. Alyssa Naeher got major plaudits for her play the World Cup but not enough for being superb with the Red Stars. 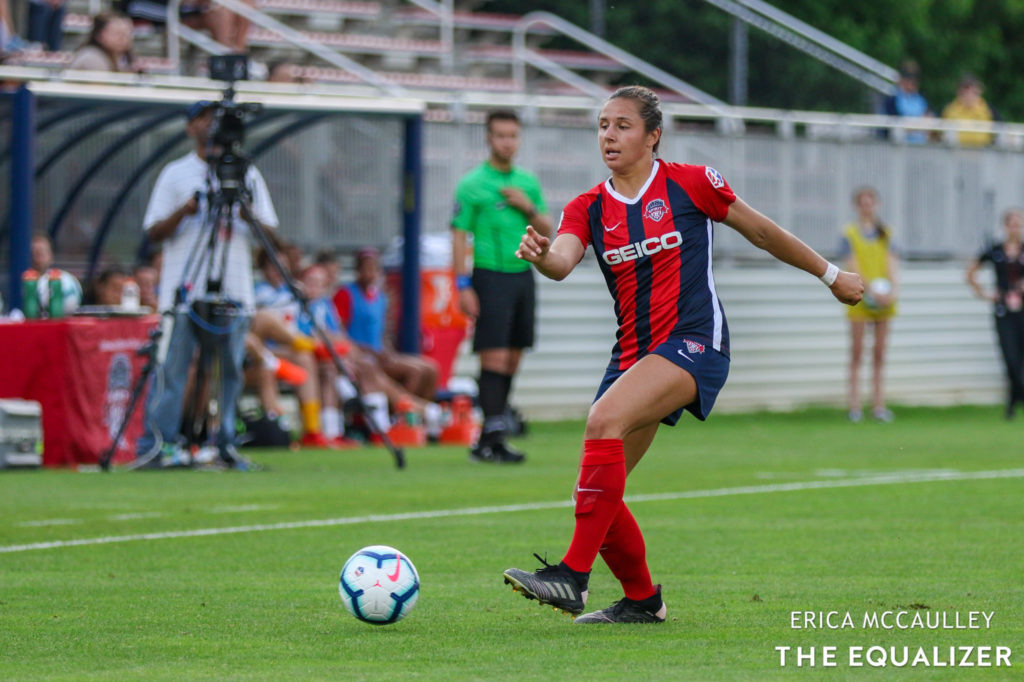 Staab, the 4th overall pick, stepped into the back line and played 90 minutes in all 24 games, rarely looking out of place. And it wasn’t as if Staab was inserted into a ready made back four that she could seamlessly blend in to. Instead she was part of a unit whose only regular veteran of more than two seasons was Tori Huster who is best suited as a midfielder. The future is bright for Staab, who should become the first defender to be Rookie of the Year since Julie (Johnston) Ertz in 2014.

Honorable mentions – Bethany Balcer is probably the single best story of any rookie we have seen in domestic WoSo, and I will have few qualms when she winds up winning the award as I expect. Tierna Davidson was just solid enough to be overlooked while playing for a very good side and leaving to be part of the World Cup.

Every week, Reign FC’s injury report read like a novella, but every week they were competitive and finally emerged from a tight pack late in the season to snag the final playoff berth. Jess Fishlock joined late, then tore her ACL at the end of June. Megan Rapinoe did not play before the World Cup, and then for several weeks after it. The top two keepers both went down injured. Numerous other injuries plagued the Reign, and yet Andonovski found a way to cobble it together, even getting important goals out of his NAIA discovery Balcer. If he winds up taking the U.S. women’s national team job at the end of the Reign season he will leave after what was likely his best NWSL coaching job.

Honorable mentions – Richie Burke got the Spirit on the same page early and got many people in the area to forget about the previous two disaster seasons. Paul Riley navigated an even start, a goalkeeper crisis, and impossible-to-live-up-to expectations after last year’s record-setting season, and the Courage still walked away with the Shield.

The rest of the Best XI

As seen above. Hoping it’s enough to get her a look in the next international cycle.

Short, the last defender cut before the World Cup, is making it difficult to ignore her for the Olympics despite a shorter roster. Menges and Barnes have long been players on the cusp of the United States. Hinkle finished strong after an even start to the season and her service from the outside is as strong as ever.

Debinha has quietly emerged as one of the best two-way midfielders in the league. She has been in the middle of much of what went well for the Courage. Dunn missed many games for the World Cup but was easily the best player before she left and wound up with seven goals and four assists in less than 1,000 minutes. Sullivan was another who excelled after being a late cut before France and the only thing that kept her from playing every minute was another call-up.

Kerr’s exploits speak for themselves. Press has enjoyed the best year of her soccer career and had moments when it looked like she would drag the Royals into the playoffs. Looking forward to her 2020. Nagasato led the league in assists and continued her telepathic connection with Kerr and edged out Midge Purce and Lynn Williams here.

World Cup MVP – Kristen Hamilton (honorable mention to Midge Purce): Covered above, these two along with Purce’s Thorns teammate Simone Charley were the stars of the show while the focus of the soccer world was in France.

Most Improved Player – Kailen Sheridan, Sky Blue FC: Now a World Cup vet, Sheridan greatly improved the tactical side of her game which was a nice addition to her athleticism and shot-stopping. (Had this been a real award, the vote would probably go to Bledsoe or Hamilton, but since they have already been mentioned…)

Comeback Player of the Year – Cheyna Matthews, Washington Spirit: Returned from pregnancy and found her goal-scoring boots, starting with a brace on Mother’s Day weekend. Matthews also caught on with Jamaica and wound up at the World Cup.

Newcomer of the Year – Claire Emslie, Orlando Pride: The 25-year-old Scot, who played her college ball at Florida Atlantic, was a bright spot in Orlando this season and should only get better with a year under her belt and hopefully a better supporting cast in 2020.

Acquisition of the Year – Casey Murphy, Reign FC: The Reign took advantage of her Sky Blue rights expiring and convinced her to join a crowded keeper roster. By Memorial Day, circumstances had her as the starter and she was good enough to help the Reign sneak into the playoffs.

— Remember when the Thorns average attendance dropped in 2018? This year they are the first WoSo club to average 20,000 for a season.

— The Royals joined the Thorns as the only team to average over 10,000 fans. The Thorns have done it all seven seasons and have had only one game that came in under 10,000.

— Laura Harvey told the assembled media at Rio Tinto Stadium over the weekend that she will not be the next coach of the U.S. national team. She then returned to the media room to say she intended to return as Royals head coach.

— The following position players were on the field for all 2,160 minutes of the regular season: Amber Brooks (Dash), Jaelene Hinkle (Courage), Sarah Killion (Sky Blue), and Sam Staab (Spirit). The goalkeepers were Nicole Barnhart (Royals) and Jane Campbell (Dash).

— Special tip of the hat to Brooks for playing the entire slate for the third year in a row. Her league-record consecutive minutes streak is at 6,483.

— Color me surprised that Barnhart played Saturday night after the Royals had been eliminated. That meant Abby Smith did not see the field the entire season.

— If the NWSL is really planning on expanding, now would be a nice time to let people know. With the season over for more than half the teams, draft prep is in full force not to mention any impending expansion draft that would drastically alter the way teams go about their offseasons.

— I don’t know what was involved in ESPN shooting the Cheney Stadium match from the side that highlighted more stands and less outfield wall, but hopefully we can see all the games from that angle in 2020.

— Here is the most up-to-date 2020 NWSL Draft order which has been independently tracked and not confirmed by the NWSL:

Behind a heavy 2019 workload, Julie Ertz leads Chicago into another postseason
Arsenal aim to return to European glory days