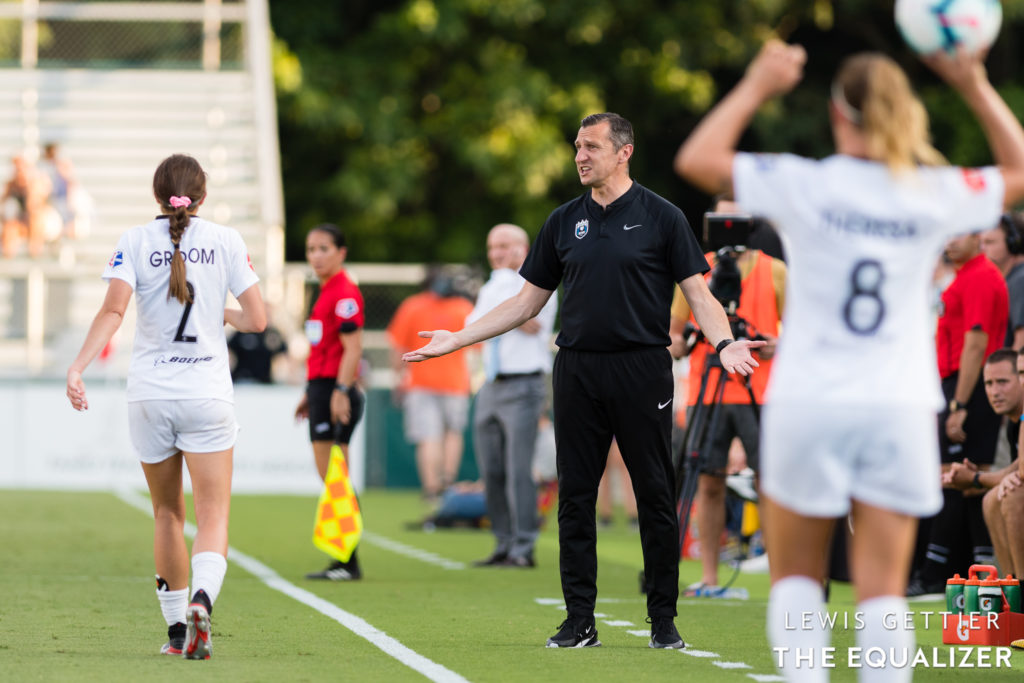 Reign FC are headed to North Carolina to play the Courage in next week’s National Women’s Soccer League semifinal after drawing the Orlando Pride, 2-2 on Saturday in their regular-season finale.

Marta’s late equalizer gave the last-place Pride a share of the points and made sure there would be no late-night drama in Portland. Reign FC had to win to have a shot at the No. 3 seed in the playoffs. Instead, Portland Thorns FC will be the No. 3 seed visiting the Chicago Red Stars on Oct. 20.

On Saturday, Rachel Hill opened the scoring for Orlando in the 24th minute, calmly rounding Reign goalkeeper Casey Murphy after Claire Emsley’s brilliant first-time through ball put Hill in behind.

Reign FC, however, responded with two goals before halftime. Darian Jenkins headed in Steph Catley’s cross at the back post in the 34th minute, and Jodie Taylor put the visitors ahead four minutes before halftime when she out-muscled Alanna Kennedy.

Jodie Taylor with the goal and THAT BALL from Rumi Utsugi 😍

A thing of beauty from Marta 😍

Toni Pressley is back on the field for the Orlando Pride in their season finale, just over two months after beginning treatment for breast cancer. 👏 🙏#ORLvRFC #NWSL pic.twitter.com/sXQlDJa93E

Emslie left the match just before halftime. She suffered an apparent head injury in the 29th minute when she collided with Reign FC midfielder Allie Long. Emslie played on before voluntarily sitting down on the field about 15 minutes later. The trainers came onto the field and escorted Emslie to the locker room.

This week marks Concussion Awareness Week for the NWSL and U.S. Soccer. The league has seen multiple players carry on in matches this season after suffering apparent head injuries. Emslie eventually removed herself on Saturday.

On August 17, Washington Spirit midfielder Rose Lavelle sustained a head injury in the opening half-hour against Portland Thorns FC and played the entire 90 minutes after an apparent disagreement with training staff on the sideline. The Spirit listed her with a “general head” injury for roughly a week before admitting she was in concussion protocol. A league spokesperson at the time said Lavelle was not determined to have had a concussion at the time of the incident. 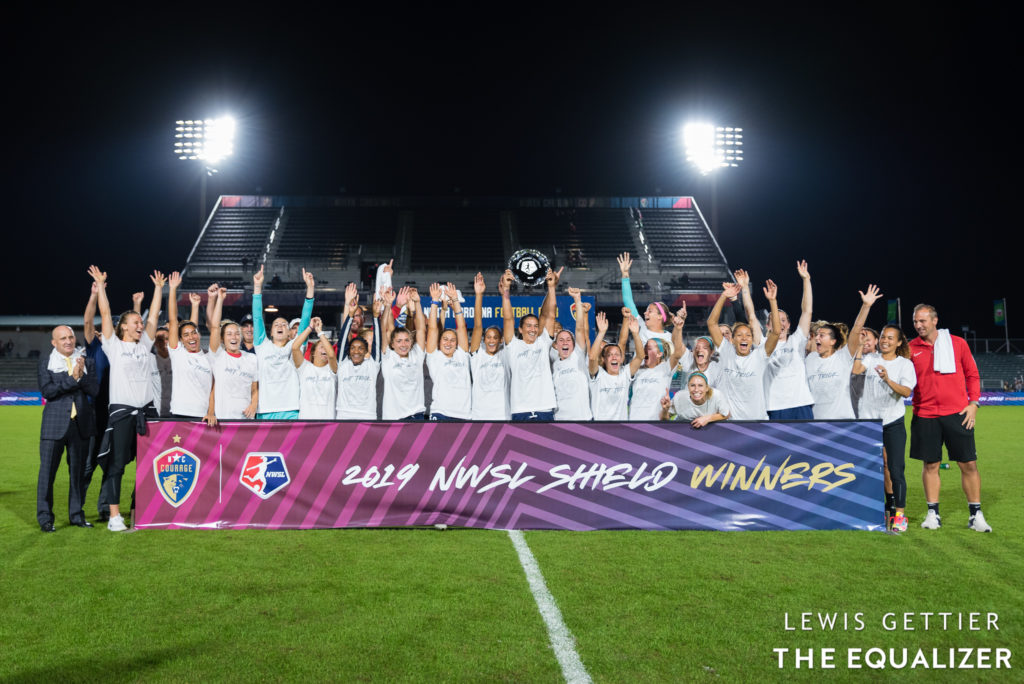 Last year, the North Carolina Courage made history. They didn’t just do it with a successful season, that only saw just one loss. Instead, the Courage set an NWSL record for the most goals scored by a club in a single season, with 53 team goals. However, just one year later, the record was broken again — by the Courage. On Saturday night, Jess McDonald scored her second goal against Sky Blue FC, resulting in the club’s 54th goal.

McDonald also found the back of the net in the 16th minute. Debinha rounded out the rest of the goal scoring for the Courage, notching the second Courage goal in the 28th minute.

Counterattack ends in a finish from @J_Mac1422.

Meanwhile, Sky Blue FC found the back of Katelyn Rowland’s net twice. Carli Lloyd struck first, tying up the match in the 26th minute. However, after going down 3-1, Sky Blue FC needed a goal to build morale. Domi Richardson stepped up late in the second half with an unassisted 86th minute goal. However, it was too little, too late for Sky Blue.

Another great goal in the books for @CarliLloyd.

Meanwhile, Sky Blue FC found progress this season. After only winning one match last year, Sky Blue managed to tally five wins after the firing of Denise Reddy. After finishing last season with only nine points and in last place, Sky Blue bumped up one spot to eighth place, and tallied 20 points.

Now, the Courage will wait until the evening to see if they will face Reign FC or the Portland Thorns. If the result stands between Reign FC and Orlando — with Reign currently leading — and Portland records a loss to Washington, the Courage would face Portland. However, if Portland wins tonight, Reign FC will take the trip to Cary.

.@Debinha7 gives @TheNCCourage the lead back in ⚡️ fast fashion.

What a great strike by @Domi_Richardson!

Ending their respective seasons, the Utah Royals FC hosted the Houston Dash for a regular season finale at Rio Tinto Stadium. The Royals picked up three points, putting them in sixth place, before the Spirit finished their match with Portland. Christen Press wasted no time in finding the back of Jane Campbell’s net early in the second half. However, it was teammate Amy Rodriguez that scored the game-winning goal.

Houston did manage a slight fight back. In the 78th minute, Kristie Mewis picked up a pass from teammate Sofia Huerta and calmly put it past Nicole Barnhart. However, the Dash couldn’t muster up another legitimate chance and left Rio Tinto with zero points.

Both teams will now take the offseason to restart and refresh. Utah could potentially have to find a new coach as well, with talks of Laura Harvey being one of the front runners for the U.S. Women’s National Team job. However, no official announcement has been made by USSF yet.

Meanwhile, James Clarkson finished up his first season as manager of the Houston Dash with a record of 7-5-12.

Lovely build-up play by @UtahRoyalsFC and A-Rod finishes it off.

The fightback is on for @HoustonDash after a @KristieMewie close-range finish.

The Portland Thorns thankfully got the resulted they needed before their match even started. The Thorns were watching patiently as Reign FC took on, and drew, with the Orlando Pride. With the draw, Portland retains the third place spot. Meanwhile, Reign FC takes fourth place.

Reign FC became the final playoff team to secure a spot, edging out the Washington Spirit two weeks ago. Washington let out their missed playoff frustrations against the Portland Thorns at Providence Park. The youthful Spirit defense kept tabs on players like Tobin Heath, Christine Sinclair and Lindsey Horan, keeping them all scoreless.

However, Washington was out-powered on offense, only taking five shots throughout the whole night. Bayley Feist was the only player to record a shot on goal, which was saved by Thorns goalkeeper Adrianna Franch. Meanwhile, Spirit goalkeeper Aubrey Bledsoe kept herself busy, making five saves on the evening.

While the Spirit head back to the East Coast and plan for next season, Portland will prepare to take a trip to the Midwest for their semifinal match against the Chicago Red Stars on Sunday.

.@AubreyBledsoe is playing in a big role keeping things level.

.@AubreyBledsoe is 🔥 after this double stop.