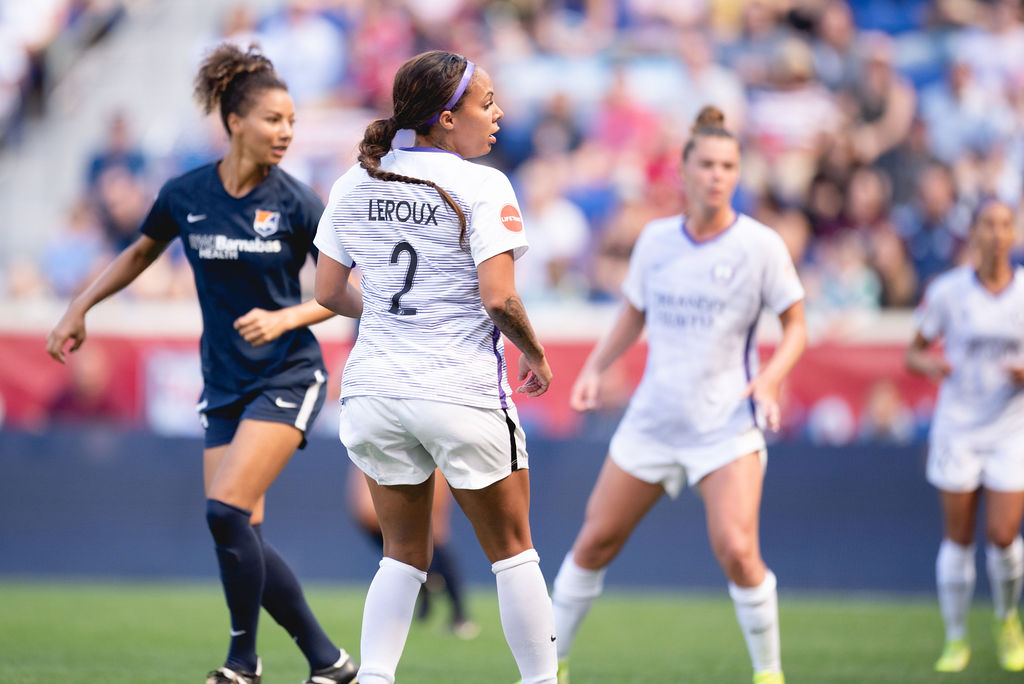 The Orlando Pride’s loss to the Washington Spirit over the FIFA break secured them the dubious distinction of finishing last on the National Women’s Soccer League table this season. That won’t go down well with anybody at the club, but a small consolation is that the Pride appear to be on the way to using their natural first-round pick for the first time in their history. Unless the league follows through with expansion, that pick will be No. 1 overall.

Orlando’s roster is sure to look quite different come March, but one player they can expect to have back is Sydney Leroux. A member of the 2015 World Cup champion United States squad, Leroux announced earlier this year that she was pregnant with her second child. Consequently, she missed much of the season but the Pride never moved her to the Season Ending Injury/Maternity list, believing she could make it back in time to contribute before the end of the season. Two weeks ago at Red Bull Arena, she proved them right by playing the final four minutes in a 1-1 draw against Sky Blue FC. She upped it to 15 minutes against the Spirit last week.

“I just wanted to get it over with,” Leroux said after the appearance against Sky Blue. “It’s been such a long time coming. I’ve been training really hard, it’s just like get the first game over with. So it felt good.”

Several teammates came to the sideline to hug Leroux before she was officially waved into the match, and when it was over she received more plaudits from Pride players.

“It was very emotional at the end,” she said.

I love this game. This past year was filled with so many ups and downs but I made a promise to myself that I would come back. No matter how hard that would be. It’s been a long road but I did it. 3 months and one day after I gave birth to my baby girl. pic.twitter.com/t89zsaAVSh

Leroux said it was both easier and harder to come back from her second pregnancy. Easier, she said, because she knew what to expect. But harder because “my life is more chaotic.”

Leroux, who said she never had a target date for a return to game action, is mostly planning for next season anyway, especially since the Pride have long been out of consideration for a playoff berth in 2019. In a world where many expect players to hang up their cleats as soon as their time on the national team ends, Leroux is another who is pushing on at the club level.

“I just wanted to come back at some point in the end of the season and just take this momentum onto next season. So, I feel good,” she said.

Clearly not yet 90 minutes fit, Leroux will spend her offseason trying to build back to being a player who can be counted on for the long haul. Working in her favor is that her husband, Dom Dwyer, plays for the Pride’s brother club, Orlando City SC.

“Luckily my husband does the same thing as I do so we’ll be keeping each other accountable,” she said.

Leroux is likely to be back with the Pride if Dwyer is back at Orlando City, but beyond that there could be mass changes made to the NWSL’s Florida squad. There have been glimpses of good soccer during Marc Skinner’s first season on the sidelines, but they have been just that — glimpses. The embattled coach, who inherited a team with few draft picks and limited roster flexibility, sounds like a man ready to make changes for 2020.

“One of the things that I’m absolutely adamant about is we have to be super fit next year,” Skinner said in response to a question about how often Marta finds herself double- and triple-teamed without any open teammates in sight to pass to. “I don’t think we’ve been fit enough for long enough. We’ve had parts of games where we’ve controlled and then had a massive drop off a cliff. And that’s not acceptable. If you look at those moments, that’s when we’ve conceded. We’ve been in most games and we’ve just let ourselves down with our sharpness [and] that fitness. That’s something that there’s no excuse for it next year.

“We have to recruit the right way. We have to make sure we have the physicality to compete in this league but then mix it with the technicality and the hopefully we’ll have a better blend.”

Skinner, speaking before the No. 1 pick was locked up, said he will be much better prepared for this year’s college draft after a full year in the U.S. environment. The Pride have only made one first-round pick, taking Sam Witteman No. 10 in 2016. Without expansion, the 10th pick now falls in the second round.

“It’s one of the biggest and best ways to get talent into your team,” Skinner said. “We have to use that. If we don’t use that effectively then we won’t be here next year.

“I’m going to make sure that we have every focus on being that team that I’ve described this year. We just haven’t been able to get over the finishing line. And we have to next year. No doubt about that. We have a lot of work to do to be that team, definitely.”

On the draft process Skinner said: “We’ll be submerged in it.” 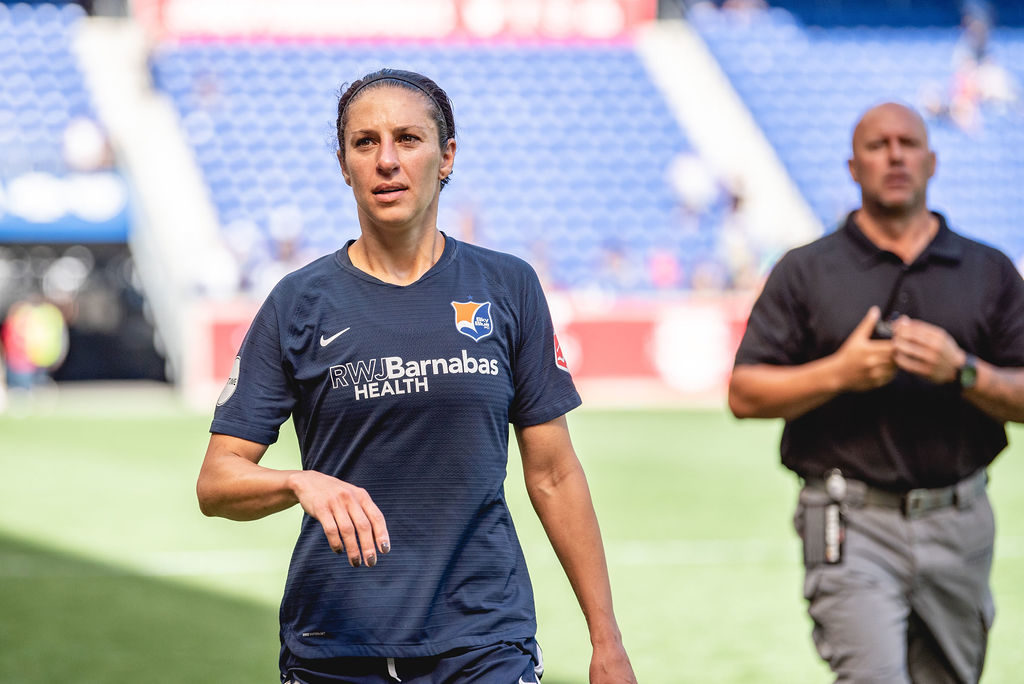 Leroux’s cameo against Sky Blue was tempered by her former World Cup teammate Carli Lloyd hitting the late equalizer for the home side. Sky Blue will finish in eighth place this season and draft second and third overall (pending expansion, and with the extra pick via the Savannah McCaskill trade to the Chicago Red Stars.) That is one position up from a season ago, but to the players and staff it feels like another world compared to the nightmare of 2018.

“Night and day” Lloyd said. “That was a bad place last year. This year is completely different, 80 percent different. It’s a way better environment all around in every capacity. Everyone’s performing their duties to the best they can do.”

Kailen Sheridan said after the end of the 2018 season that she wanted to be back at Sky Blue, but needed to make sure the club was committed to providing her with the environment she needed to get better as a goalkeeper. A year later and now a World Cup veteran with Canada, Sheridan is looking forward to a future in New Jersey.

Sheridan added, though, that playing at Red Bull Arena full-time should not be the dream. It should be the reality.

As of this writing, Sky Blue has still yet to announce a venue for 2020 and season tickets are not yet available.

As for Lloyd, whose future with the national team is a question mark with a new coach on the way in, she said she has hopes of playing the 2020 Olympics for the U.S. and remains committed to Sky Blue.

“Things are a little in flux. I’m just kind of waiting to see who the next national team coach is. A lot of people have said I’m done and written off, but as we all know, they can continue to talk,” Lloyd said, flashing her wry smile when the topic turned to her being written off. “So, I would love to play in another Olympics if given that opportunity and a fair shot.”

As for Sky Blue, she said: “I’m committed here. It’s my intention to continue to make the club and organization better. It’s something I’d probably have to reassess and speak with my husband and see where we’re at together and go from there.

“I definitely see myself playing as long as my body allows and right now I feel fantastic.”

— Total NWSL attendance cracked the 4,000,000 mark last weekend. The league will also finish with a record high average while seeing all nine clubs post a net gain over 2018.

— The Thorns can become the first team to average 20,000 fans in a season if they can get 23,334 to Saturday’s home finale. The Thorns have sold out their last regular-season match every year since 2015. All of those were when Providence Park, which was expanded this season, topped out at 21,144.

— If the Reign are going to win, it will be without Beverly Yanez. The midfielder was suspended for Saturday’s match in Orlando for an elbow that caught Thorns midfielder Dagny Brynjarsdottir high in their match two weekends ago.

The NWSL has suspended Beverly Yanez for Reign FC's final regular-season game for this elbow to Dagny Brynjarsdottir. Portland and Reign FC will jockey for 3rd and 4th on decision day. pic.twitter.com/TCEbiU90aM

— Six players have a chance to finish the regular season playing every minute. Of the six, only Sarah Killion (Sky Blue) plays higher up the pitch than on the back line. There are three defenders on the list — Amber Brooks (Dash), Jaelene Hinkle (Courage), and Sam Staab (Spirit) — plus a pair of goalkeepers — Nicole Barnhart (Royals) and Jane Campbell (Dash).