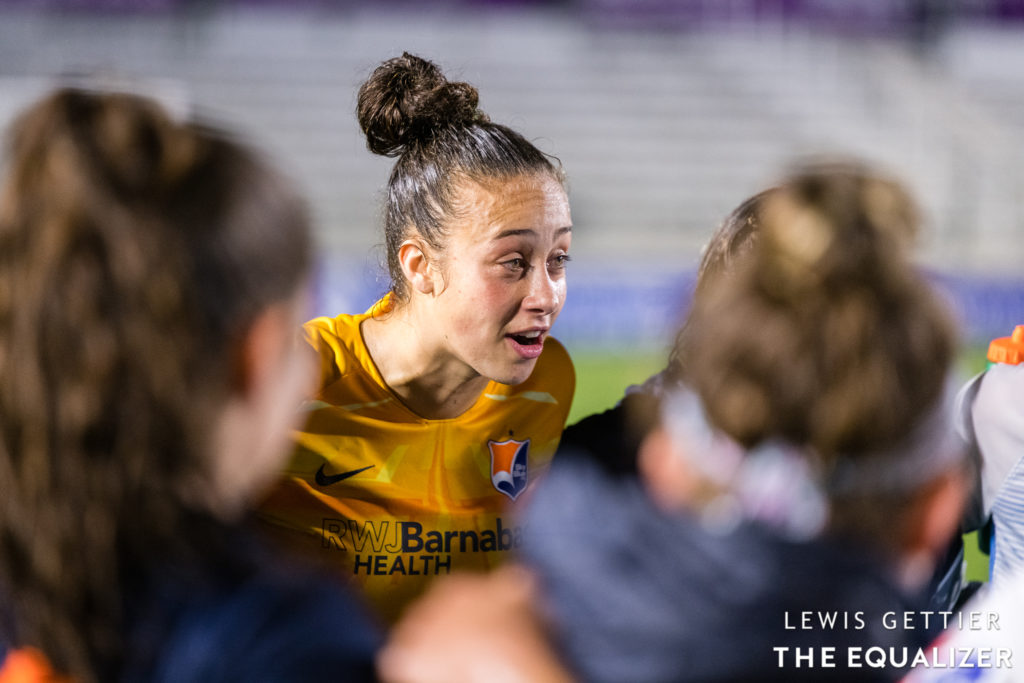 Between the staff turnover, the player exodus, voices of discontent around playing and living conditions, and an abysmal record, Sky Blue’s last few seasons have been beyond challenging. Since 2017, the club has seen the departure of two head coaches — each mid-season — their general manager, and a number of key players. In both 2017 and 2018, New Jersey conceded over 50 goals, the worst defensive records of any National Women’s Soccer League team in those years by a significant margin.

However, 2019 has brought promises of a new story for Sky Blue. The organization parted with general manager Tony Novo ahead of the season and fired head coach Denise Reddy — who had led the team to one win after a year and a half tenure with New Jersey — at the end of June. Since then, they’ve posted a record of 5-6-3, an improvement largely due to players stepping up with renewed energy. Playing in her third year with Sky Blue, goalkeeper Kailen Sheridan’s developing leadership role has been an enormous part of that transformation.

“I think this is my biggest growth year,” Sheridan said. She explained that she’s “[grown] as a person off the field to become a better player on it.”

Sheridan’s play this season has forced her into the conversation for NWSL Goalkeeper of the Year — an award with a number of outstanding candidates. Sheridan’s shot-stopping has always been an area where she’s excelled; she tied the Washington Spirit’s Aubrey Bledsoe with a record-setting 108 saves during the 2018 season and is the lone leader in saves this year. Of goalkeepers who have played in more than five games this NWSL season, Sheridan ranks first in save percentage.

These statistics speak to less quantifiable elements of Sheridan’s game: her intelligence, tactical skill, and positional awareness. The 24-year-old has showcased an aptitude for positioning herself to cut down the angle of an opposing player, and her ability to read balls in the air has developed significantly over her time in the NWSL. She routinely pulls out huge saves, such as a tip on Bethany Balcer’s shot to preserve Sky Blue’s clean sheet against Reign FC on Sept. 21.

Saves like this have become an expectation from @Kailen_Sheridan, but doesn't mean we will appreciate it any less.

“Obviously I might be a little biased,” said Canadian teammate Christine Sinclair after Sky Blue played the Portland Thorns to a 1-1 draw in August, “but I think Kailen [Sheridan], she’s the best goalkeeper in the world.” Sinclair specifically pointed to Sheridan’s save on a close-range Simone Charley header in the closing minutes of the match: “Pretty much any other goalkeeper in the league, that’s in the back of the net and you walk away with three points.”

Saves aside, Sheridan believes her growth into a leader at Sky Blue has been a major development to her game this season.

“I think I’ve grown as a leader because of the turnover that we’ve had,” she explained. “It’s kind of presented an opportunity for people to step up and I think myself — along with other people who have been here throughout the years — have really taken it upon ourselves… to make our situation as best as possible and really grow as players and as people with what we’re given.”

The Sky Blue FC organization has taken steps forward this year, particularly under the guidance of new general manager Alyse LaHue. There’s a more professional feel to the setup, from the training environment to two games at Red Bull Arena. But Sheridan points out that when it comes to results, “it’s ultimately up to us [the players] in [those] 90 minutes to put a great performance out there and do our best. We can’t just sit back and let other people control that.”

That recognition has led to a shift in the attitudes of Sky Blue players; they assumed a new coach would be the factor that would lead them to turn their team around. However, Sheridan and others came to the realization that “in those 90 minutes, the coach is not on the field.” What happens on the pitch is ultimately up to the players. Sheridan believes that the players’ acknowledgement of their individual responsibility has helped Sky Blue come together and step up as a team. “I think that’s allowed me to come out of my shell a little bit more and be a leader for this team,” she said.

“I’ve had the opportunity to really step up and put input in and ask questions, and so have a bunch of other women on the team,” she explained. She noted that players have been more willing to ask questions in team sessions, both on and off the field.

Sheridan views Sky Blue’s two-way communication as a tremendous positive for the team. “I think the mentality [that comes with those conversations] is huge for us;  it’s being bought in with the people around you,” she said. She believes that maintaining and building on this transparency and mindset is important, as it allows players and coaches to address issues as that arise and work towards a solution.

Sheridan has been a primary part of those solutions for Sky Blue FC through both her play on the field and her advocacy off it. An improved Sky Blue still has its defensive issues, but in Sheridan, they have an a shot-stopper and a leader for a future they hope remains on an upward trajectory. Sheridan wants her individual growth to mirror that path.

Speaking to her goals for next season, she emphasized “pushing on this track of getting better every single day, being a better goalkeeper than I was yesterday, and pushing myself in the areas I’m not comfortable… and see where I can get myself.”