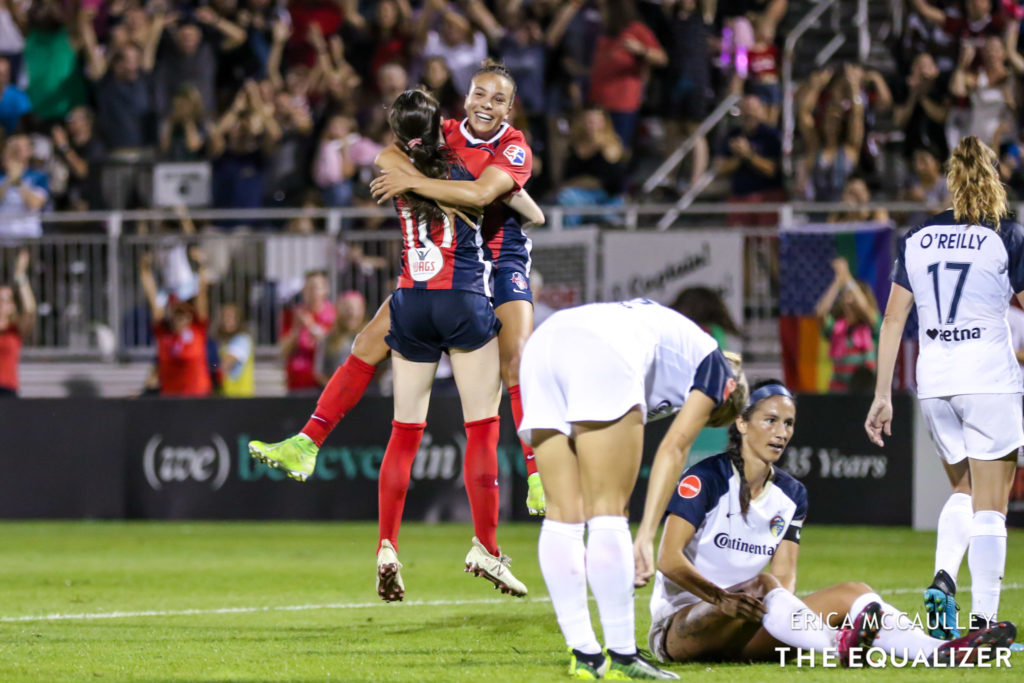 Mallory Pugh and Rose Lavelle scored 2nd half goals to lead the Washington Spirit to a come-from-behind, 2-1 victory over the North Carolina Courage in the home finale at the Maryland SoccerPlex. The win keeps the Spirit playoff hopes alive for at least another day and prevented the Courage from equaling the NWSL record for consecutive wins. Their streak ended at 6 leaving Seattle Reign FC an FC Kansas City with a share of the league mark.

The Courage had numerous opportunities to take the lead during an opening halft hey dominated and multiple chances to extend their lead before the Spirit commenced their rally. The best chance of the opening half saw Crystal Dunn flip a ball over the defense toward an empty far post only to see Paige Nielsen hustle over and somehow clear it off the line.

Dunn goes for the chip, but @Paigenielsen flicks the ball off the line! 😨

Save of the Week candidate? 🧐

The Courage finally broke on top in 1st half stoppage time. Jess McDonald found space deep on the right flank and sent a well-placed cross to the to of the six. That’s where Lynn Williams’ single touch went between Aubrey Bledsoe’s legs to make it 1-0. The goal was Williams’ 50th making her the second NWSL player after Sam Kerr to crack the half-century club.

In the second half, Dunn hit the crossbar once and then the post as it looked like the Courage were poised to pull away. They would live to regret the missed chances as the Spirit rallied.

First Pugh equalized. In the 75th minute she spun off defenders to find room on the left just as Bayley Feist played a perfect ball to play her in. Pugh calmly got herself into position and beat Stephanie Labbe with her left foot.

Pugh Pugh Pugh! 🚀@MalPugh finds the equalizer with 1️⃣5️⃣ left at the 'Plex.

Lavelle won it in the 84th. Receiving the ball at the top of the 18 she finagled her way around Abby Dahlkemper and then took advantage of a small seem between two defenders and blasted it in the goal to make it 2-1.

Far post, will you take this 🌹?@roselavelle knows how to score in big games.

The Spirit (8-8-6, 30 pts) will have to make due without Pugh or Lavelle when they head to Orlando during the FIFA window to play the Pride. It is a makeup of a postponed match from the last FIFA window over Labor Day weekend. If Reign FC do not win Sunday the Spirit will still have playoff life heading to Orlando.

The Courage (14-5-4, 46 pts) had already wrapped up the Shield and will not leave North Carolina again this season. They will close out the regular season October 12 against Sky Blue FC and then host a semifinal match October 20. The NWSL Championship, a week later, is at their home park, Sahlen’s Stadium.

Yuki Nagasato knocked in a rebound in the 85th minute to give the Chicago Red Stars a 2-1 win and knock Utah Royals FC out of contention for a playoff spot. The Royals came into the week well positioned but were defeated by a late goal for the second time in four days. They lost by the same score to a goal in the 86th minute at Reign FC on Wednesday.

The winning play was created when Katie Johnson played Sam Kerr through for a shot on goal. Nicole Barnhart came up with the save but Nagasato collected the rebound and finished to bury the Royals.

.@Yuki_Ogimi on the rebound for ⭐️!

Has Chicago found the game-winning goal?!

The teams traded first half goals. In the 40th minute, Vanessa DiBernardo unleashed a long-range shot at the end of a free kick sequence to make it 1-0.

The Royals struck back with a goal just two minutes later off a quality buildup. Gunnhildur Jonsdottir found Christen Press for a header at the end of the sequence. It appeared to be a goal that threw her team a lifeline but the Royals head home without a playoff appearance for the second straight season.

Sam Kerr did not score on the night, leaving her with 18 goals and a a third straight golden boot (barring a 6-goal game from Lynn Williams on October 12.)  She fell short of Marta’s all-time U.S. women’s soccer record of 19.

The Red Stars (14-8-2, 44 pts) won their fifth game in a row for the second time this season. They now face three weeks to prepare for their semifinal match on October 20. That semifinal will be in Chicago unless the Thorns defeat the Reign on Sunday and the Spirit on October 12. If that happens the Red Stars will travel to Portland. If they play at home the Thorns are the most likely opponent but Reign FC could still sneak into third.