The Lowdown: Three thoughts on the state of the NWSL 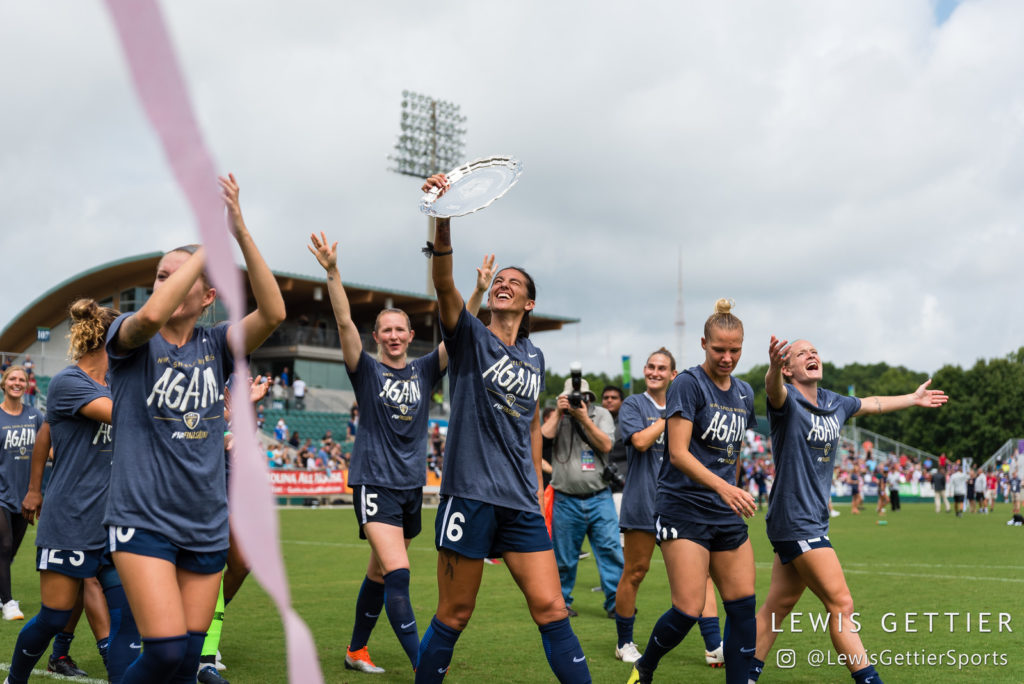 A National Women’s Soccer League season that has been murky and unpredictable at times reached a sudden point of crystallization during Week 22. The North Carolina Courage locked up a playoff berth on Tuesday and then the Shield on Saturday. Behind them, the Chicago Red Stars and Portland Thorns FC also booked playoff spots.

The final place likely comes down to Utah Royals FC and Reign FC — who play each other tonight — with the Washington Spirit clinging to hope that would take something just short of a miracle to come through.

Here are three revelations about an NWSL season that is suddenly nearing its conclusion.

It was not surprising in a season interrupted by the World Cup that there were some unusual fluctuations in form among all teams. The Courage are 14-4-4, which looks outstanding so long as it’s not being compared to last year. However, there were some troubling times in The Triangle which included a goalkeeping issue that led Paul Riley to hand a pair of starts to Sam Leshnak. Stephanie Labbé has since returned from the World Cup to lock things down with the struggling Katelyn Rowland as the backup.

The Courage are now 47-12-11 over the last three regular seasons and are back in the playoffs a fourth straight season including 2016, when the franchise was still the Western New York Flash. That is a remarkable run of success, with wins in more than two-thirds of all games played. They have seven more wins in three seasons than the Houston Dash have in their six-year existence. The Courage’s desire to continue being great is something not often seen in professional sports.

Riley even successfully navigated a sea change in midfield that has seen McCall Zerboni reduced to the odd woman out in a talented quintet. Six months ago, most of us thought Zerboni was heading to the World Cup. However, she was one of United States head coach Jill Ellis’ final cuts and is now struggling to find playing time for her club team, just a year after being named an MVP finalist.

Now there is another positional change that is sure to make the Courage playoff run even more interesting. Merritt Mathias tore her ACL last week against the Dash and it appears that Heather O’Reilly is going to be the right back going into the playoffs. O’Reilly announced before the season that this would be her last one and she was recently honored at Sahlen’s Stadium and handed a start that appeared to be mostly ceremonial. But now O’Reilly will be thrust back into the heart of it through the final month of her career. Along with being a World Cup champion and multiple Olympic gold medalist, O’Reilly has been on two NWSL Championship winning teams — last year’s Courage and the 2015 FC Kansas City when she assisted on the only goal in the final.

The Red Stars and Thorns also clinched playoff berths over the weekend, and it is the fourth straight year that this trio are all in the playoffs. For the Red Stars, it will be a fifth straight appearance. There is a very good chance the Thorns and Red Stars will play each other in the semifinals, but there remains an outside chance the Reign or Royals could run down the Thorns and finish third. The Red Stars, whose regular season ends Saturday against the Royals, are locked into the 2-3 match and cannot play the Courage in the semis for a third straight year.

Chicago and Portland will be under different kinds of pressure. The Red Stars have lost four consecutive semifinals, so in some ways their entire season is balled up into the success or failure in this year’s playoff opener. They have also not beaten the Thorns since 2013. In fact, their first ever win in NWSL stands up as their only win over the Thorns. They would love nothing more at this point than to break that streak and make their first playoff win at the expense of the Thorns as well.

As for the Thorns, their three year run of Shield-champion-runner up is exceptional so long as it is not being compared to the Courage. If they can close the deal and win the title again this season it will tip the narrative of this mini-era closer to their favor.

The great tennis player Roger Federer once lamented that he was a victim of his own success in the sense that if he lost just one set, everyone wanted to know what was wrong. It’s possible we have reached that point with Sam Kerr. Her easygoing demeanor and what appears to be effortless efficiency on the field have made her exploits look routine. With whispers getting louder that Kerr may depart the NWSL for a lucrative European deal, the next two or three games should be must-watch to see just what she has in store.

Saturday against the Spirit, Kerr scored two goals and assisted on the third. Her first goal gave her an even 50 during the three-year stretch beginning in 2017. The second goal was her 18th of the season, eclipsing the single season record she set two years ago with Sky Blue FC. Her impending golden boot — Lynn Williams is seven goals behind — will be her third in a row and fifth in a row in all leagues she has played in, including the W-League.

About the only thing missing from Kerr’s resume is success in the biggest games. Her NWSL and W-League playoff history is less than spectacular and she will have another try Oct. 20 when the Red Stars play either the Thorns, Royals, or Reign in the NWSL semifinals.

Back to this regular season, though. Kerr needs a brace on Saturday to become the first woman ever to score 20 goals in a professional soccer season in the United States. No one will be surprised if she does it. But if she doesn’t, keep in mind that Kerr missed three matches to represent Australia in the World Cup (she scored five goals there, including a four-goal game against Jamaica, but again was not at her best in Australia’s exit match against Norway) and had to overcome the mental and physical wear and tear that accompanies that trip.

NWSL, are you out there?

The Thorns clinched a playoff berth with their win over the Dash on Saturday. Only no one seemed to realize it at the time. This included The Equalizer, which did not include any mention of the Thorns clinching in an initial match report.

The reason for this seems obvious. If you line up the teams and look at the maximum number of points they all can attain, both the Royals and Reign can max out at 40, which is one more than the Thorns’ current total of 39. But the Royals and Reign play Wednesday night in Tacoma which means while either team can reach 40 points they cannot both reach it. So there is no mathematical scenario in which the Thorns can finish outside the top four. They are in.

The club realized this Sunday and tweeted it out. The NWSL did not. In fact, the NWSL did not tweet at all Sunday, one day after their regular-season champion was crowned and two other teams reached the playoffs. A day later, Megan Rapinoe led a parade of NWSL players honored at the FIFA Best awards. The league’s Twitter account mentioned this three times. There is no obvious mention of it on the website.

Last week, the league’s brand manager left abruptly after barely three months on the job. An official replacement for the communications manager position vacated in January has yet to be named even though indications were that interviews were completed weeks ago. The NWSL Championship is a month away and there are precious few details available including specifics of a naming rights deal with Budweiser. The Budweiser partnership was announced the morning of the World Cup final (at 2 a.m. EDT but let’s not worry about that right now). We are now twice as far from the announcement as we are close to the playoffs and no further details have been released. There was supposed to be a new initiative to name a Most Valuable Supporter, but again details have been nonexistent.

Meanwhile, there is talk of league expansion and an expectation that the relationship with U.S. Soccer is expected to evolve in a way that will give the league and its owners much more autonomy. Considering how the league has operated since the split from A + E earlier this year, are we to have confidence in their ability to navigate what lies ahead?

–The Reign will host the Royals Wednesday night, a week after the pitch at Cheney Stadium was deemed unplayable due to several days of rain in the leadup plus a Tacoma Defiance game the day before. This is the biggest game of the season with the winner taking a 3-point lead on the loser and earning the year-end tiebreaker with two games to play. A draw would favor the Royals who are +4 to the Reign on goal difference.

–Tuesday night’s Courage win over the Dash was one of the worst officiated games I have ever seen in the NWSL. The penalty call that won the game for the Courage was egregiously bad and the Dash should have had an earlier penalty when Jaelene Hinkle took down Sofia Huerta in the box. There was also the boot to the face that was not carded. But not to worry, Dash players were being waived back a few steps on defensive half throw-ins during stoppage time.

Let’s keep a little perspective though. The NFL weekend just before this game was also marred by a terrible officiating error in a game that was a rematch of the playoff game that may have had the worst NFL officiating blunder of all time. In other words, it happens in all leagues, in all sports. That doesn’t mean NWSL refereeing can’t and shouldn’t be way better. And Courage-Dash was one of the worst.

–It would have been nice if the Reign could have moved their start time up an hour on Wednesday and have ESPN come in for the big match instead of Spirit-Dash. Hopefully some day we’ll get there. Until then, at least the Spirit have a long shot prayer of making the playoffs if they can win this one.

–The notion that Megan Rapinoe was the best player in the world in 2019, or for any recent period possible covered by FIFA Best awards, is preposterous. But such is the nature of global soccer awards. And no one stumps for the sport both in and outside the bubble it exists in better than Megan Rapinoe.

–Katie Johnson has one more match to score a second goal and bring her scoring total equal to her red card total.

–For anyone who didn’t think Alyssa Naeher had to do enough to save Steph Houghton’s penalty in the World Cup semifinal, this one against Chloe Logarzo should suit you.

🛑Naeher Saves 🛑@AlyssaNaeher’s penalty kick stop is the @NWSL Save of the Week! pic.twitter.com/Gzf5wKvV5q