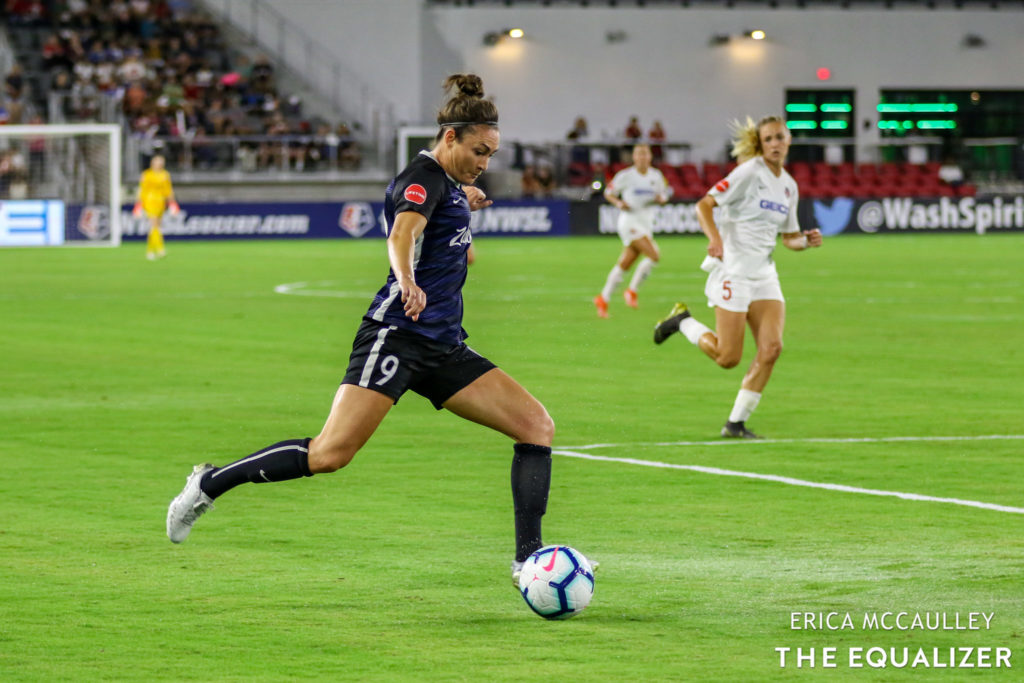 Jodie Taylor’s goal in the 87th minute lifted Reign FC to a 2-1 victory over Utah Royals FC on Wednesday in Tacoma, Washington, breaking the deadlock between the two teams in the standings and lifting Reign FC into the fourth and final National Women’s Soccer League playoff position with two games to play.

Taylor struck a right-footed volley past Utah goalkeeper Nicole Barnhart to deliver the crucial victory for Reign FC. Darian Jenkins’ header set up Taylor at the top of the box.

Jodie Taylor on the volley!

Reign FC now have 34 points; the Royals are stuck on 31 points.

Megan Rapinoe did not make the match-day roster after flying back from Milan, Italy, where on Monday she accepted her award as the best women’s player in the world. Wednesday’s match was originally supposed to take place last Wednesday, but it was rescheduled due to unplayable field conditions.

Bethany Balcer opened the scoring five minutes before halftime, beating Barnhart after being played in behind by Taylor. The goal was the fifth of the season for Balcer, an undrafted rookie who played at Spring Arbor University in the NAIA. Balcer was forced to leave the game due to apparent injury early in the second half.

Bethany Balcer finishes neatly to put the home side in front.

Christen Press had the best chance of the first half for Utah midway through. Her initial shot was saved by Reign goalkeeper Casey Murphy, and Press’ follow-up shot hit off the outside of the post.

Stengel equalized for the Royals in the 67th minute, pouncing on a loose ball which had dropped in the box.

Barnhart struggled in the first half, twice in two minutes nearly getting caught trying to play out of the back. She made one of the best saves of the season in the 73rd minute, denying Ifeoma Onumonu on a header from point-blank range.

It wasn’t enough, though, as Taylor struck late for the winner.

The Washington Spirit, according to number crunching, weren’t technically out of the NWSL playoff race before tonight’s match. However, a scoreless against the Houston Dash didn’t do the Spirit any favors in the ever-tight race for the last playoff spot. Instead, both teams picked up one point, but it wasn’t anywhere near what either side needed — or wanted.

Instead, there were chances for both teams, but none put away. The most head-scratching moment of the match came early, as Houston served up a defensive error on a platter for the Washington Spirit. However, third-year NWSL forward Ashley Hatch was unable to bury her shot past Jane Campbell.

Still level in Houston so far.

A look at an early save from @jane_campbell1, who has been doing her best to keep it things scoreless.

In the end, both goalkeepers — Campbell and Aubrey Bledsoe — kept a clean sheet.

Houston took a total of 10 shots at their home stadium, but only two registered on goal. Kristie Mewis and Rachel Daly took the shots on goal, but couldn’t get past Bledose. Meanwhile, the Spirit had a major eye-turning moment late in the match, as Mallory Pugh saw her shot saved by Campbell, as the goalkeeper used her legs.

With the final result, Washington sits in sixth place, while the Dash are one point behind in seventh place. Houston featured in their final home match of the season, and will head to Utah on Oct. 12 to finish out their season against the Royals. The Dash are off next week, but the Washington Spirit will host the recent NWSL Shield winning North Carolina Courage on Saturday.

😱@KristieMewie's shot is tipped off the crossbar by @AubreyBledsoe and we're still scoreless.