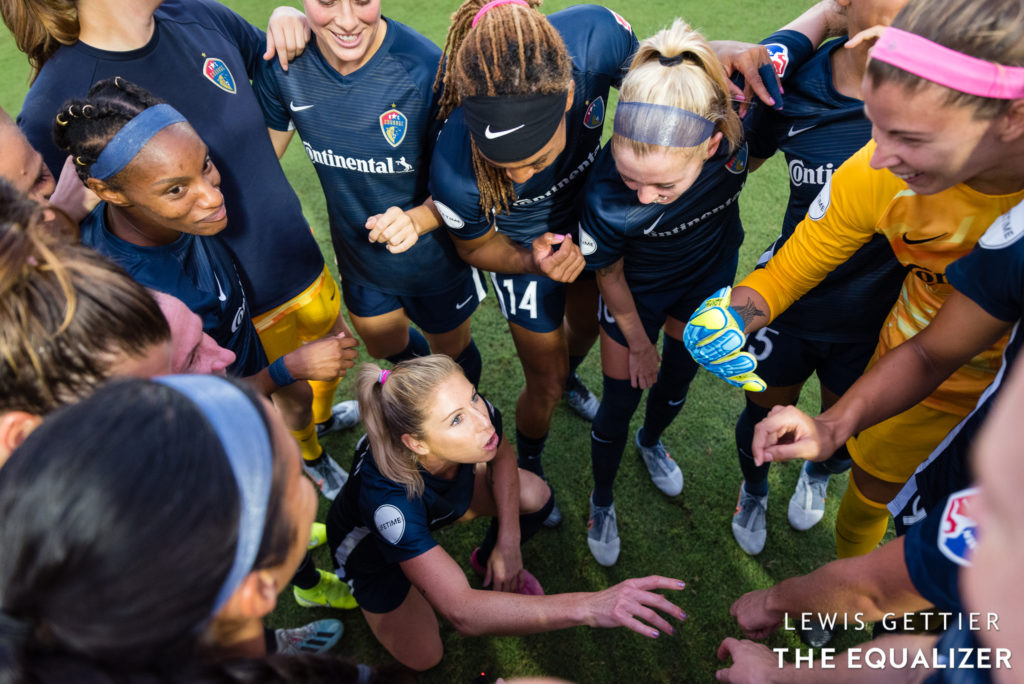 For the third-straight season, the North Carolina Courage have been named the top team, in terms of points, in the NWSL. The Courage have lifted up their third NWSL Shield, securing another three points in a 3-0 victory over the Utah Royals on Saturday night.

Sam Mewis scored the opening goal on a penalty kick in the first half. The penalty was called when Kristen Hamilton was fouled inside the penalty area by Becky Sauerbrunn. Mewis lined up the penalty for her second PK in the last three matches. Meanwhile, goals in the second half from Jaelene Hinkle — who sent a rocket shot from the flank past Nicole Barnhart, who saw the ball slip through her hands — and Debinha secured three points.

Cool as you like from the penalty spot. @sammymewy puts @TheNCCourage in front.

For North Carolina, it was another statement win. Meanwhile, for the Utah Royals, the match saw their chances of making the NWSL playoffs grow slim. They sit in fifth place behind Reign FC, who take up the fourth place slot. Reign FC is currently taking on Sky Blue FC at Cheney Stadium.

Christen Press and Vero Boquete were both questionable heading into the match. However, Boquete entered the competition in the 54th minute, replacing Katie Stengel. Press, on the other hand, entered the match in the 88th minute.

A ball played towards the net by @JaeHinkle_15 started as a cross, but ended as a goal.

North Carolina will look to head to their third-consecutive final. This year, the NWSL Championship will be held at the Courage’s home of WakeMed Soccer Park in Cary.

.@Debinha7 tacks on another goal for @TheNCCourage.

The Chicago Red Stars clinched a playoff berth for the fifth straight year with a 3-1 victory over the Washington Spirit on Saturday. Sam Kerr scored twice, giving her 18 goals on the season — a new NWSL record. Kerr held the previous record with 17 scored in 2017.

Kerr opened the scoring in the 9th minute with a gorgeous chip over Spirit goalkeeper Aubrey Bledsoe.

Fourteen minutes later, Kerr earned the assist as Yuki Nagasato roofed her shot to give the Red Stars a 2-0 lead.

Alyssa Naeher denied Chloe Logarzo on a penalty kick later in the half, and Kerr sealed the match with her second goal — and record-breaking 18th of the season — four minutes after halftime.

Record-breaking.@samkerr1 now has 18 goals this season for the most ever scored in an #NWSL season.

Mallory Pugh scored her first goal of the season in the 80th minute. The loss is a blow for Washington’s playoff hopes, though the Spirit are not yet mathematically eliminated.

Wednesday’s match against Reign FC and the Utah Royals just got a whole lot more interesting. The two teams are battling for the fourth and final spot in the NWSL playoffs. However, both sides dropped points at their respective home stadiums. While the Royals suffered a larger margin of defeat, Reign FC suffered greatly too. Reign FC gave up a second half goal to Sky Blue FC, falling 0-1.

However, it was celebration for Sky Blue FC. They’re out of playoff contention, so it’s all about playing for pride. Carli Lloyd bagged the lone, game-winning goal in the 77th minute. However, most of the work was put in by Nahomi Kawasumi, as the Japanese international slipped Lloyd a fantastic pass through two defenders. Lloyd managed to stay onside, scoring the goal over Casey Murphy.

.@CarliLloyd with a chance. No mistake.

The two sides will meet up Wednesday night in an all-important match. Meanwhile, Sky Blue FC will look to build off this win next Sunday, as they head back to Red Bull Arena to take on the last-place Orlando Pride at 11 a.m. EST.

It was a lot better than last time these two teams met, but in the end, it was another Thorns victory. Tobin Heath scored three minutes into the second half for the game’s only goal as Portland inched closer to clinching a playoff spot.

No more deadlock in Portland.

The Thorns out-shot the Dash 19-8 on the evening, but only three of Portland’s shots were on frame, making for a frustrating first half for the home side in front of over 21,000 fans.

Two months ago, the two teams met in Portland and the Thorns won 5-0 on a wild evening. On Saturday, it was Portland coming off an embarrassing 6-0 defeat at the hands of the Courage in Providence Park 10 days ago. Houston lost 1-0 in North Carolina on Tuesday.