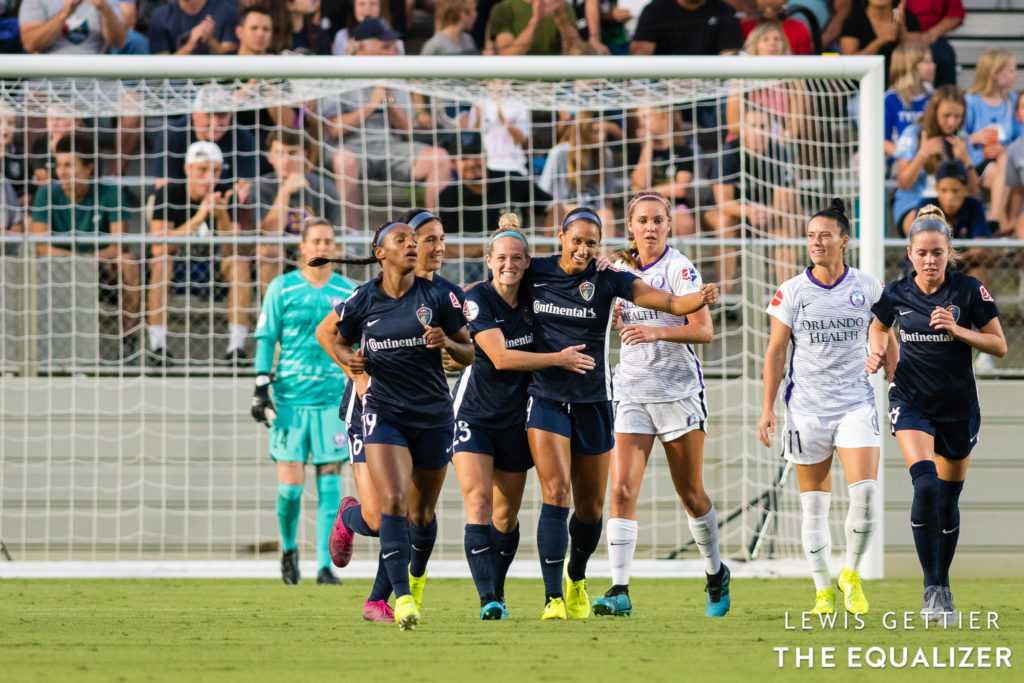 It was a night of celebration for the North Carolina Courage. This time last year, they already hoisted up the NWSL Supporter’s Shield. However, this year, it was a different celebration. The Courage have taken first place in the league with two back-to-back victories, where the Courage scored six goals. That’s 12 goals in their combined last two matches. It was also a celebration for Heather O’Reilly.

The midfielder is retiring at the end of the season, but has plenty of more action to feature in this season. O’Reilly scored one of the six goals for the Courage on Saturday night at Sahlen Stadium. O’Reilly’s goal came in the 85th minute. The Courage had six different goal scorers, but five only from their own team. In the 37th minute, Kristen Edmonds netted an own-goal past Ashlyn Harris.

The Pride did manage to pull one back. Rachel Hill came off the bench in the 68th minute, replacing Abby Elinsky. Hill scored the Pride’s lone goal in the 82nd minute. However, it wasn’t enough to must any sort of comeback for the Pride.

The Courage now extend their lead in the NWSL at first place. The Courage have a four-point lead over the Portland Thorns FC, as the Courage sit with 40 points on the NWSL table. Meanwhile, the Pride are much lower on the table, taking the last place spot with 14 points.

Meanwhile, the Courage also set a regular-season attendance record with 9,563 fans in attendance.

GOAL! It's @lynnraenie's world this week, and we're just living in it. 😯

Unlucky for the Pride, as the Courage find goal number 2️⃣ through an own goal.

Picture perfect finish to give @TheNCCourage their third of the night.

.@r_hill3 gets one back for the Pride from WAAAAAY downtown! 🚀

👏 H 👏 A 👏O 👏@HeatherOReilly marks her night with a special strike, and takes the bow she deserves. 🙌

Another 6️⃣ spot for @TheNCCourage.

From the first whistle, it was nearly all Reign, all the time. They controlled the tempo, keeping the Spirit pinned in their own defensive half and not allowing them any room to breathe. Rosie White nearly got the Reign off to a very early start when Beverly Yanez forced a turnover by Washington’s defense, and White nailed her shot off the crossbar.

However, against the run of play, the Spirit ended up drawing first blood. Mallory Pugh sent in a a cross from the left flank, where it met the head of Ashley Hatch, sending goalkeeper Casey Murphy the wrong way and finding the back of the net.

🚀⚽️ @ash_hatch33 with the emphatic header off a brilliant @MalPugh cross!

The Reign answered a mere five minutes later, when Bethany Balcer picked up a loose ball after Aubrey Bledsoe punched away a corner kick. The rookie evaded a few Spirit players before firing home.

Things are heating up in the nation's capital. ♨️

Bethany Balcer with a 👌 finish for @ReignFC, and this game is level at 1️⃣ goal apiece.

After halftime, the tables began to turn despite Megan Rapinoe coming on for the Reign. This time, it was the Spirit who pushed hard and had the majority of the attack, forcing Murphy into an excellent save in the 61st minute after Pugh and Cheyna Matthews created an opportunity on a breakaway. Meanwhile, the Reign shouted for a penalty after Rapinoe went down in the box in the 82nd minute.

The Spirit’s hard work paid off right as regular time was coming to an end. Chloe Logarzo picked up a low cross from Hatch that flew across the face of goal, and the Aussie was able to take her time with an excellent finish.

LOGARZO! 😲@CLogarzo puts the Spirit ahead as we head into 7️⃣ minutes of stoppage!

Once again, the Reign answered back right away. In stoppage time, Ifeoma Onumonu ran onto a through ball from Taylor, cleverly evaded Amy Harrison, and pulled the Reign back level.

The Spirit (7-7-5) return to sixth place and travel to Chicago next Saturday. The Reign (8-5-7) remain in fifth place, hosting the Utah Royals next Wednesday.