The Lowdown: The Royals are right where they want to be — almost 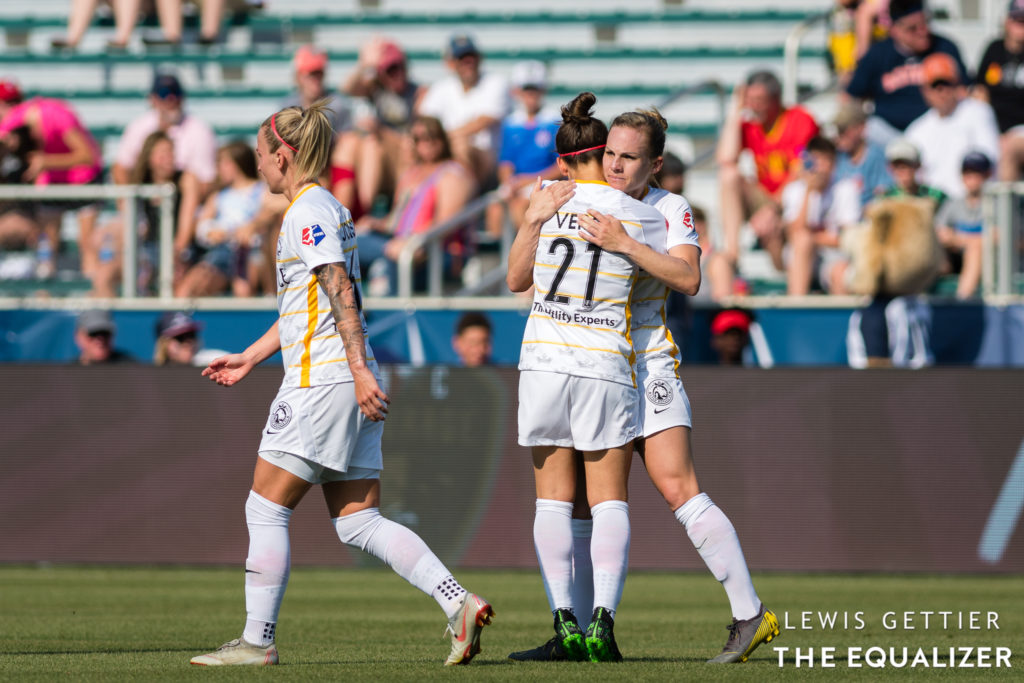 A month ago, the Utah Royals’ season was hanging by a thread. They were in Tacoma, playing Reign FC. The match was tied at the half but the Reign were on the front foot. Head coach Laura Harvey’s side had recently snapped a six-game winless streak by clubbing Sky Blue FC, but there were troubling trends in form.

A loss to the Reign — a team they had yet to beat since joining the league in 2018 — would have dropped them 8 points out of a playoff spot with one-third of the season to play.

“We had a tough July,” Utah forward Amy Rodriguez conceded.

But on that afternoon in Tacoma, the Royals turned things around after halftime.

Lo’eau LaBonta and Rodriguez scored second half goals and the Royals posted a 3-1 win on the road. Instead of being eight points back, they were two. More important than the points, though — at least for the long-haul — was how the Royals completely turned the tide of that match. They exploited a weakness in the Reign’s shape and took the space between the back line and the midfield. They outworked the Reign. They left Tacoma with important points and important confidence.

“Honestly, the race is so tight that we look at every game as very important,” Rodriguez said earlier this week.

Rodriguez has eight goals, the most on a Royals team that has struggled to score for long stretches of the season. The defense, however, has been sensational. The Royals have not conceded a goal in three matches since beating the Reign. They did settle for a 0-0 draw in Washington after a long weather delay, but wins over the Orlando Pride and Portland Thorns have them up to fourth place with give games remaining.

“I think that we feel okay,” Rodriguez said, refusing to rest on a run of strong results with important games still left to play. “Things are looking good, but I don’t know if we feel very confident in our playoff berth just because the race is so tight. We all have our heads down and we’re still working hard because we know there is a very important job to do.”

Like most of the National Women’s Soccer League‘s clubs, the Royals roster has been a bit all over the place due to the World Cup. The key losses in Utah were Christen Press and Becky Sauerbrunn. Press was acquired midway through the 2018 season and had yet to show enough consistency. Sauerbrunn is the every-woman rock in central defense. Other players missed time to head to France, but Press and Sauerbrunn were the gone the longest and missed the most (Kelley O’Hara, for one, played limited minutes before the World Cup and has been injured since).

Sauerbrunn has been about the most consistent athlete on the planet for the better part of the decade, so her near seamless transition back from the World Cup was no surprise. Press has operated on the other end of the continuum. Her play since returning from a tournament that saw her score the opening goal of the semifinal in a spot start, has turned the Royals’ fortunes.

“Christen adds a wonderful contribution to the team,” Rodriguez said. “I enjoy playing with her. I find that a lot of defenders can definitely get distracted by her, which leaves her a little more open and vice versa. I feel like we’re a very dynamic front.”

Rodriguez acknowledged that it took some time for her and Press to gel as teammates, even though they played together on the 2015 World Cup winning squad. “We try to the best of our ability to score for our team and that’s what she and I hope to do in the coming weeks.”

The most recent, important result for the Royals came last Friday in front of the home fans at Rio Tinto Stadium. A scheduling oddity saw the Royals with a weekend off (with nine teams, someone always has to sit out a weekend) followed by a FIFA window. That meant they were hosting the Thorns having not played a match for 16 days.

20 thoughts from NWSL Week 20: The duopoly isn’t dead, but this is a heck of a race

The Royals are on their way to Houston, where they will again play Friday night, against the Dash. It is the start of an intense, eight-day stretch after which we will know much more about the final fate of the club’s 2019 season. Next Wednesday is another trip to Tacoma. Three days after that is a home game against defending league champions North Carolina Courage. A visit to Chicago to face the Red Stars and then — after an oddly situated FIFA break — a home game against the Dash will close out the regular season.

The Royals are in the fourth and final playoff spot but lead the Reign by only a point. They also trail the Red Stars by a point for third and the Courage by two points for second. Even the Thorns, out in front of the league, are only five points away and have one less game remaining. (The Courage have more game remaining than the Royals.)

“We just need to follow the game plans and give it all of our efforts,” Rodriguez said.

–Sam Kerr’s two goals on the weekend put her season total at 15. That is the third straight season that Kerr has hit the 15-goal plateau. Only two other players have ever reached 15 even once. Kim Little knocked in 16 for the Reign in 2014 and a year later Crystal Dunn scored 15 for the Spirit. Kerr is almost certain to win a 3rd straight golden boot.

–For all the guessing and speculating about how Julie Ertz and Tierna Davidson would be used in Chicago, I doubt many people had them debuting as a center back pairing in September. They helped the Red Stars earn a shutout but probably were not tested enough by the Dash to get a good enough read on how it worked. I’m personally in favor of the move though as it allowed Danielle Colaprico to play in midfield and Sarah Gorden to line up on the outside where she can better utilize her speed.

–If you’re wondering what the Darian Jenkings hype train was about when she broke her leg as a highly regarded college senior, her second goal against Orlando on Saturday night served as a reminder.

–Some unfortunate timing Wednesday night with ESPNews showing the Pride and Red Stars while Thorns-Courage will happen at 10:30 p.m. EDT on the Yahoo stream. Thorns-Courage is not exactly for the Shield, but the winner will certainly have the inside track heading into the closing weeks. Fingers crossed for an even number of teams next season to avoid similar scenarios.

–Sky Blue report that their home finale, September 29 against the Pride is expected to sell out by the end of the week.

–If Jane Campbell were your backup goalkeeper, would you save your last substitution card to get her into a match that might be decided by penalties?

–Megan Rapinoe is back. And that can only be a good thing.

–Communication continues to be an issue for the NWSL. After tweets appeared, and then disappeared, about allegations of racial slurs from the stands directed at Adrianna Franch last Friday in Utah, the league finally responded…on Sunday. Part of the response referenced a league policy. But when pressed by multiple journalists the league was either unable or unwilling to produce this policy. I would argue that it would be okay if the league did not have a specific policy for handling this yet. And then instead of an empty statement that made them look reactive and incompetent, they could have acknowledged that they were supporting the Royals investigation into the matter and that they would work with the clubs to have a standard policy in place by the end of the season.

–Amy Rodriguez on the incident with Adrianna Franch: “I haven’t been fully updated on all the components of the situation but as far as I know there is absolutely no room for any sort of hatred no matter what it’s regarding. I apologize that it happened at my stadium.”