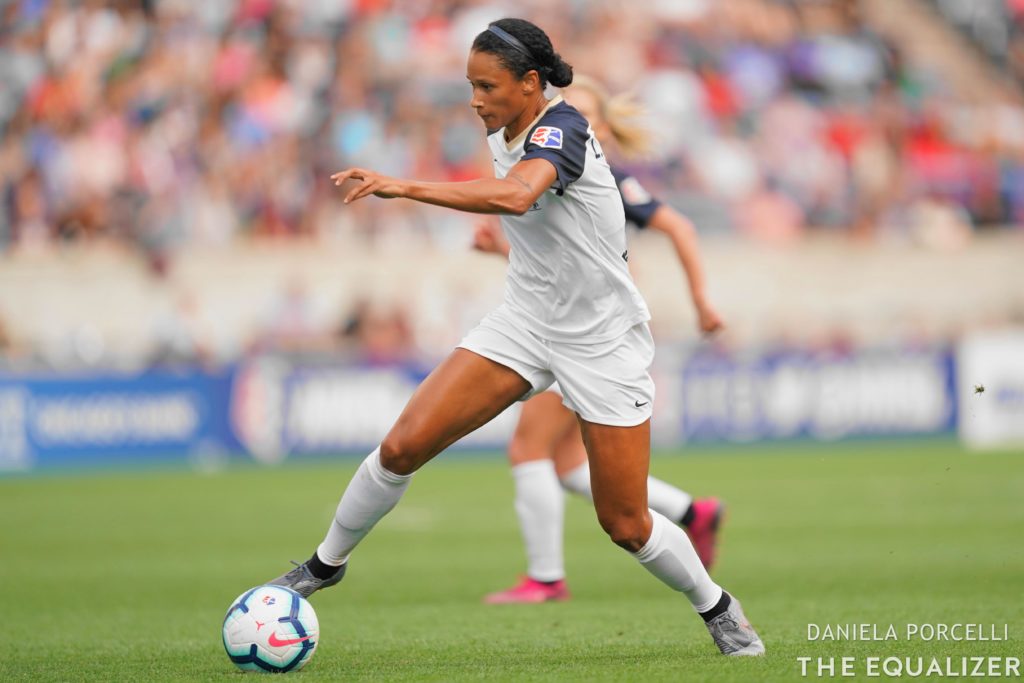 Lynn Williams scored a hat trick as the North Carolina Courage throttled the Portland Thorns, 6-0 on Wednesday at Providence Park. With the win, the Courage leapfrogged the Thorns to move into first place in the National Women’s Soccer League. North Carolina still has two games in hand on Portland.

Debinha opened the scoring for the Courage in the 15th minute, finishing a beautiful sequence after North Carolina won the ball back high on the field.

Pure attacking ⚽️@Debinha7 finishes off the move to put the visitors in front.

On 🔥@TheNCCourage can't be stopped right now and it's @lynnraenie who nets her second.

Williams nearly completed the hat trick in the first half before Lindsey Horan’s header went wide just before halftime. A rattled Thorns side went to the break down 3-0.

It was more of the same in the second half as Dunn made it 4-0 shortly before Williams completed the hat trick, following a through ball from Debinha, who dribbled from her own half with little resistance.

Tip your 🎩@lynnraenie nabs her third and gives @TheNCCourage a high 🖐 for the night.

Kristen Hamilton, who entered the match in the second half, finished the scoring in the 89th minute to make the 6-0 result the largest margin of victory in league history, surpassing previous five-goal results.

Casey Short might not be known for scoring goals, say, like her teammate Sam Kerr. However, Short played the hero role on Wednesday night down in the Sunshine State. Short scored the game-winning goal with seconds left in Chicago’s must-win match against the Orlando Pride. Her goal gave the Red Stars a 1-0 victory in an incredibly tight NWSL playoff race.

Short’s goal was assisted by her Australian international teammate, Kerr. For the defender, the goal is monumental, as Chicago is looking to make another consecutive run at the playoffs.

However, the goal didn’t come without plenty of action preceding it. Ashlyn Harris had a stellar match in goal, despite giving up the late tally. Harris finished the match with six saves, including three saves against Kerr. The Pride even went up a person on the Red Stars, as Katie Johnson was ejected from the match after being shown a second yellow card in the 64th minute.

The Red Stars have now leaped up to second place, but that could change in a few hours. If the North Carolina Courage defeat the Portland Thorns, they will jump up to the first place spot, bumping down the Thorns to second place and Chicago back to third.

Meanwhile, Orlando continues to sit at the bottom of the match. However, there was reason for the Pride to smile tonight. Toni Pressley made an appearance in the ESPNews broadcast booth, updating fans on her health since her diagnosis of breast cancer and surgery.

Pressley said she is working on returning to the field, as she’s been cleared for practice.

We admire you, @Toni_Deion!
And we can't wait to you back on the pitch!#ORLvCHI | 0-0 | #NWSL pic.twitter.com/fdcTljbMjP

Sam Kerr was through on goal, but advantage @Ashlyn_Harris. 🚫