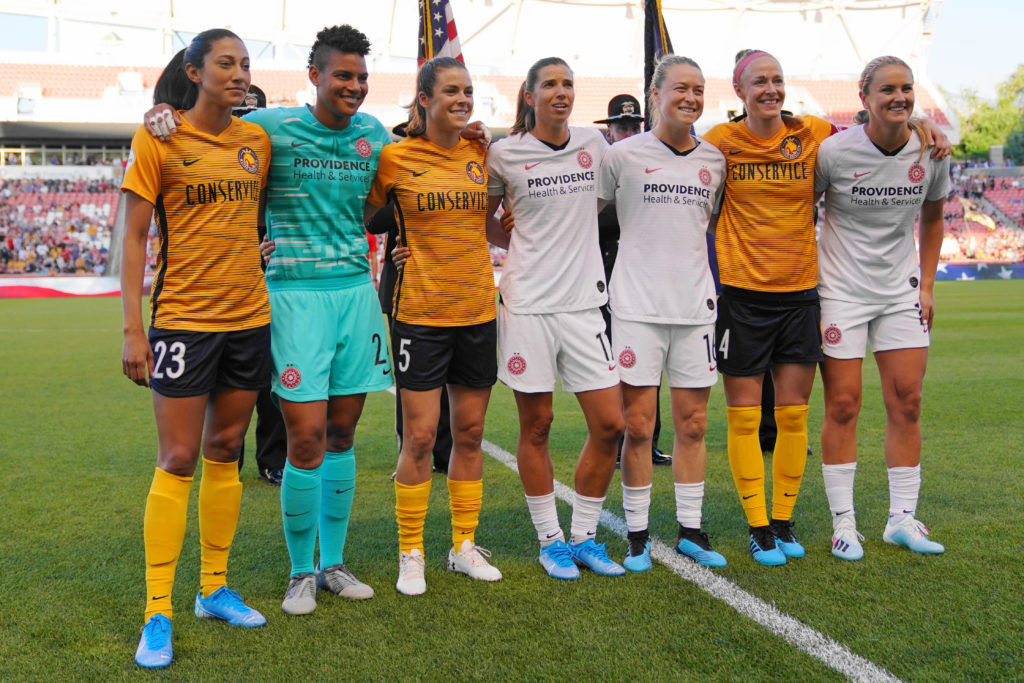 On Sunday, the National Women’s Soccer League made its first public statement about an alleged incident of fan racism on Friday night in Utah, condemning the racist comments made towards Portland Thorns goalkeeper Adrianna Franch.

We have been made aware of an incident at a game this weekend where racist comments were made toward one of our players.Racism in any form is unacceptable & NWSL does not tolerate this behavior on the field nor in the stands.Per league policy, appropriate actions will be taken… pic.twitter.com/ZTdRt3XrX5

The league’s statement followed announcements by both the Utah Royals and Portland on Saturday that an investigation was being conducted. The league announcement also did not include the word “allegation” — as the previous team statements had — and seemed to indicate that league officials have concluded the incident did occur.

The league statement, however, also referred to a league policy about such incidents — a policy that has yet to be shared and that some suspect does not yet exist. An email from The Equalizer to the league on Sunday requesting that policy has yet to be returned. Several other outlets have also requested the policy and not heard back.

The NWSL Players Association also issued a statement on Sunday.

Franch herself also acknowledged in a Twitter post on Sunday afternoon that the language had been used in Utah. She added that it was not the first time she has been subjected to racist abuse.

The situation surrounding our game friday night is not a NEW issue, nor is it a first for me. RACISM is NOT okay in any form!! We as a HUMAN RACE can be better and should be better. We as a SPORT can help show the way. pic.twitter.com/SAoPwIuaLA

Reaction from the league and Franch followed earlier condemnations from Christen Press and Becky Sauerbrunn, who both play for the Royals and are Franch’s teammates on the United States women’s national team.

On Sunday, other current and former teammates of Franch began to react as well.

“It’s terrible,” said Chicago Red Stars forward Sam Kerr, a former teammate of Franch from their days with the Western New York Flash. “It’s sad. It affects everyone in the league. You hear about it on social media, but you never think it will come to your league. I’m sad for her. There’s no place for that in our league. It’s disgusting to be fair.”

“There’s absolutely no excuse for that,” explained Chicago’s Julie Ertz, one of Franch’s teammates for the United States. “That’s uncalled for. It was terrible to hear and something that should never happen.”

“It’s really disappointing,” added Tierna Davidson, another one of Franch’s teammates on the U.S. national team, which won the 2019 World Cup in July. “Adrianna’s one of my close friends. We need to support everybody in this league because every player is important. She’s a great person, a great athlete. It’s disappointing to hear that fans are kind of stooping to that level. Hopefully, they can get that cleaned up.”

“It’s extremely disappointing that that’s still going on, but the way she’s handled it with grace is amazing,” said Casey Short, who has played with Franch at the club level in Norway and on the U.S. squad. “I love that everyone stepped up and the league stepped up and made a statement about it as well.”

Others spoke out on social media, including Meghan Klingenberg, Jess McDonald, Mark Parsons, and Nicole Barnhart—to name a few.

Disappointed and disgusted. Racism and hate of any form has no place in the world. ‘We as a SPORT can help show the way’ Love you AD https://t.co/0MZWeTqtxj

Racism will never be tolerated in this league. I will always stand with my teammates to face down hate and intolerance.

We are a league of women, of every race, nationality, filled with queer spectrum players who are regularly belittled & underpaid for our toils. https://t.co/htSFtB2hRB

NWSL Sunday: Red Stars put on a show in 3-0 victory over Houston
20 thoughts from NWSL Week 20: The duopoly isn’t dead, but this is a heck of a race