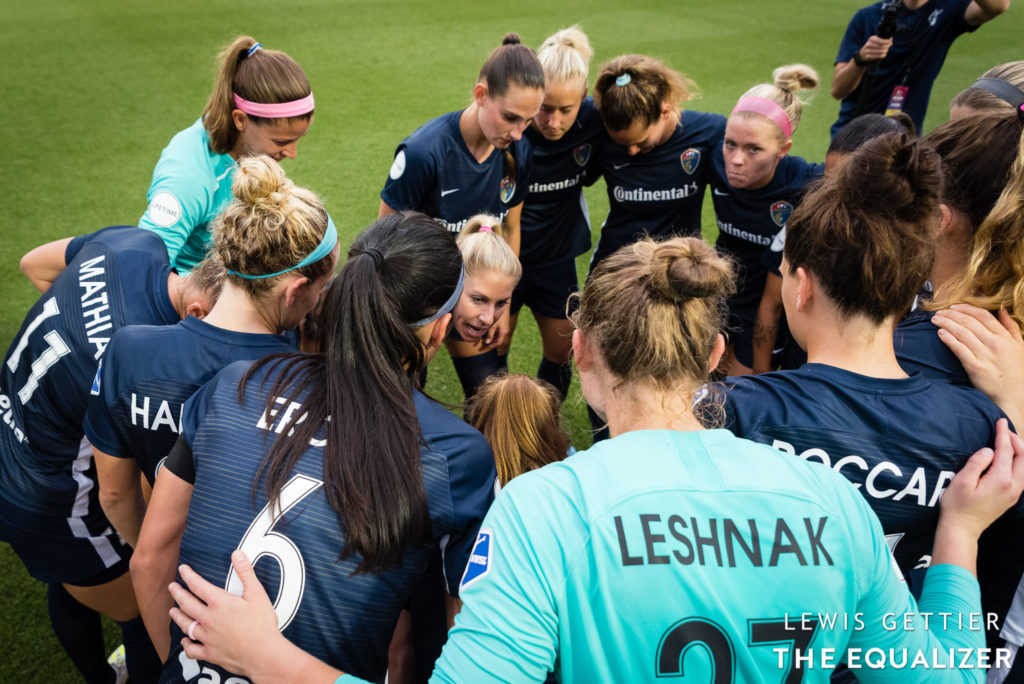 Sky Blue FC was riding a high heading into their contest against the North Carolina Courage on Saturday. However, the team’s three-game unbeaten streak has come to an end. The North Carolina Courage, who are fighting to get back to first place in the league, scored two goals to earn three points in a 1-2 final. The Courage are now in second place with the win, just one point behind the Portland Thorns FC, who fell to the Royals last night.

The lead went to North Carolina early, however nobody in a Courage uniform scored the goal. Instead, an own goal from Erica Skroski went behind Canadian goalkeeper Kailen Sheridan.

An own goal has the visitors in front early.

It didn’t take long for the home side to equalizer. Abby Dahlkemper was called for a foul inside the penalty area against Paige Monaghan. U.S. Women’s National Team veteran Carli Lloyd set up the penalty and slot it past another Canadian goalkeeper, Stephanie Labbé in the 13th minute.

.@CarliLloyd, cool as you like from the spot. All tied in New Jersey.

However, the game-winner came from Lloyd’s teammate on the USWNT. Crystal Dunn found herself unmarked in the box and after some weaving by Kristen Hamilton, the ball found Dunn. She slot it past Sheridan for the game-winning tally.

North Carolina has a short turnaround this week, as they will face off with the Thorns on Wednesday night. Portland will be without Emily Sonnett, who received a red card last night. The winner will serve as the leader in the NWSL. However, should there be a draw, the teams will split the points.

👃 for the 🥅 @crysdunn_19 slots the ball home from close range to put @TheNCCourage in front.

The NWSL is the gift that keeps on giving, and last night’s match against Reign FC and the Orlando Pride had everything. There were three goals within the first 20 minutes — all for the Reign — and a massive hour-and-a-half long weather delay. However, one of the more monumental moments came as the sun was still down early Sunday morning. Megan Rapinoe made her debut for the Reign this season in the first weekend action of September.

Rapinoe has either been with the national team or injured, barring her from club play. However, she made a statement during the FIFA Women’s World Cup, scoring six goals, winning the Golden Boot and Ball, all while helping her team lift a fourth World Cup trophy.

.@ReignFC wasting no time. @darian_jenks puts the home side in front already.

Rapinoe didn’t find the back of the net on Saturday night — or should we say Sunday morning. However, it was Darian Jenkins who found the back of Ashlyn Harris’ net, twice. Her first goal came within three minutes, as she picked up a defensive error and slotted it home. Meanwhile, just nine minutes later, Jenkins found the net again. This time, Bethany Balcer picked up on the errant pass from Harris to defender Shelina Zadorsky. Jenkins dribbled around defenders and shot at a tough angle to put the home team up by two.

The final goal for Reign FC came from veteran Beverly Yanez, who was almost unmarked inside the box. Rosie White assisted the goal in the 17th minute. However, shortly after Yanez’ goal, the Reign FC momentum was stopped by lightning in the area. The teams didn’t come out to play until 12:30 p.m. EST.

Reign FC didn’t find the back of the net again in the match. However, Orlando found a consolation goal in the 79th minute. In only her second start of the season, Brazilian international Camila slot home a penalty kick, erasing what could’ve been a clean sheet for Casey Murphy. Reign defender Megan Oyster committed the foul inside the penalty area against Danica Evans.

With the victory, Reign FC jumps over Chicago to take fourth place in the NWSL. The standings are tight and teams are hunting and searching for those four coveted playoff spots. Meanwhile, teams like Chicago and the Washington Spirit are still alive and very much in the race. Chicago plays today, looking to get three points over Houston.

This time it's @beverlygoebel that gets on the scoresheet.

Meanwhile, the Pride are at the bottom of the table, sitting with 14 points.

Camila gets a goal back for @ORLPride after slotting home from the penalty spot.