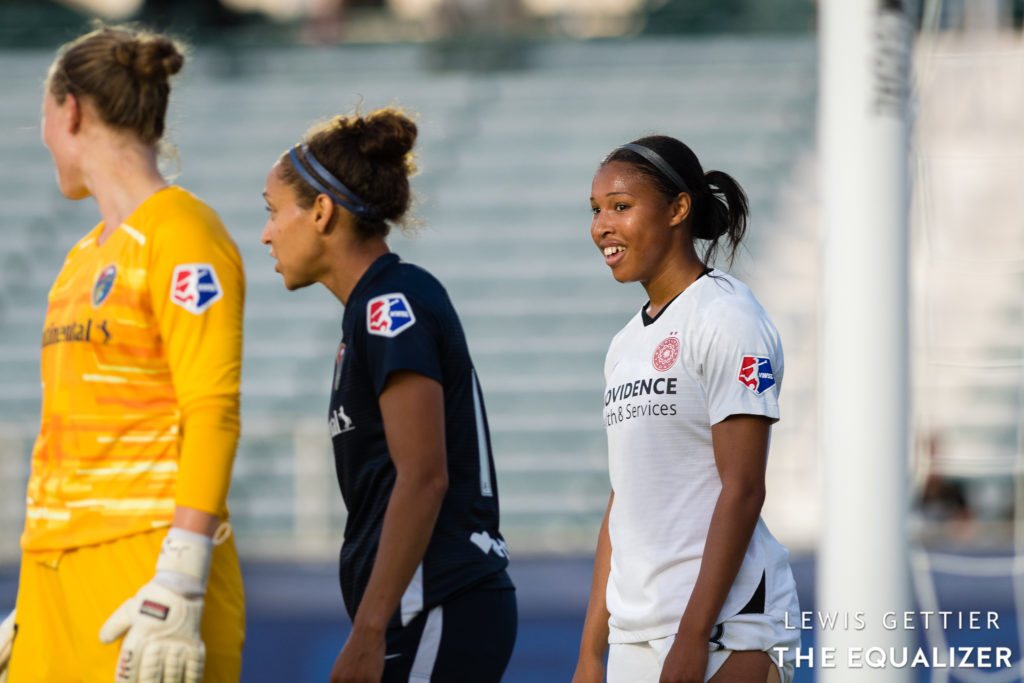 It is September now, and while there is still a decent chunk of time left in the National Women’s Soccer League season — especially compared to 2013 and 2014, when the final was contested in August — it is still crunch time as far as battles for playoff position and certain elements of pride.

Here’s a look at each team’s MVP so far, plus one person who needs to emerge or step up in the final weeks of the season.

MVP, Midge Purce: With an assist to (or from) Simone Charley. Purce played the best soccer of her career to keep the Thorns rolling during the World Cup. And she has kept it up to a large extent. The former Boston Breakers first-round pick is finally starting to play like one. When players as quick as her put in the sort of effort she does, they are difficult to deal with.

Key for the finish, Lindsey Horan: Horan has played enough this year for club and country that it’s easy to forget she has been a touch less than 100 percent healthy. Either way, the box-to-box terror that took down the MVP trophy a year ago has not been there much in 2019. If she shows up, the Thorns will be difficult to beat. Honorable mention here to both Emilys in the back — Menges and Sonnett — as the Thorns have shown some occasional leakiness late in matches.

Outlook: Rosy. The Thorns are closing in on a fourth top-two finish in as many seasons under Mark Parsons. They play in front of the most fans in the league and could give them a fourth straight semifinal to cheer on.

MVP, Kristen Hamilton: Hamilton was rewarded for her strong season with her maiden U.S. national team cap against Portugal on Tuesday night. No she’s not the Courage’s best player but she has been their most important, carrying the scoring load while so many regulars were out on World Cup duty and Lynn Williams toggled between hurt and unable to finish. Hamilton won’t be the MVP of the league, but if there were an award for most important player during the World Cup, she would be at the least a finalist.

Key for the finish, Crystal Dunn: If Dunn finds the form she had in April, before joining the U.S., the Courage are clearly the team to beat. Jumping from club to country and changing positions, in entirely different systems and philosophies all year, is not as easy as Dunn makes it look. One final switch to Paul Riley-ball for her will make the Courage favorites to repeat.

Outlook: Stable. This team has not touched the form or consistency of a year ago and still they’re right in it to grab the Shield for the third straight season, with another home semifinal position looking very promising. Sometimes the encore is harder to pull off than the original virtuoso performance.

MVP, Sam Kerr: The easiest choice and the likely league MVP to this point. Kerr looks headed to her third Golden Boot in a row as the central force in the Red Stars’ offense. Beyond that, as Sam Kerr goes so go the Red Stars.

Key for the finish, Danielle Colaprico: It’s possible the perpetually underrated Colaprico has gained more in terms of appreciation during this season when she has fought her body and been far less effective than at any other point in her NWSL career. If she can get healthy and on the field, her presence could help ease some pressure on Kerr and the rest of the side and help push the Red Stars to legitimate contender status.

Outlook: Muddled. At their best, the Red Stars can hang with anyone. At their worst, they can be maddeningly frustrating to watch and spectacularly inept at scoring goals. And it seems they’re on the yo-yo, thriving when it seems they’re falling apart only to stumble once they reach contender status. The schedule is favorable the rest of the way, but as noted, that can be part of the problem.

MVP, Christen Press: A smiling Christen Press is a dangerous Christen Press. And ever since the World Cup, Press has been smiling her way to goals and those goals have produced results for the Royals. At 30, Press has never been better and the dividends of her acquisition appear to finally be paying off.

Key for the finish, Desiree Scott: The Destroyer is still a viable midfielder, and she can still be an important player in the Royals’ midfield. And if she can finish with a flourish and help keep opposing attackers off the back line, the Royals may just be real title contenders. Honorable mention here to Kelley O’Hara if she can get back on the pitch.

Outlook: At halftime in Tacoma three weeks ago, it looked like the Royals were on their heels and about to tumble out of realistic playoff contention. They won that game, then beat the Orlando Pride and played the Washington Spirit scoreless on short rest following a long delay. Their schedule is no cakewalk and they’ll play Friday off an absurd 17-day break, but considering they looked like also-rans through the middle of the season, things are looking bright in Utah.

MVP, Lauren Barnes: The 2016 NWSL Defender of the Year is having a bounce-back season, leading a back line that has held things together as injuries have ravaged the attacking corps. As the personnel has changed, head coach Vlatko Andonovski has employed a more defensive approach to things and Barnes has been vital to that working out as often as it has.

Key for the finish, Jodie Taylor: If Megan Rapinoe plays at all this season, she’ll be dangerous and could push the Reign into the playoffs. But even if she doesn’t, Jodie Taylor has had a poor season and needs to find her production. If she does, the Reign have a chance even without Rapinoe and the many others who have been injured over the course of the season.

Outlook: Alive. If you look at their injury report each week (at least when the league gets around to posting it), no one would blame the Reign if they were in the bottom third of the table. But they stole two results against the Thorns and have rarely capitulated defensively. It’s September and the games matter. Not all of the teams can say that.

MVP, Andi Sullivan: She’s subtle, but she’s good. After a drab rookie season, Sullivan has found her footing as a sophomore and has kept a very young side stable.

Key for the finish, Rose Lavelle: If Lavelle gets healthy and plays well, she can change the entire way the Spirit play. For as much of a mark that Lavelle made on the World Cup, she has been more famous for being on the injury report than doing much on the field in the league.

Outlook: Futuristic. I won’t say it’s irrelevant for the Spirit to make the playoffs, but whether they do or don’t, they have turned the club in the right direction after a couple of lost seasons.

MVP, Rachel Daly: In another blasé season in the Lone Star State, Daly has been the most influential Dash player, even goading Marta into being sent off for the second year in a row.

Key for the finish, Sofia Huerta: This was supposed to be Huerta’s big chance to own the league while many of the top scorers were at the World Cup. It didn’t happen. That doesn’t mean Huerta can’t finish strong and help the Dash pick up some points down the stretch. But it does seem like another uncertain offseason for her lies ahead.

Outlook: Mundane. The sixth season without a playoff berth out of six — barring a late surge — will feel different from the other five, but at the end of the day it rings the same. And with only two wins at BBVA Stadium, it’s another year of under-performing in front of a small but loyal set of home fans that have yet to taste a playoff appearance.

MVP, Kailen Sheridan: The third-year goalkeeper has improved her game tremendously this season and has kept Sky Blue afloat on more than one occasion. Sheridan has always been an excellent shot-stopper but her reading of the game and organizational skills are much improved.

Key for the finish, Julie James Doyle: Sky Blue won’t make the playoffs, but James Doyle has quietly emerged as one of the league’s top rookies and another solid month should establish her as part of the core moving on to 2020 and the new coaching regime.

Outlook: Pulsating. As in, there is a pulse. Yes the on-field performance needs to be better, but in order for that to matter, the club needs to catch up to its peers. Under the guidance of Alyse LaHue, some steps in the right direction have been taken. Removing the interim tag from her general manager title, which the club announced on Tuesday, was an easy move.

MVP, Marta: It has been an almost entirely lost season in Orlando, but Marta is still the MVP of the squad. Even when she’s not scoring, she still works as hard as anyone even at this advanced stage of her career.

Key for the finish, Rachel Hill: Take your pick of the younger players here. Hill is a proven scorer in Australia. The Pride need to know at what level she can be a regular contributor in the NWSL.

Outlook: Bleak. No roster in the NWSL is in need of a bigger overhaul than this one. There are issues on every line and not all that much in the pipeline. The 2020 draft will be important.

— The NWSL postponed the lone match scheduled for the FIFA window due to threats from Hurricane Dorian. And they did it in a timely manner. The Pride match against the Spirit was bumped to the next window, October 5.

— Kristen Hamilton earned her first cap for the U.S. on Tuesday night. If she never earns another one, she will be one of the great, this-league-made-me stories to emerge from the first decade of the NWSL. To say Hamilton was under the radar coming out of University of Denver would be a compliment to the radar. Hamliton was completely unknown. Now she has a national team appearance and a share of the NWSL record for goals in a game, with four (Sam Kerr).

— Sky Blue also unveiled Marcia McDermott as technical advisor. McDermott was the original coach of the Carolina Courage in the WUSA and led than team to the 2002 Founders Cup. That made her the first woman to lead a championship team in the history of North American professional sports.