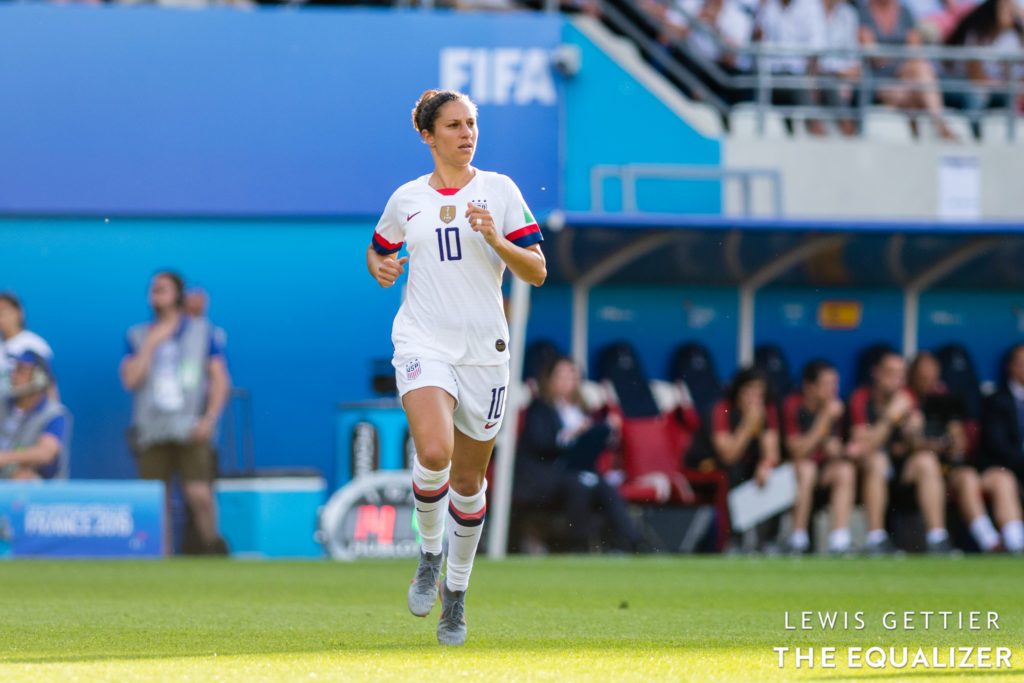 PHILADELPHIA – A celebration tour can only last so long for Carli Lloyd before she’s looking for her next challenge. This potential change just happened to be serendipitous.

Last week, Lloyd attended a joint NFL practice between the Philadelphia Eagles and Baltimore Ravens as a guest. There, she kicked a few field goals, gradually moving back before nailing her kick from 55 yards. Video of the kick went viral, and the rest escalated quickly. Lloyd and her longtime trainer, James Galanis, said Lloyd received multiple offers from NFL teams to join them for preseason.

Thank you to the @Eagles for having me out! Thanks to @JustinTuck @jake_elliott22 @MayorRandyBrown for the good time and tips! 🏈 🎯 #55yd pic.twitter.com/owZ16f46Th

Lloyd said on Wednesday that she has declined those for the time being – she’s in Philadelphia with the U.S. women’s national team for their World Cup victory-tour match, and says she’s focused on that right now – but that she is seriously considering the possibility for the future.

“It’s gone from just having fun kicking to, ‘Will she play in the NFL?’ At first, I was just laughing about it but the more that I spoke with my husband and he’s all for it – and my friends and family, they are really encouraging me to potentially take up this opportunity,” Lloyd said in the player tunnel of Lincoln Financial Field, home of the NFL’s Philadelphia Eagles. The U.S. will host Portugal there on Thursday in front of an expected crowd of at least 46,000, which will break the program’s attendance record for a standalone friendly.

It’s an incredible turn of events for Lloyd, considering that she and her teammates are less than two months removed from winning their second straight World Cup. She was the Olympic gold-medal game hero in 2008 and 2012 and cemented her claim to fame in the 2015 World Cup final, when she scored a hat trick – including an iconic goal from midfield, another 50-plus-yard effort of a different variety.

Speaking to media on Wednesday, Lloyd sounded serious about the opportunity in front of her. And she has proven time and again through the years that she has the type of singular focus – the mental and physical fortitude – to rise above in big moments. It’s difficult to avoid the seemingly cliché when describing Lloyd, because of how she has continued to deliver such dramatic heroics at the most important times.

“I think 100 percent she could do it, no doubt in my mind,” said outgoing U.S. head coach Jill Ellis. “Do it technically and do it mentally. Obviously, stepping on that field with all those big guys and all – but I think she’s got the steel internally and I think she’s got the range in her leg. I remember when I first came on the scene and I saw Carli Lloyd strike a ball on goal, and I was like, ‘holy crap, that’s the hardest I’ve ever seen a woman hit a ball,’ so she certainly has the velocity and the technique. I think it’s very cool; I think it would be great.

The challenge of transitioning from a world-class soccer player to an NFL kicker – at the age of 37, and with the context that she would be the first woman to suit up in the NFL – would be an easy one to dismiss. It’s a PR play, some have said; it’s a lot harder in a game setting, with huge men running at her – and she won’t be able to take five steps – others have pointed out.

Lloyd acknowledges all that. And anyone who even remotely knows Lloyd understands that any sort of negative chatter fuels her. Those words – the very idea that someone thinks she can’t do something – are reasons alone to go do it. Lloyd also knows that even making an attempt at playing professional football would be a huge moment for women in a continued global battle for equality.

“There’s got to be a first for everything and I’ve got an opportunity and I know that mentally, you need to have thick skin,” she said. “You’ve got to be mentally tough, mentally strong. I invite pressure; I love pressure. I’ve got all that kind of ticked off and now it’s just a matter of knowing if I can do it, and then go from there.”

Lloyd said she will start practicing with that other kind of football next week, after the United States’ pair of World Cup victory tour games against Portugal. She wants to try kicking with a two-step run-up, the standard in the fast-paced NFL. “If I can do that from a pretty good distance, then I would feel a lot more comfortable,” she said. The come the pads, the helmets, the 300-pound men, and everything else that would come with the media circus which would follow.

“You can’t really touch a kicker, but it happens,” Lloyd said. “I don’t know – there is that part of it, and there’s challenges as far as, you know, being with all males and [the] locker room. There’s a whole range of things, and I get that. I’m not afraid to step up in front of the whole world and do it. I’ve always been like that, since a little girl. I’ve never cared about going up against boys or what not. But yeah, 300 pounds coming at me, I’d probably try to give my best shot, but I don’t know – I might be in the hospital if I do that. But, we’ll see. First, I’ve got to get out on the field and actually attempt to do it, and then we’ll go from there.”

For now, Lloyd and her teammates have four more games of celebrating their World Cup triumph, a second straight and fourth overall for the United States. By the time the Americans wrap up their calendar year in November, they should have a new head coach. It’s a time of transition for U.S. Soccer, with Ellis – who was at the helm for each of the last two World Cup triumphs – stepping down, ex-World Cup winner Kate Markgraf, who is in Philadelphia with the team, starting up in the newly-created general manager role, and a new, yet-unnamed coach coming in (not to mention a CEO change for U.S. Soccer).

That leaves some questions to be answered for Lloyd, too. She is 37 and was a reserve for the U.S. at the 2019 World Cup, rotating into a forward role to bring energy in the second half of matches. Olympic rosters only allow for 18 players, five fewer than World Cup rosters. An incoming coach might also look to bring in new, young call-ups, which makes the future especially unclear for Lloyd at the moment.

She also has five more games to play this season with her National Women’s Soccer League team, Sky Blue FC.

Then, perhaps, it’s on to the next challenge.