What’s the Iron Front, and what does it have to do with the NWSL? 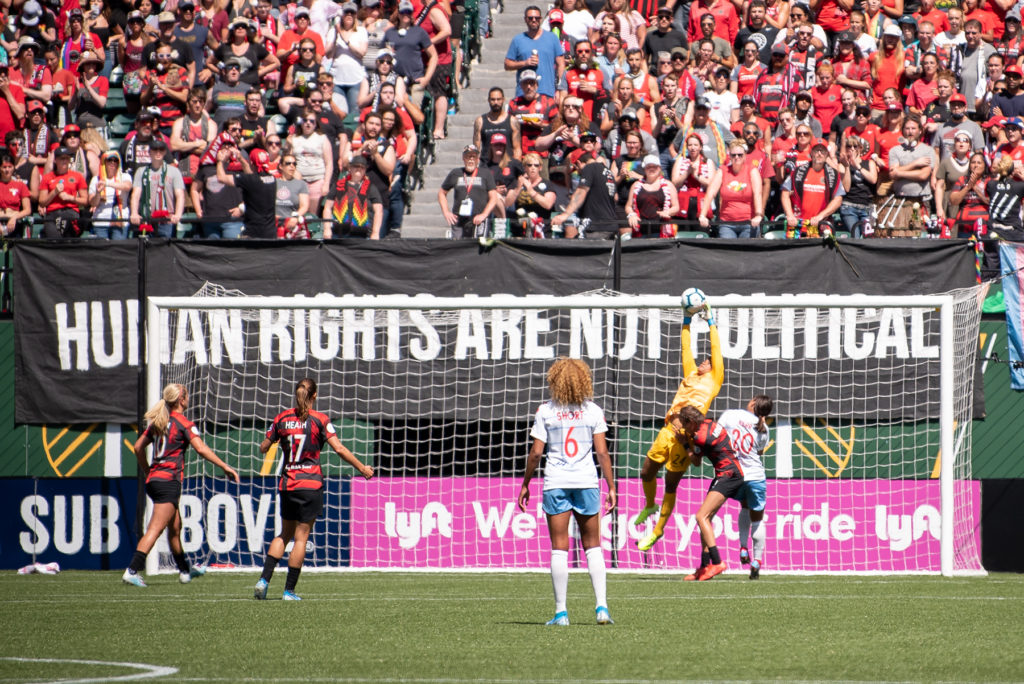 The banners and flags displayed by the Rose City Riveters at Portland Thorns games are typically a space for fans to celebrate their favorite players and show off their own creativity. But on Sunday, in a 3-0 victory over the Chicago Red Stars, the scene in Providence Park’s north end was different. One long, black banner read “SILENCE = COMPLICITY”. Another bore the Elie Wiesel quote, “We must take sides. Neutrality favors the oppressor, never the victim.” The signature Rose City Riveters banner, usually hung front and center, was conspicuously absent.

The displays were in protest of a policy at Providence Park banning the display of the Iron Front symbol, the emblem of a World War II-era political and paramilitary group in Germany that opposed the rise of totalitarianism, which has since been adopted by the modern-day antifa movement in the United States.

At the beginning of the 2019 MLS season, the league introduced a new fan code of conduct prohibiting “political” language or displays at games, including the Iron Front symbol. The Portland Timbers front office decided to apply the restriction to Thorns games (as well as to the club’s USL side), despite the fact that the National Women’s Soccer League has no equivalent policy. In a statement issued last week, the club explains that decision was made to avoid confusing stadium staff.

“I think people are mad at the front office for enforcing rules on the NWSL team that there don’t seem to be any reason for,” said Russell Mayhew, a Thorns fan, after Sunday’s game. “We just want to make that point heard.”

It’s a controversy that has attracted attention from supporters groups throughout MLS and the NWSL. Sky Blue FC fans displayed an Iron Front banner at their game against Reign FC at Red Bull Arena on August 18. Chicago Local 134, the Red Stars’ supporters group, is selling Iron Front-inspired merch.

If all this seems like much ado over a symbol that many people wouldn’t even recognize, some context is in order.

First, the MLS fan code of conduct has resulted in some ugly incidents. A Seattle Sounders fan tweeted that he was ejected from an LA Galaxy game for displaying a banner reading “anti-fascist, anti-racist, always Seattle” — and that an MLS official later told him, “we want both sides to be able to come and watch games without politics.” A few weeks before that, the Sounders front office issued a statement equating antifa, a left-wing movement, with several hard-right groups (they later apologized for the statement).

The controversy ultimately revolves around which issues and stances are considered “political,” which inherently becomes arbitrary at some point. The rainbow flags that are a common sight in many American soccer stadiums have (rightfully) not come under attack, despite the fact that the struggle for LGBT rights has been and remains a political one. Nor, obviously, has the American flag, ubiquitous in sports, which is political by the most literal definition that exists.

It’s worth noting here that the Timbers and Thorns front office has specifically applied the MLS policy only to the Iron Front symbol — and they are allowing fans to wear the Iron Front symbol on clothing — something they pointed out in last week’s letter. This is where the issue touches a Portland-specific nerve.

Since the 2016 election, Portland has become a locus of attention for right-wing groups across the country who see the city as the ultimate bastion of liberalism. Several times a year, conservative groups, including white nationalist groups like the Proud Boys, show up in town to hold demonstrations; they are inevitably met by counter-protesters, including members of Rose City Antifa. At times, these dueling demonstrations have involved violence.

The significance of these clashes is the symbolism: right-wing groups, amplified by conservative media like Fox News, label antifa as violent thugs, claiming the streets of Portland are overrun with militant leftists, while labeling themselves as patriotic Americans. Organizers called the most recent demonstration, which largely fizzled, the “End to Domestic Terrorism” rally, demanding that antifa be labeled a domestic terrorist organization, and themselves threatening violence in the lead-up to the event.

What does this have to do with the Thorns? Effectively, to Portland soccer fans, it looks as if the front office is accepting the rhetoric used by right-wing and white supremacist groups around antifa, in a moment where the city itself has become a target for out-of-town activists seeking to shape the national discourse. And while it’s true that members of antifa have committed violent acts at these demonstrations, Portland has a much bloodier history of white nationalist violence, including the murder of two people on a light-rail train in 2017 by a man harassing two young women of color.

So on Sunday, the Riveters voiced their disapproval, with the banners and with chants that included the words “f*ck the Nazis!” — and by flaunting the actual ban, hanging an Iron Front banner in plain view. It echoed the protest a few days prior at a Timbers game, where the supporters group stayed silent for the first 33 minutes of the game, then, when they started their familiar chants again, revealed several large Iron Front flags. None of those flags were taken away.

It remains to be seen whether the club or MLS will take any disciplinary action against fans, and on game day, the club had no official comment about whether the ban was being enforced.

Notably, Thorns captain Christine Sinclair showed up to the stadium on Sunday in a t-shirt bearing the Iron Front symbol. (When asked about it after the game, she was reticent to talk about it, simply saying, “I just agree with our fans, that’s all.”)

That gesture was not lost on Thorns fans. “I feel, especially as our captain, it was important,” said Lisa Shimabukuro. “It was so touching to feel like our captain is on our side, because she’s such a leader in the Thorns. That was really great.”

Sports themselves have no ideological value, and have long been used as a platform for political speech of all stripes. What the controversy in Portland shows is just how vital and all-consuming the fight for those platforms can be to a fan group that feels a strong sense of ownership over a team.

The Equalizer Podcast, Episode 74: Unsurprising Results
What is the NWSL’s concussion protocol?