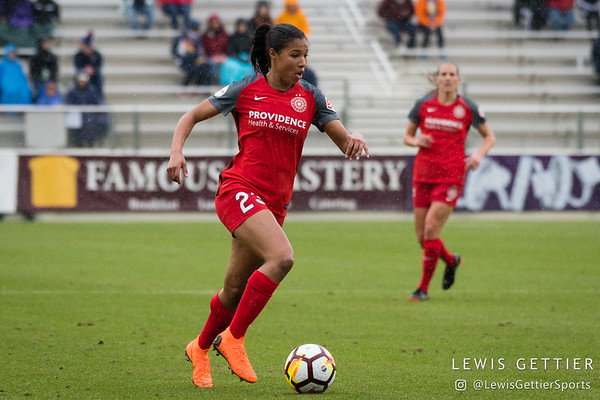 Christine Sinclair got things started, and Midge Purce proved just how much she likes scoring on Chicago as the Red Stars’ losing streak extended to three in their loss at Portland.

For the first ten minutes, the Red Stars looked to be in control. They set the tempo and had some promising build-up play early on, even if it didn’t lead to any goals just yet.

That changed in the 12th minute, when a quick slipped pass from Tobin Heath to Sinclair gave the captain room to work. She dribbled past Katie Naughton and finished past an oncoming Alyssa Naeher to open scoring.

How @ThornsFC opened the scoring.

After that, the tune changed. Portland controlled the game, allowing Chicago possession in their own half but quickly getting numbers back when they crossed the midfield line. Adrianna Franch had to come up big a few times, even at the expense of taking out her own teammates, and Sam Kerr sent one just over the crossbar, but the chances for the Red Stars tended to be rushed, while the Thorns were more patient.

That patience paid off in the 24th minute. Naeher blocked a ball from Hayley Raso, and it fell right to Purce, who had made an early run and held it, unmarked inside the box. There was no time for Naeher to recover to stop her header, and the lead was doubled.

.@100Purcent gave the @ThornsFC a two-goal lead with an unmarked header after great buildup play.

The second half began much like the first – the Red Stars had the build-up, the Thorns had the goal. In the 56th minute, Sinclair pinged a shot off the crossbar, and Purce beat Tierna Davidson to tap in the rebound.

Here's how she scored the second.

The remainder of the game slowed down and became rather choppy. Several players received yellow cards, and play had to be stopped numerous times as players went down on the pitch with injuries, although nothing was serious, leading to an eventual six minutes of stoppage time.

Julie Ertz was pushed high up the field in an effort to unlock things for the Red Stars, but they weren’t clinical enough in the final third to make a difference.