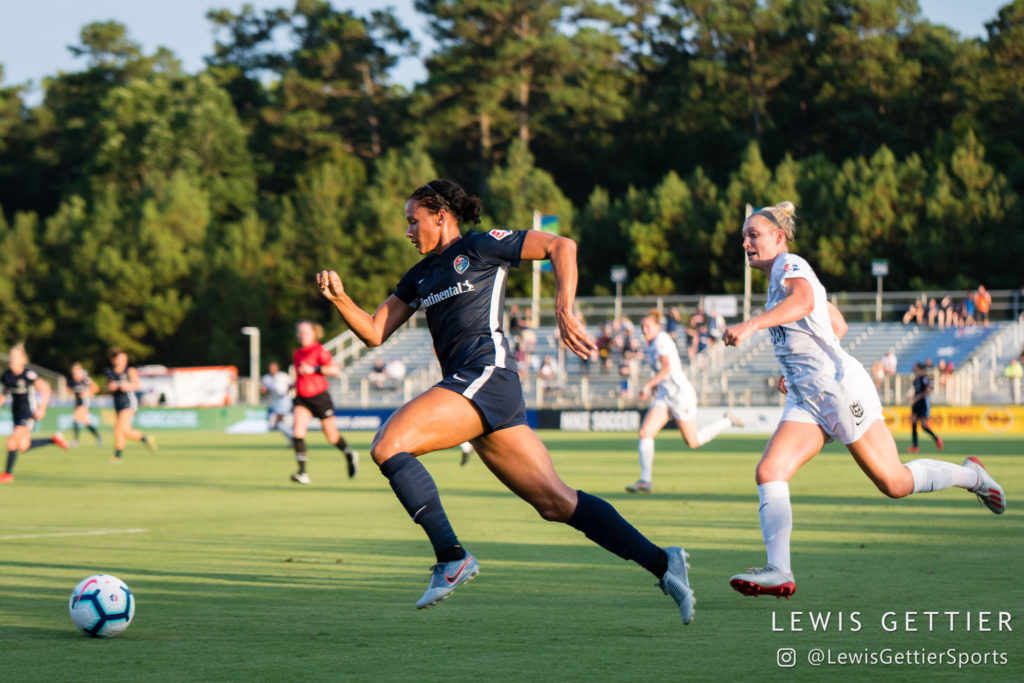 For a team that has so many attacking players, the North Carolina Courage were left relatively quiet by Reign FC tonight. However, the breakthrough came from Lynn Williams in the 82nd minute, finding the back of Casey Murphy’s net off an assist from Crystal Dunn. The 1-0 victory provided three points at home for the Courage, who now move up to second place in the league’s standings.

Jessica McDonald, who entered the match for Kristen Hamilton in the 60th minute, got the play started with a few nifty moves to steer away Reign’s defense. North Carolina kept the Reign defense busy, as they took a total of 26 shots on Saturday night, with seven registering on goal.

Murphy was able to deny Merritt Mathias, Debinha, Dunn, McDonald and one other attempt from Williams. Meanwhile, Stephanie Labbé was only forced to make one save against Bethany Balcer tallying the lone shot on goal, out of nine total shots.

With the victory, the Courage have moved up to the second place slot in the league. They are currently right behind the Portland Thorns, who sit in first place and who will face off with the Chicago Red Stars tomorrow. Meanwhile, the Reign are fighting in a tight NWSL playoff race, and currently sit at fifth place.

A team-record crowd of 19,471 — an announced sellout — showed up at Audi Field in Washington, D.C., and although they did not see Mallory Pugh, Rose Lavelle or Alex Morgan, they did witness some spectacular play from Washington Spirit goalkeeper Aubrey Bledsoe, among others. Bledsoe dazzled as the Spirit defeated the Orlando Pride, 2-1 to keep in the thick of the NWSL playoff race.

A goalkeeping gaffe on the other end led to the opening goal. Pride goalkeeper Ashlyn Harris inexplicably tried to dribbled out of pressure in front of her own net, and Crystal Thomas slid in to steal the ball and shoot the ball into the net, all in one motion.

Crystal Thomas pounces on a mistake by Ashlyn Harris to put @WashSpirit in front.

Marta equalized for the Pride in the 31st minute, tapping in a cross from Rachel Hill to score her seventh goal in seven career games against the Spirit.

But it was Ashley Hatch who would score the eventual game-winner in the 59th minute, when she headed home a cross from Tori Huster.

Washington and Orlando traded opportunities throughout the half, including Cheyna Matthews hitting the post for the Spirit, and Marta smashing the crossbar for the Pride, just a minute apart. Harris came up with a couple of big saves, and it was Bledsoe whose heroics preserved the desperately needed three points for the Spirit.

In the 71st minute, Bledsoe denied Hill from six yards out. She made another incredible save on Andi Sullivan in stoppage time.

Carli Lloyd made a triumphant return back to BBVA Stadium on Saturday night, wrapping up the evening’s action. Lloyd’s two goals helped propel Sky Blue FC to a 2-1 victory, notching three points and moving out of last place in the NWSL. It’s been a rollercoaster season this year for Sky Blue, with clear changes happening to improve the squad. Denise Reddy has been out and a group of assistant and goalkeeper coaches have been leading Sky Blue to admirable and surprising results.

Sky Blue has fought with the Orlando Pride in staying out of last place. Right now, the New Jersey club is in eighth place and riding a three-match unbeaten streak. They upset Chicago to kick it off and drew with Reign FC at Red Bull Arena.

Lloyd’s goals came in the first half. Her first tally in the 26th minute was assisted by Jen Hoy. Meanwhile, Costa Rican international Raquel Rodriguez tallied the assist on Lloyd’s second goal, which came in the 41st minute.

Houston had a last-ditch effort from Kealia Ohai, with her shot going behind Kailen Sheridan in second-half stoppage time. Sheridan’s clean sheet was erased, as she went against fellow young goalkeeper Jane Campbell.

.@CarliLloyd is able to just tap it in at the back post after @SkyBlueFC's quick restart.

.@KealiaOhai with a great finish to pull a goal back for @HoustonDash.