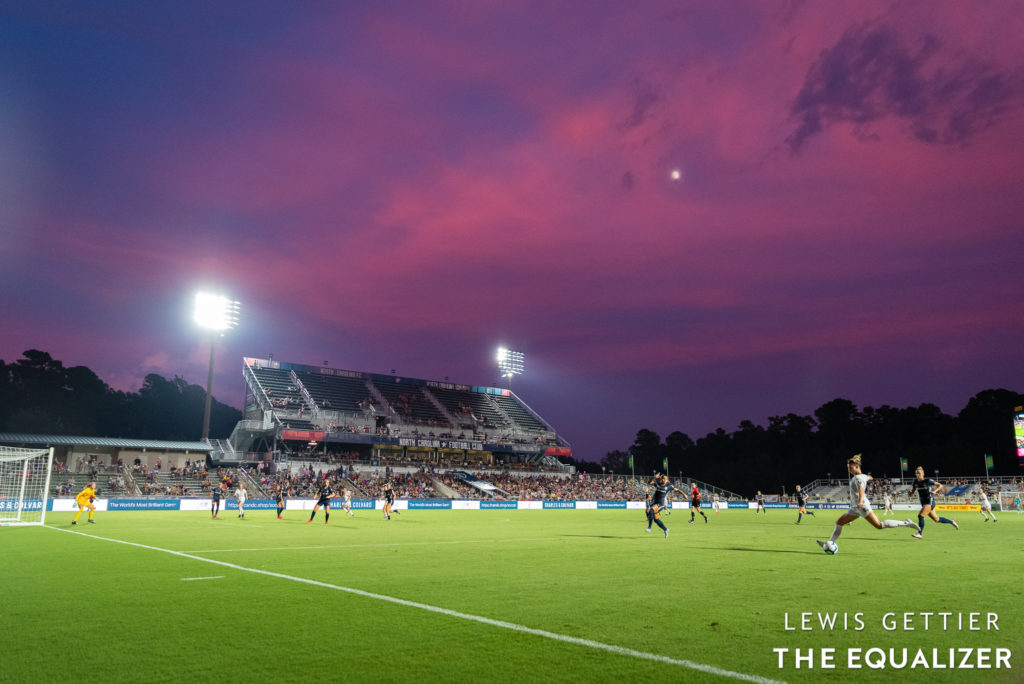 Expansion! Everyone loves the word, and ‘tis the season for talking about it more often. We’re creeping up on September, which beckons the usual reminder that if something’s going to get done for next year, it sure better get done soon.

Portland Thorns and Timbers owner Merritt Paulson dropped some significant news in an open forum with supporters on Wednesday, saying that there are two teams committed to the National Women’s Soccer League for next season, and a third team aiming to join the league in 2021.

“We’ve had multiple expansion groups in Portland for the last couple games,” said Paulson, who is a chief player in the NWSL’s small expansion committee. “We’ve got commitments from teams for 2020 and for 2021. We’re going to stabilize this league and we’re going to grow it.”

UPDATE (8/23; 4 p.m. ET): A reliable source confirms that the three ownership groups Paulson is talking about are Louisville City FC, Sacramento Republic FC and Atlanta United FC. Timelines, however, are not yet set in stone. A likely scenario would see the NWSL add one team in 2020 to reach an 10 total teams, and then add two teams in 2021 to go to 12 teams. Sacramento looks like the team most ready to join the NWSL next year, as of right now. Expansion talks are inherently fluid and change often. Two new teams would be possible if a current team — Sky Blue FC for example — did not carry on in its current form.

Sacramento Republic currently plays at the 11,500-seat Papa Murphy’s Park on the grounds of Cal Expo, an open-air stadium loosely comparable to WakeMed Soccer Park in Cary, N.C., where the North Carolina Courage play. Sacramento has been part of the MLS expansion conversation for five years, but remains in second-tier USL and without a confirmed future place in MLS. St. Louis was recently awarded MLS’ 28th franchise; MLS has said it will expand to 30 teams. Sacramento has been something of a perennial ‘leading candidate’ for MLS expansion and would check the box for a team that “will be an MLS team,” according to Paulson.

“I think we’re going to have one more next year — that’s my hope,” Paulson said when asked about when the NWSL would add another West Coast team.

The Equalizer reported earlier this month that Louisville City FC, a USL Championship team which will open a new, 10,000-seat stadium next year, had moved to the front the pack as one of the most serious candidates for expansion. The Athletic reported last week that Louisville City will likely join the NWSL in 2020. Current NWSL president Amanda Duffy was president of the club before joining the NWSL in late 2016.

So, that would match the USL team which Paulson references; Louisville is a USL team and will remain one. Louisville co-owner Mike Mountjoy told the Courier Journal last week that there have been discussions with the NWSL, but having a women’s team in 2020 would be a “stretch” given how much the club is doing to get its stadium done.

Los Angeles FC would be the team that jumps to mind on the West Coast, but Mia Hamm has been clear that the second-year MLS franchise is not ready to jump into starting another team right now. “It’s got to be the right time,” Hamm told me in Paris, the day the World Cup kicked off. LAFC to the NWSL continues to be painted as a when-not-if scenario, but the when isn’t going to be next year. That’s been said from inside the NWSL and from Hamm, a co-owner of LAFC and U.S. women’s national team legend.

Defending MLS champions Atlanta United FC have been a success story since entering the league in 2017, and average crowds of over 50,000 people indicate a wider soccer market to be had. Atlanta United president Darren Eales said last month “we haven’t considered a women’s team – yet,” before saying it’s on their radar and “it probably will be sooner rather than later.”

Paulson sounded less certain about the 2021 team, saying “we’ve got another team in the Southeast who I think have committed to 2021, that would be a really, really significant, big-name addition.”

Other groups who have expressed interest in NWSL expansion are a group based in Hartford, Conn., and an ongoing public expression of interest from FC Barcelona.

Lyon president Jean-Michel Aulas has been vocal about wanting an American franchise and wanting it in Miami, though much like FC Barcelona’s continued posturing, that seems to be more about publicity than sincere investment in the league.

I asked Aulas directly about this, and the involvement of retired NBA star Tony Parker, in Paris in June.

“Above all, we absolutely hope to develop a franchise in the U.S. with the name OL in women’s football,” Aulas said. “Because it corresponds… with our philosophy of international development. There are two continents where OL wants to develop. First, the U.S., second, China. In China we started a commercial structure, and we have an e-sports team that are champions, by the way, in China. It’s not in France, but it’s still the case!

“And we also have the desire to develop our presence in the American territory and to be able to negotiate that, we are in an agreement with a basketball team owned by Tony Parker. We are in the process of building a partnership that will probably, but it’s not totally signed off on yet, permit Tony Parker to help us with the development of the American franchise. In addition, I have some personal activities in Miami, so if we could find out a way to have a franchise near Miami, that would be magnificent.”

Two weeks after that chat with Aulas, the deal was finalized for Lyon to take a minority stake in local basketball club Asvel; Parker is the president and majority owner of Asvel.

Miami Dolphins owner Stephen Ross — who also owns Relevant Sports — has spoken about women’s soccer through the promotion of the Women’s International Champions Cup, which just completed its second year of competition. Relevant owns and operates the ICC men’s and women’s tournaments. Relevent also tried to sue U.S. Soccer this year before discontinuing that pursuit.

Aulas reiterated those intentions in a L’Equipe interview published on Wednesday, in which he also said that Lyon is recruiting U.S. players for the new calendar year. Two of those negotiations are “advanced,” he said. Both Barcelona and Lyon remain a long way from actually obtaining NWSL franchises.

The Vancouver Whitecaps are out of the running and have been clear about that. Their unresolved scandal surrounding improper handling of alleged inappropriate behavior involving a coach of their previous semi-professional women’s team doesn’t help any case for a future team. Also, in the moment, it appears to be the source of organizational turmoil. Bob Lenarduzzi, who was president, has been reassigned and that role has been eliminated.

Another question is this: If the NWSL is adds two teams next year, is a current team not expected back? The league played 2018 and 2019 with nine teams, after the collapse of the Boston Breakers in early 2018, and the odd number has made for scheduling issues with awkward bye weeks. Ten is seen as a great number; 11 just prolongs the issue, but if there is promise of another team in 2021, that would only be for another year. MLS has certainly dealt with (and continues to juggle) the awkwardness of the total number of teams constantly changing.

Sky Blue FC re-enters the conversation at this point. The team-record crowd of 9,415 at Red Bull Arena on Sunday was a needed victory for a stagnant franchise playing catch-up. However, the team still needs a venue for 2020 – and it needs one soon.

It looks likely that the NWSL will finally expand, without contraction, for the first time since the Orlando Pride joined the league in late 2015 (Utah Royals FC replaced FC Kansas City in late 2017, and the Breakers folded a few months later). The question is, who will it be?