NWSL Wednesday: Chicago drops second in a row against Orlando 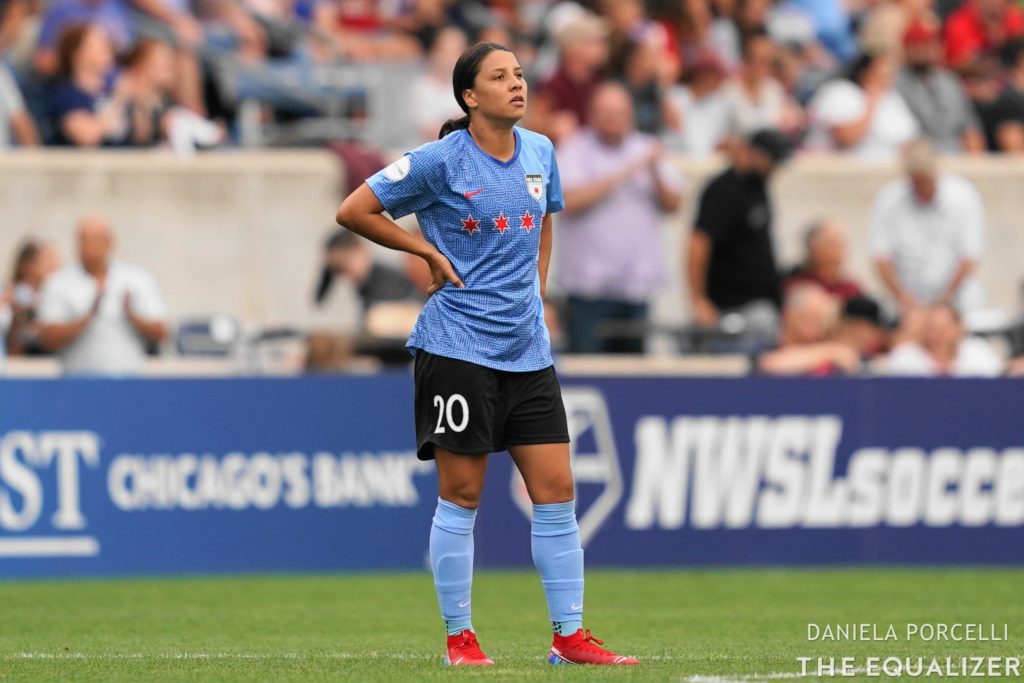 This hasn’t been the week the Chicago Red Stars were aiming for. Just a week ago, the Red Stars hit the road to face off with Sky Blue FC, but dropped their potential history-making contest. This week, against the last place Orlando Pride, Chicago dropped three points at Toyota Stadium in what’s becoming a tight race for the top spot in the league — and even a playoff spot. The Red Stars gave up two goals to fall to the Pride, 1-2.

Chicago did muster up a late goal from defender Tierna Davidson in the second half. However, it wasn’t enough to propel any major comeback, as there wasn’t enough time and enough chances.

The pass by Chioma Ubogagu. The finish by @r_hill3. One pretty goal for @ORLPride.

However, Orlando had the chances on Wednesday night. Rachel Hill found the back of the net first, 33rd minute. It was a game of sharing for the Pride, as Chioma Ubogagu assisted the goal. Hill later returned the favor, assisting Ubogagu’s game-winning tally in the 61st minute.

.@r_hill3 returns the favor to @ChiAlreadyKnow as @ORLPride now have a two-goal lead.

The win potentially came at a cost though. About six minutes into the match, Alex Morgan — who made her return to the starting lineup in this match — collided heads with either Sarah Gorden or Julie Ertz. Initially, a stretcher was called for Morgan, but she got up and made her way to the locker room on her own power. Morgan was subbed off for Ubogagu. Meanwhile, another important note is that Alanna Kennedy received a red card in the 90th minute, marking her as suspended for Orlando’s next match. However, they will receive Marta back from a two-game suspension.

With the victory, Orlando jumps over Sky Blue FC to get out of last place. Meanwhile, the Red Stars still continue to remain in their second place spot behind the Portland Thorns, but will have to see if there’s any change during the weekend.

First a cross bar from @smccaskill_21's effort and then a shot from distance by @tierna_davidson finds the back of the net to pull a goal back for @chiredstarsPR.

The Washington Spirit and Utah Royals FC played to a scoreless draw that was interrupted by an early weather delay at the Maryland SoccerPlex. The teams had played only 99 seconds before the lightning siren went off, triggering a delay that lasted nearly 90 minutes.

When play resumed, Ashley Hatch had a golden opportunity in the 4th minute but Royals keeper Nicole Barnhart was up to the challenge and tipped the shot over the bar. The Spirit also had a golden opportunity early in the second half but were again thwarted by Barnhart. On that one, a corner kick was cleared to the top of the penalty area where Meggie Dougherty Howard sent a swerving shot targeted for the upper 90 before Barnhart got there.

Meggie Dougherty Howard shows some skills for @WashSpirit and then @nbarnhart flashes the gloves for @UtahRoyalsFC.

The Royals best chances came later in the half. In the 53rd, Christen Press had her shot stymied by Aubrey Bledsoe and several cracks at a rebound were also turned aside. In the 78th minute, Amy Rodriguez was played in but Bledsode came out to challenge and the shot went just high of both the keeper’s fingertips and the crossbar.

The result ended a three-match winning streak for the Royals and a three-match losing streak for the Spirit. The Royals (8-6-4, 28 pts) moved a point clear of Reign FC for the coveted fourth position and now trail the Courage by only the head-to-head tiebreaker for third. The Spirit (6-7-4, 22 pts) remain in 7th and also remain six points outside the playoff bubble. The Spirit are back in action this weekend when they host the Orlando Pride on Saturday night. The Royals have the weekend off and do not play again until after the FIFA break. They will next be seen hosting the Thorns on Friday, September 6.