The Lowdown: A glimpse of the NWSL’s future 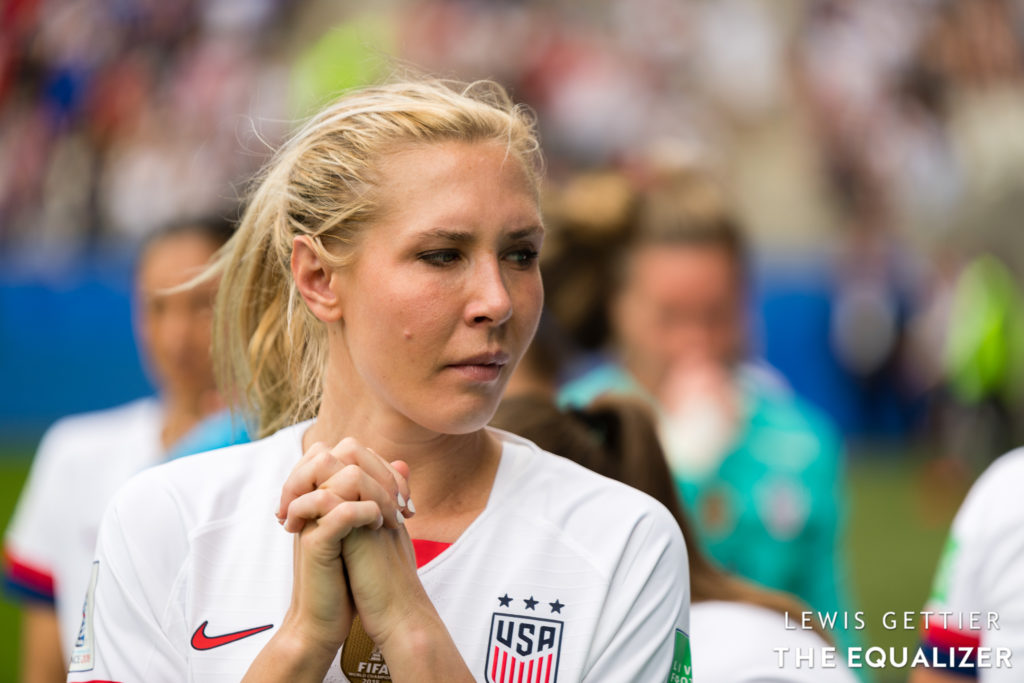 As fate would have it, the first National Women’s Soccer League match played at Red Bull Arena — the first for Sky Blue FC anywhere besides Yurcak Field — was played on a stifling, humid New Jersey afternoon. The weather could not dampen the enthusiasm in the stands, although it did turn out to be the winner on a day Sky Blue and Reign FC played to a dawdling, 1-1 draw. But the conditions also helped underscore one of the most basic amenities lacking at Yurcak.

“Honestly that’s like night and day,” Allie Long said when asked if she was excited for her post-match shower. “Imagine being this sweaty and then having to travel. It’s just disgusting.” Showers are hardly the only reason that Yurcak Field is soon to be an NWSL relic. But the fact that basic hygiene is even a discussion speaks volumes as to just how far behind the Rutgers University soccer complex is compared to the rest of the NWSL.

“It’s just humane to be able to shower after such a hard workout,” Long continued. “I think it’s unfair that we’re put in a stadium and not allowed to shower. It seems almost insane to me.”

Long has been playing professional matches at Yurcak Field since 2009 and played for Sky Blue in 2011, when the club was part of Women’s Professional Soccer (WPS). But that was the last league, and this one is now seven years old. It’s time for Red Bull Arena to be more the norm than Yurcak Field.

“Playing at Red Bull Arena allows you to feel like a professional athlete,” Long said. “Playing at Rutgers, you feel like you’re in college again. This is the environment, the stadium, the facility, the grass…everything about this is a professional environment. That should be the standard for us. When fans come here, it’s inspiring and motivating. Hopefully we can play here more.”

Sky Blue’s interim general manager, Alyse LaHue, has not been shy about acknowledging this. Last month, she announced the club’s intention to leave Yurcak Field after the 2019 season. As she has traveled around a league she was a part of at its birth in 2013, LaHue can see how standards have grown and how Sky Blue has to keep up. And she has put public pressure on herself and the club, acknowledging they are behind schedule in planning for 2020.

“If we could play here every game, that would be fantastic,” said Sarah Killion, the longest tenured Sky Blue player and team captain. “Obviously that’s a goal and a dream of the entire organization at Sky Blue. It’s just a matter of making that happen and doing it in an intelligent way. We know that this is the time when we can push women’s soccer forward toward a direction of having games at a stadium like this.”

A permanent move to Red Bull Arena in 2020 is very much on the table for Sky Blue, but so are several other options, and there are no firm plans yet for a venue in the post-Yurcak era. (LaHue does have experience in this regard, having been general manager of the Chicago Red Stars when they transitioned from a college stadium to what is now SeatGeek Stadium, and with a much better deal than they had during their WPS tenure.) The 9,415 fans that made their way to Sunday’s match smashed the club record, but that is likely a number that will be a bit out of Sky Blue’s reach on a week-in-week-out basis for the foreseeable future. But it should be noted that the attendance was nearly double what the national team got in the same venue for its World Cup sendoff just eight years ago.

Long was asked why fans flock to see the national team but are less willing to go see the same players compete with and against each other in a league environment.

“Was there like one commercial — I’m just asking — was there a commercial that said we’re playing on ESPN?” Long shot back. “Honestly? No, right? I don’t know. Was there an ad in a newspaper or a radio station, those things? That’s not my job. I’m not good at marketing; that’s why I play soccer. But those are the little things. People need to know.”

The Reign went through a venue change this season, moving from downtown Seattle, right under the Space Needle, to Cheney Stadium in Tacoma. As part of the deal, the club added investors and Long has noticed some subtle changes in awareness about the Reign. They are not entirely accidental.

“In Tacoma, you’ll see there are huge billboards and huge signs that say #ShePlaysHere,” Long said. I think that’s so cool. “It’s right where traffic is passing, right where people are walking every single day. It’s just something little that people don’t realize.”

To that end, she has grown tired of meeting people on road trips that are completely unaware that women’s professional soccer even exists, let alone that for anyone she meets it is happening right under their noses.

“I don’t know the logistics of it, but I feel like it’s about proper planning and having someone behind it that is pushing the sport and pushing the different markets in the right way. Some people still don’t know that there is a Sky Blue team here in the New York area. And that’s not okay seven years in. Or just to know there is a league. I’ve traveled and people say, ‘oh there’s a professional league?’ That’s not okay. I get mad at this point. We’re seven years in.”

Long was part of the World Cup team that repeated as World Champions barely six weeks ago. She also would not have had a sniff of that team if not for the NWSL, where she refined her game in Portland before getting her big break in early 2016. The importance of the league’s existence is not lost on her.

“People need to understand that if they want to play for the U.S. women’s national team, this league is crucial,” she said. “They need this league. I needed this league.” Long went on to single out Reign teammate Bethany Balcer, who now starts for the club after not even making it to a Division I college, but instead playing at NAIA school Spring Arbor. “That’s what this league does.”

This is the third consecutive World Cup cycle that the tournament has spurred an uptick in attendance for a professional league. In 2011, WPS was already taking on water and no amount of positive publicity could save it from itself by then. In 2015, the NWSL was poorly positioned to take advantage of the wave. To single out Sky Blue, their previous NWSL record attendance of 5,547 was set August 22, 2015. On that day, there was not so much as a table set up to take information for any new fan interested in returning in 2016. The team then changed ticket vendors and didn’t even put 2016 season tickets on sale until the holidays.

Four years later, LaHue was able to make the push to get Sunday’s match moved to Red Bull Arena after the team outsold Yurcak (whose attendance without some temporary bleachers caps out at around 5,000) weeks before kickoff. The World Cup wave will crash, but there is a chance that this one will level off with the league and its clubs in a better place than four years ago.

As for Sky Blue, the pressure remains on. The team will be back at Yurcak on Sept. 7 to host the league champion North Carolina Courage and, eight days later, the Chicago Red Stars. In an ideal world, they can name a 2020 venue before this season ends and they inevitably lose touch with some of their fans.

Killion says the team has made strides on and off the field and that the results are slowly beginning to show.

“Being here this long and sticking with it and seeing it kind of turn around, it gives me great joy,” she said. “This day makes it feel like we have the momentum and we have the ball rolling in the right direction.”

— Killion on how the atmosphere at Red Bull Arena compared to other stadiums, and other Sky Blue matches: “This atmosphere is up there with the best. Nine thousand of our screaming fans cheering for us, and not going silent when we shoot on frame or something like that, it makes all the difference for our momentum throughout the game.”

— Sky Blue joined the Red Stars, Reign, and Thorns as NWSL clubs to set single-match attendance records since the conclusion of the World Cup. The Thorns’ number of 25,218 set a new league record previously held by the Orlando Pride.

— Allie Long made no secret of that fact she would like to play for Vlatko Andonovski again next year — on the national team.

— Shea Groom may have enjoyed the Red Bull experience less than anyone else as she suffered a broken and displaced rib and ended the day in the hospital. There is no timeline for her return.

— Mark the Royals win over the Reign two Sundays ago as the most important of the season so far. Had the Reign carried their second-half momentum to a win, it would have left the Royals 8 points out of the playoffs and the league could have probably started promoting their four playoff teams. Instead, the Royals took over in the second half and now the teams are tied on points with seven games to play. They will meet again Sept. 18 in Tacoma.

— The Houston Dash (5 pts. back) and Spirit (6 pts. back) are within shouting distance, but neither are playing the kind of soccer lately that would suggest a run is likely. The Spirit host the Royals on Wednesday and would do their cause a world of good if they collected three points. The Dash are home to Sky Blue on the weekend.

— Speaking of Sky Blue, strictly from a soccer perspective, they are considerably better since letting go of Denise Reddy a little more than a month ago. They are hoping to name her full-time replacement soon.

— The Red Bull Arena match was Killion’s 100th in NWSL, all with Sky Blue. She joins a dubious list of players with 100 appearances having never been on a playoff team. The only other member is Kealia Ohai.

— Long chatted with the media Sunday while holding a note with the words “Thanks Allie” with a heart on the envelope. She said the note was from a local teacher whose school supplies for the year she purchased. Long, who is from the area, bought classroom supplies for multiple teachers through the #clearthelist movement. One of them was in the stands Sunday and gave Long the letter.

The ICC is a spectacle, and that’s exactly the point
NWSL Mid Week 19 Preview