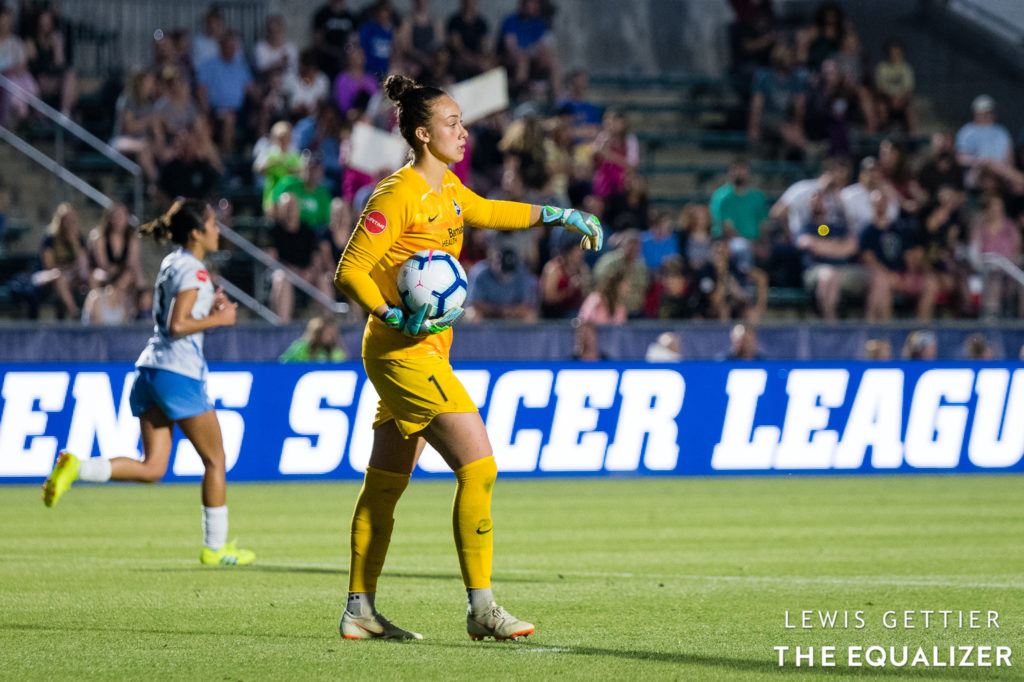 It was almost immediate. After Sky Blue FC took advantage of Casey Murphy coming off her line and Elizabeth Eddy scoring against her, Reign FC wouldn’t let the New Jersey club take the lead for long. Instead, Allie Long found a pass from Ifeoma Onumonu and then fed the ball to Jodie Taylor, who calmly slipped it past Kailen Sheridan.

All of this happened at Red Bull Arena — not Yurcak Field. Due to all the hard work from Alyse LaHue and other staff members of Sky Blue FC, the two sides were able to feature at Red Bull Arena. It was the first-time in the stadium’s history that it hosted an NWSL match. The soccer-specific stadium is the nome of Major League Soccer club New York Red Bulls.

The atmosphere for the teams in Red Bull Arena was electric. The final count was 9,415 fans, which breaks Sky Blue’s franchise record.

The match did feature a somber moment, though. Early in the first half, Shea Groom went down after colliding with Carli Lloyd. With a rib injury, Groom looked to be in a tremendous amount of pain. She was stretchered off the pitch and taken to a nearby hospital for further evaluation. Onumonu took her place in the 19th minute.

Throughout the match, it was confirmed that Groom has a broken rib.

Sky Blue FC kept an even-keel pace throughout the match. Late in the match, Raquel Rodriguez won a free kick right outside of the box, after Allie Long brought the Costa Rican down. It was one of many chances that did not go in the back of Murphy’s net. Sky Blue registered two shots on goal, courtesy of chances from Paige Monaghan and the goal from Eddy.

Meanwhile, Kailen Sheridan was busy on the opposite end. The Canadian goalkeeper stretched at every single angle to make five saves against Beverly Yanez, Bethany Balcer, Rosie White and Onumonu.

We've seen Kailen Sheridan come up big a time or two for @SkyBlueFC.
She does it again with this save! #NJvRFC | 1-1 | #NWSL pic.twitter.com/PlAWEg85ck

NWSL Saturday: Press-Rodriguez combination works again in Orlando
Red Bull Arena: What could have been and what might still be for Sky Blue FC