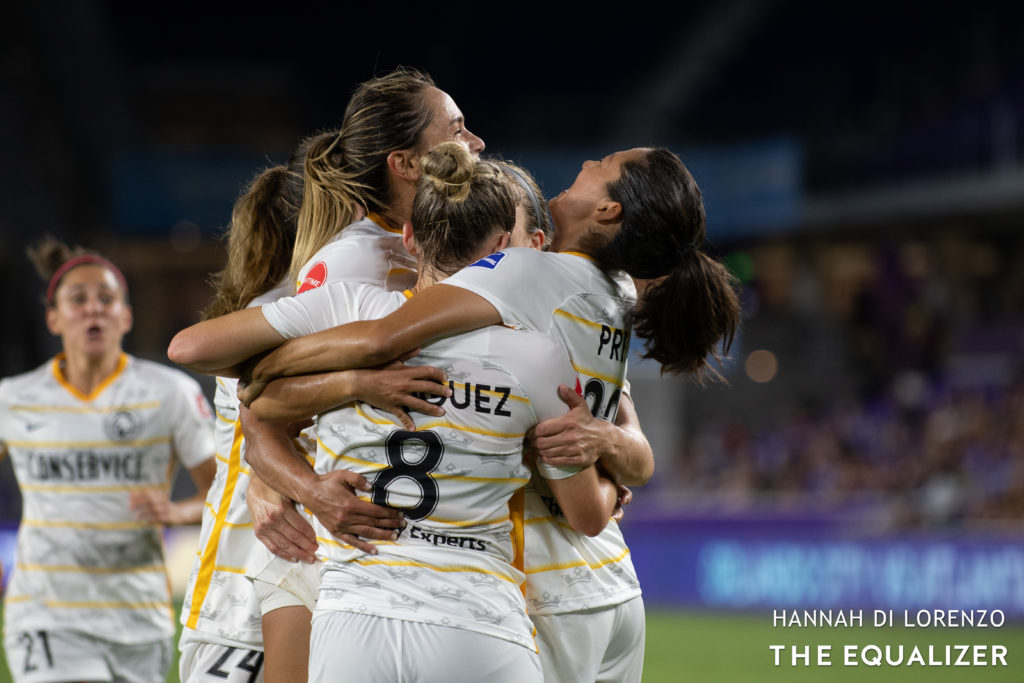 Call it a clean sweep, if you will. The Utah Royals FC went into Exploria Stadium on Saturday night to take on the Orlando Pride for the third and final time this season. Utah saw their combination of Christen Press and Amy Rodriguez work wonders again, as both players found goals in the second half to lift the Royals in their third win over Orlando this season with a 0-2 final.

Orlando had a few changes in formation, due to last week’s red cards against defender Julie King and striker Marta. Claire Emslie, Chioma Ubogagu and Marisa Viggiano made up the front three in Marc Skinner’s formation. However, the head-turning changes came on the backline, as Ali Krieger went into a makeshift centerback role in pace of King. Meanwhile, Erin Greening took Krieger’s role at right back.

.@ChristenPress is on 🔥 this month! She's opened the scoring for @UtahRoyalsFC 👑

Ashlyn Harris had a busy evening in goal, especially in the first half. Harris was forced to make a couple key saves against Press to get some momentum for the Pride. However, Utah dominated throughout the whole match, registering nine shots on goal. Harris was forced to make seven saves against Mallory Weber, Katie Stengel, Press and Rodriguez. Meanwhile, Nicole Barnhart was only tested once on the other end of the pitch. Barnhart’s only save came against Ubogagu.

Of note, Alex Morgan made her return back to league action since departing for the World Cup. Morgan was dealing with a right knee injury, but made her way onto the pitch in the 68th minute, replacing Ubogagu.

Orlando will receive King back for a mid-week contest against the Chicago Red Stars on Wednesday. However, they will continue to be without the Brazilian legend Marta, who was given a two-match suspension for scuffling during last weekend’s contest against Houston.

Meanwhile, the Royals will return to action on Wednesdays as well, traveling to take on the Washington Spirit.

It didn’t take Hayley Raso long to find the back of Aubrey Bledsoe’s net. Only five minutes into the match against the Washington Spirit, one of the Portland Thorns Australian internationals slotted her goal past Bledose to give the home side an early lead. It was the first of three goals for Portland, who picked up three points in a 3-1 victory over Washington.

The league leaders are off to a 🔥 start! @HayleyRaso scores on a curling effort to give @ThornsFC the lead.

However, Adrianna Franch wouldn’t notch a clean sheet. Andi Sullivan ruined those hopes in the middle of the second half, blasting a shot outside the penalty area. All eyes were on Portland though, who dominate at home. In front of a bustling crowd that featured 20,895 fans filling up the seats of Providence Park, Emily Sonnett and Christine Sinclair added goals to give fans something to cheer about.

Sonnett’s goal came off a corner kick, driven in by forward Tobin Heath. Meanwhile, Sinclair’s goal in the second half came off a rebound and then the Canadian chipped the shot over Bledsoe.

It's been all 🌹@emilysonnett doubles the home side's advantage.

With the victory, Portland now climbs up to the top spot in the NWSL, broadening their lead with 33 points. On the other hand, Washington continues their downward trend, as they now sit in seventh place and out of a playoff spot. However, the competition in the NWSL is tight, with matches still continuing this month and all of September.

Portland will return to action against the Chicago Red Stars next Sunday. They’ll be facing a Red Stars team that currently sits in second place, but has a mid-week match against Orlando on Wednesday. Meanwhile, the Spirit will feature Wednesday night against the Utah Royals FC, who currently hold fourth place.

Doing what she does best. @sincy12 adds another ⚽️🥅 for @ThornsFC.