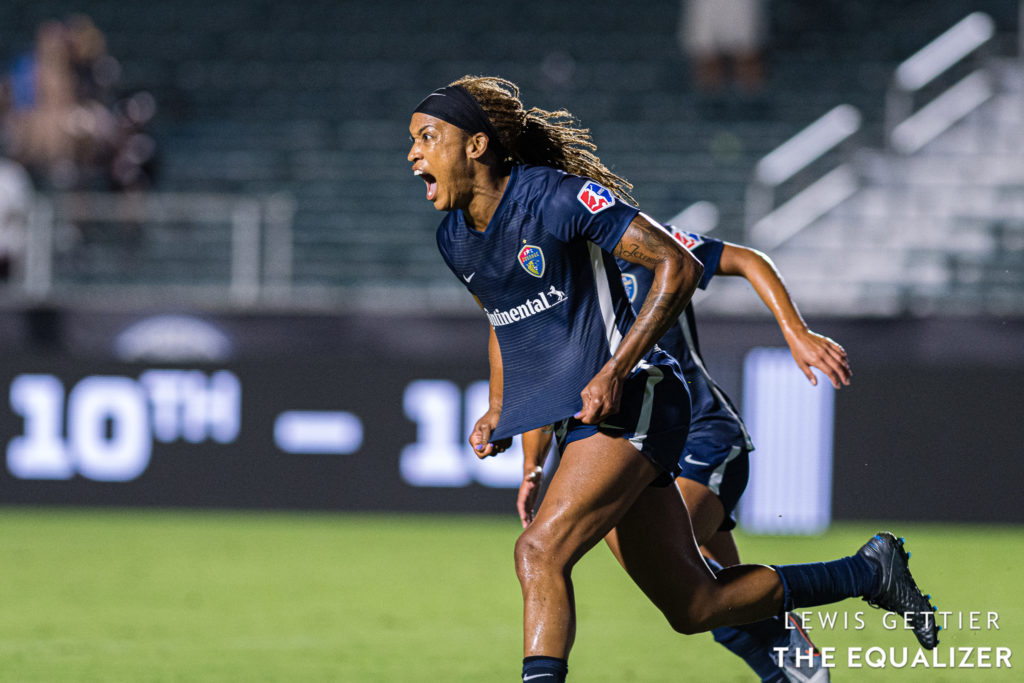 Cary, North Carolina — It’s never really a North Carolina Courage match until there’s a weather delay. That’s a running joke between fans in the NWSL and in Courage Country. However, it came to fruition last night when the Courage took on Manchester City in the second annual Women’s International Champions Cup.

The four-team tournament kicked off yesterday and will wrap up on Sunday. The Courage entered the tournament looking to hold onto their crown. However, in the 41st minute, it almost looked like the Courage wouldn’t even head back to the championship game. Georgia Stanway found the back of Katelyn Rowland’s net, off an assist from former NWSL player Janine Beckie. North Carolina looked for chance after chance, even finishing the match with 39 shots, with 12 registering on-goal.

Then, the weather delay took place and it lasted approximately 73 minutes. However, it couldn’t have come at a better time for North Carolina. The reigning NWSL champions took the time to regroup and then came out firing on all cylinders late into the evening. Heather O’Reilly found McKenzie Meehan for a goal in the 84th minute to tie it up.

However, Jess McDonald wasn’t going to let the match go to penalty kicks. Instead, McDonald edged out two defenders, managed to keep control of a bouncing ball and slotted the game-winning goal past 19-year-old Manchester goalkeeper Ellie Roebuck.

Today's goal of the game brought to you by @LaLigaEN. In the dying moments of the match @TheNCCourage's @J_Mac1422 delivers the match winning goal over @ManCityWomen to book their place in Sunday's WICC Final! #WICC19 pic.twitter.com/fygKM3kSWm

McDonald’s goal meant that North Carolina would go back to the final.

They’re also going up against a familiar opponent in hopes to keep their title. In the earlier match, Wendie Renard provided a late game-winning goal, just like McDonald, to secure victory over Atletico Madrid. In last year’s final in Miami, both sides met up and the Courage routed the European champions with a 1-0 victory.

Now, it all comes down to Sunday. Here’s a look at the schedule for the final day of the ICCWC.