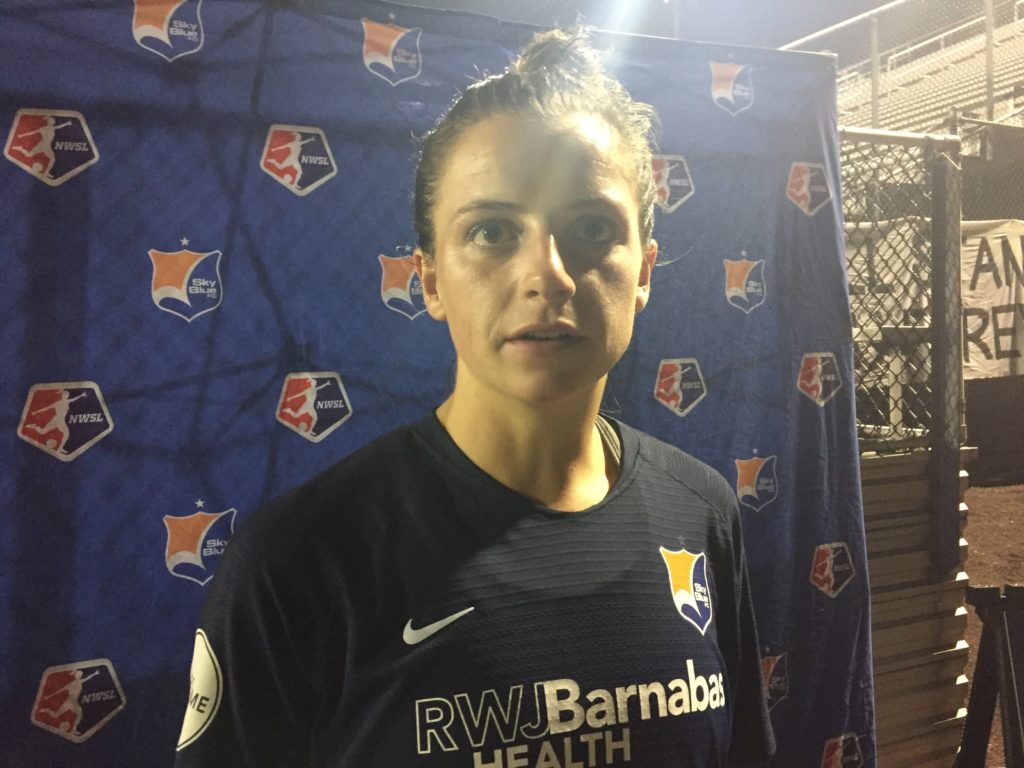 Paige Monaghan was the hero of the evening, scoring both goals. After a quiet first half and a lull of a second half, Monaghan found the back of the net in the 71st minute. Carli Lloyd notched the assist on the rookie’s first of two goals. Meanwhile, Sky Blue saw their lead cut, as Sam Kerr equalized against her old club late in the match.

However, after Kerr’s equalizer, Monaghan took the lead right back.

The 22-year-old found the back of the net again, this time just two minutes after the Australian’s goal. Sky Blue FC took home three points in front of their crowd of 2,558 fans at Yurcak Field.

GOAL! That's quite the way to score your first #NWSL ⚽️, @paigeqmonaghan. 🎯

For the first time in a long time, Sky Blue FC does not sit at the bottom of the NWSL standings. Instead, they have taken over eighth place from the Orlando Pride, sitting with 12 points. Meanwhile, Chicago remains in second place, in a tight race for the top spot.

Sky Blue FC goalkeeper Kailen Sheridan made plenty of big saves against the Red Stars, finishing off her night with five saves. The Canadian international denied goal opportunities from Kerr, Julie Ertz and a stellar free kick save against Savannah McCaskill. Meanwhile, on the other end, Alyssa Naeher made two saves to stop Carli Lloyd and Monaghan.

Sky Blue will look to carry their momentum against Reign FC on Sunday, in a quick-turnaround match. Sky Blue FC will be at home, but at a different stadium. They’ll remain in New Jersey, but the match will be held at Red Bull Arena. Meanwhile, Chicago has a few more days rest, with a Wednesday match next week against the Orlando Pride.

Drama in the Garden State! Who else but @SamKerr1?

Of note, Imani Dorsey left the match in the 40th minute with what appeared to be an injury.

One on one with Alyse LaHue: Finally, some positive signs for Sky Blue
NWSL Weekend Preview: Week 18