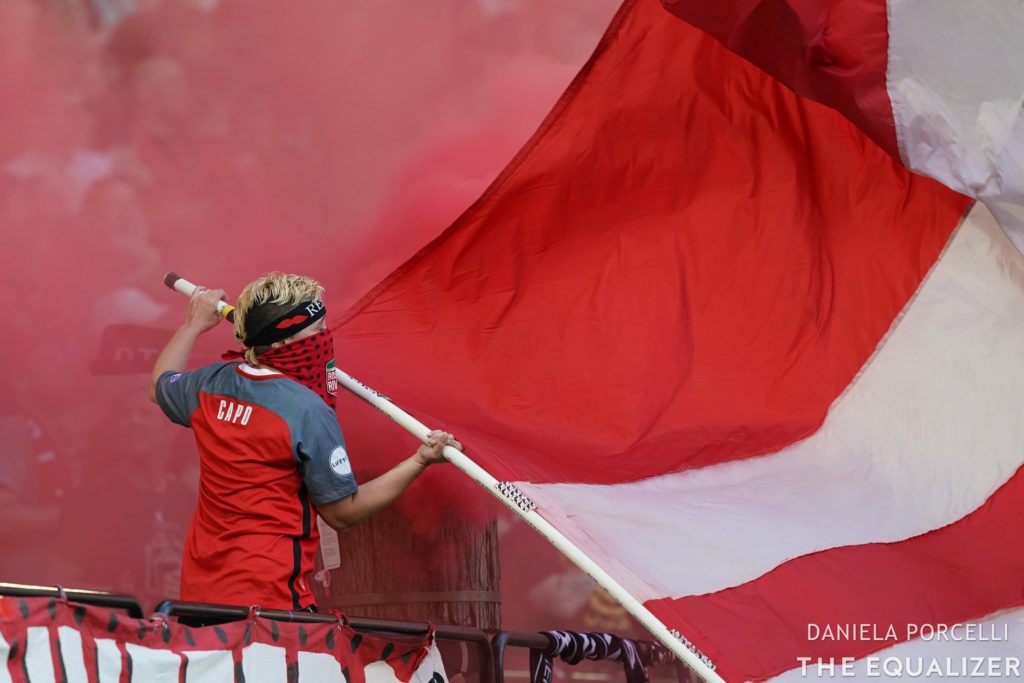 Gameday in Portland on Sunday proceeded as it always does: the drums, the smoke, the chanting (occasionally laced with profanity), the vociferous booing whenever the home crowd felt they’d been slighted by a ref. It felt like any other Thorns game.

On the stat sheet, though, there was one difference. With a sellout crowd of 25,218 people in attendance to watch the home team beat the North Carolina Courage 2-1, this was the best-attended National Women’s Soccer League game ever, beating Orlando’s 2016 record by almost 2,000 fans.

“[It was] incredible,” said Thorns midfielder Lindsey Horan after the game. “There’s obviously nowhere else like it, and I think [the fans] were a huge part of the reason we won today.”

The narrative around the support for women’s soccer in Portland has long been one of exceptionalism, and in that sense, this new record is the righting of what felt like a kind of historical error. That Orlando number, while laudable, was for the team’s first-ever home game, and the Pride have averaged under 10,000 since. The Thorns, on the other hand, have always had the best attendance in the NWSL, and have sold out Providence Park a handful of times in the past; when the stadium remodel was completed in June of this year, expanding by just over 4,000 from its former capacity of 21,144, many saw a new attendance record as an inevitability.

But while Portland is still handily in the lead attendance-wise, look around the league, and you’ll notice that many teams are posting big numbers. Sky Blue sold out Yurcak Field in their first match after the World Cup, and will play a game at 25,000-seat Red Bull Arena on August 18. The Spirit and the Reign have both drawn more than 5,000 fans to each of their home games since the World Cup, and Chicago drew over 17,000 late last month as part of a concerted effort to capitalize on World Cup viewership.

The question that is always asked is whether any of this will last. The World Cup boosted attendance in 2015, only for some teams’ support to regress over the next three years. But there are reasons to be optimistic that this time around might be different.

For one thing, U.S. national team players have been advocating for the NWSL in a way that would have been hard to imagine back in 2015, including Alex Morgan bringing up the league in her acceptance speech at the ESPY awards. “I think everyone that was involved in the World Cup has come back and kind of made a big push to make people want to watch more,” said Horan. “I think we are making a push, and hopefully this league keeps going and more teams get involved, and we hope for the best.”

Part of that has to do with a recognition that the U.S. national team would not be as good as they are without a domestic league as strong as the NWSL, and part of it is simply due to the fact that with this league in its seventh year, its continued existence seems much more likely than it did in 2015. “I think that we’re taking steps in the right direction,” said Courage midfielder Sam Mewis after the game. “I feel like it’s stable… I’m relying on it, and I’m counting on playing here for a long time.”

Even for allocated U.S. players, whose club salaries are paid by USSF, the NWSL has become a priority. “I don’t feel like it has to be a feeder league to the national team anymore,” said Mewis. “Being in the NWSL is a huge deal and I think that a lot of times, that gets overlooked… I kind of want to start looking at the NWSL as totally separate, and something where playing here is — that’s what people want to do.” 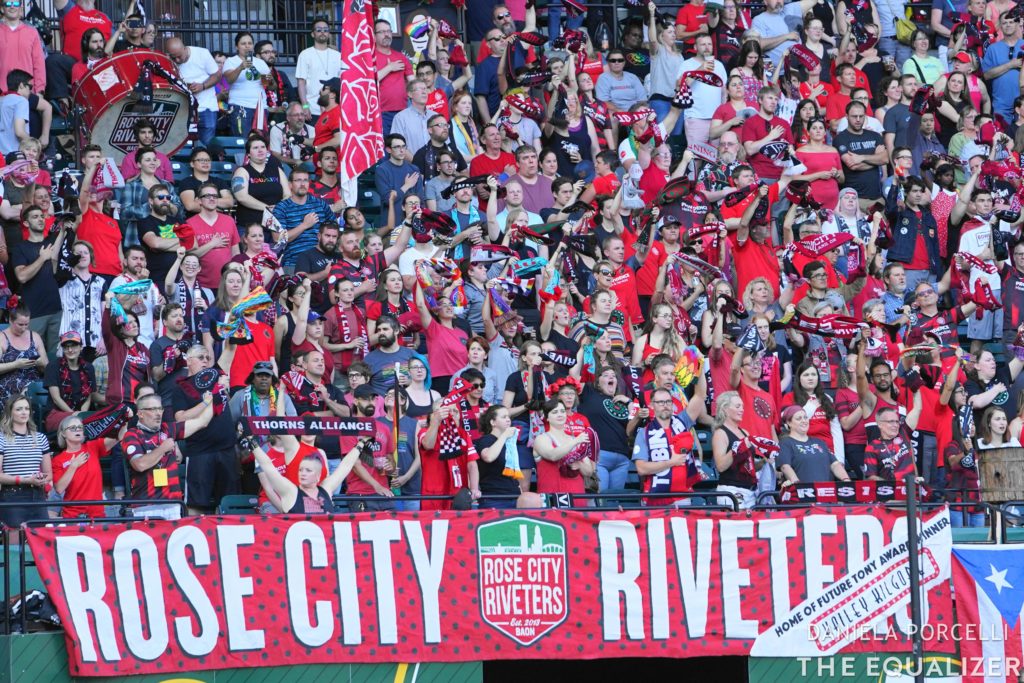 Obviously, players aren’t responsible for getting fans through the gate, but it’s crucial to the continued growth of the league that its perceived place in the soccer ecosystem is changing. It’s something even sponsors are beginning to push for, with Budweiser, in a full-page New York Times ad, announcing its sponsorship deal with the NWSL, calling on fans to start seeing the league as a key part of that ecosystem.

For the NWSL to draw sustained interest, fans have to start seeing the competition in the league itself as fun and exciting in its own right, not just as a platform for a handful of celebrity players, and that’s another positive aspect to Portland’s new attendance record. This record wasn’t set at the Thorns’ first or second game after the World Cup—it was for a rematch of the 2018 Championship, in what’s become the fiercest rivalry in the NWSL.

“I think it’s people who are in tune with what the Thorns have been doing and have been following us the entire season, and they understand it’s a big game for us,” said Midge Purce after a training last week. “It’s against a team that we played in the championship the last two years, and I don’t think that’s lost upon our fans.”

“I think that that’s the kind of thing that will sustain itself,” said Mewis. “I think the hype from the World Cup will eventually simmer down a little bit, but if there’s rivalry games within the league, every time that happens there’ll be a big crowd. And those are the kinds of things I think are worth hyping up. If there’s a huge rivalry between Portland and Seattle and other teams, like, it doesn’t matter if it’s a World Cup year or if there’s even World Cup players there, because people will always want to watch those.”

It’s also important to contextualize how big a deal a number like 25,000 is even in Portland. The Thorns have led the league in attendance by so much, for so long, that the crowds here are often taken for granted. In 2013, Portland drew an average of 13,320 fans, the only NWSL team averaging more than 5,000. By the end of 2014, when the Thorns had shown they could maintain those numbers, the narrative was set. The team had become the lone exception to the rule that nobody wants to watch women’s club soccer. Of course Portland draws big crowds, the story goes. They’re Portland! So it is; so it has always been.

Go back and read those numbers again, though. The Thorns have always been handily in the lead attendance-wise, but their average grew by more than 3,000 between 2013 and 2018. A crowd like the one that showed up on Sunday would have been unthinkable for the Thorns just a few years ago.

It’s also worth noting that as popular as the Thorns are, the Timbers — their MLS counterparts — remain a much bigger deal. The boys in green have sold out every home game since entering MLS in 2011. The waiting list for season tickets has more than 10,000 names on it. In other words, the popularity of women’s soccer even in Portland is a function of the popularity of soccer in general, a lesson we should take into account when we look at NWSL attendance in cities like Chicago or Houston, where the Fire and the Dynamo, respectively, draw underwhelming crowds.

The notion that Portland is exceptional allows for a level of complacency around attendance elsewhere. Since these numbers are outliers, it’s easy to brush them off as having no meaning for the rest of the NWSL. But the fact that attendance here has grown, a little at a time, belies that assumption.

The Thorns may be a unique success story in women’s soccer, but that doesn’t mean they’re a completely separate phenomenon from the rest of the league. Portland may be leaders in attendance, but there’s reason to think this moment in NWSL history is the beginning of real change.