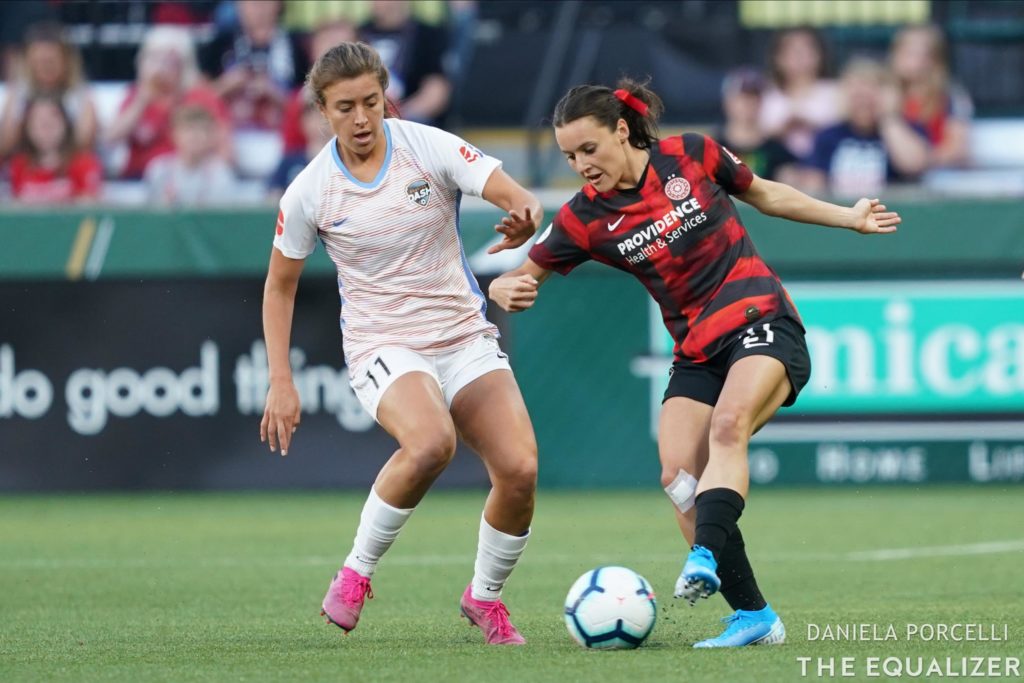 The Portland Thorns pulled off a second-half comeback to climb to the top of the table in front of an NWSL-record crowd at Providence Park.

North Carolina got right down to business after kickoff. In the 4th minute, Lynn Williams launched a long ball up the right flank to Kristen Hamilton, who sent a cross into the box. The ball fell behind Williams, right to the feet of an unmarked Crystal Dunn, who wasn’t going to miss at close range.

.@crysdunn_19 was left open in the box and that's not a place you want to be if you're @ThornsFC. Here's the opening goal for @TheNCCourage.

That wasn’t the last opportunity given the Courage, who were assisted by the Thorns dropping deep and giving them plenty of space. Perhaps because they had so many numbers behind the ball, the Thorns struggled to launch quick attacks, although Tobin Heath was as dangerous as ever, flashing low crosses across the face of goal. Portland also missed the width provided by Ellie Carpenter and Meghan Klingenberg, as Katherine Reynolds and Elizabeth Ball did not get up the flanks as often as the two regular starters.

Portland had a few corners to test Stephanie Labbe, but it was Dunn who came closest to scoring again late in the first half when she was denied a brace by the fingertips of Adrianna Franch, not the first time the keeper would come up huge.

Portland started the second half with two substitutions (Hayley Raso and Midge Purce), and the difference in energy was immediate. In the 56th minute, Ball sent in a cross toward Purce. Labbe went up for it, but a collision with Merritt Mathias pushed her off balance, and the ball deflected off of the goalkeeper and into the back of the net for the equalizer.

.@ThornsFC have upped the pressure, which led to an own goal for the equalizer earlier in the half.

Amazingly, the game-winning goal came off a Courage player as well. In the 82nd minute, Raso got on the end of service from Christine Sinclair, but she was facing away from goal. The ball deflected off the Aussie, into Abby Erceg, and past Labbe for another own goal.

In the dying minutes of the match, Franch earned her paycheck several times over by pulling off several top-notch saves the keep her team in the lead, denying Jessica McDonald multiple times.

Amy Rodriguez, Lo’eau LaBonta and Katie Stengel all scored for the visiting Utah Royals in a 3-1 victory over Reign FC on Sunday in Tacoma. The win keeps Utah in the playoff race.

Stengel opened the scoring in the 3rd minute with an empty-net tap-in after Rodriguez beat Reign FC defender Lauren Barnes. Rodriguez’s shot from an acute angle beat Reign goalkeeper Casey Murphy, but hit the post and bounced to Stengel for the finish.

.@AmyRodriguez8 with excellent work before @ksteng12 turns the ball into the back of the net. ⚡️ fast start for @UtahRoyalsFC.

Shea Groom pulled Reign FC level just before halftime with a smashing shot from inside the 18-yard box, but the Royals took control after halftime. LaBonta walked through the spine of the Reign’s team on a wonderful solo effort before beating Murphy for the eventual game-winner.

.@L0momma takes them all on. She slices through the heart of @ReignFC's defense to give @UtahRoyalsFC the lead!

Rodriguez finished the scoring for Utah with a tap-in after Murphy coughed up a sloppy rebound.