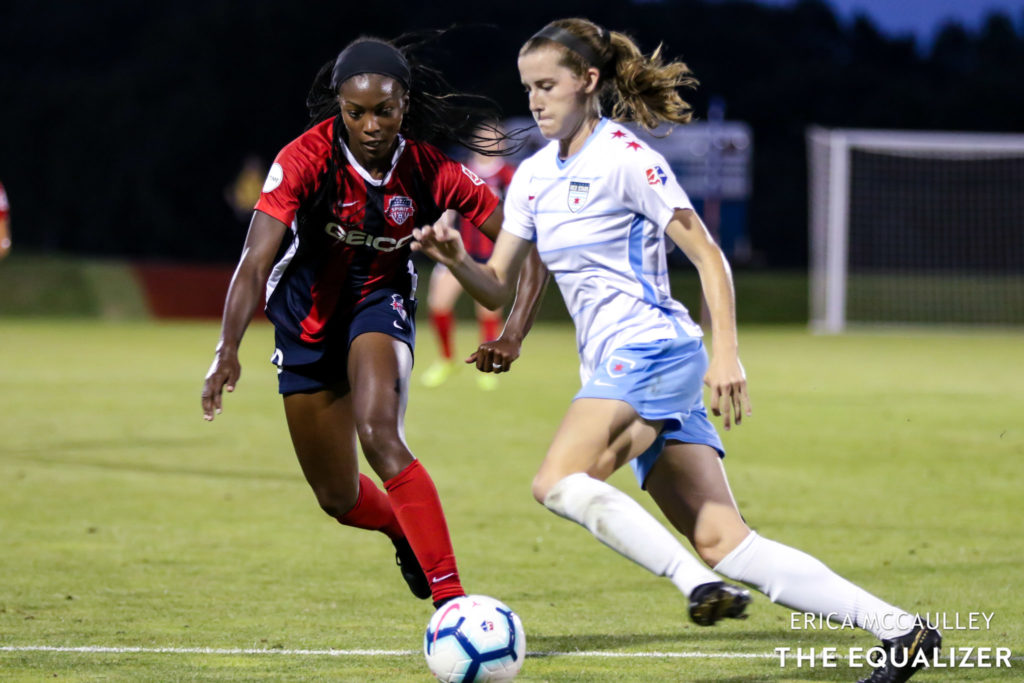 The Chicago Red Stars are keeping their train rolling. The Red Stars picked up their fifth-victory in a row with a road win over the Washington Spirit. Yuki Nagasato tapped in the game-winning goal in the 65th minute. Casey Short found Nagasato inside the box, who managed to defeat her defender to find space with her head.

Chicago’s win, for the time being, boosts the club up to first place in the standings. North Carolina only sits behind in second place with 28 points, just one shy of the Red Stars.

.@CaseyShort3 delivers another dangerous ball and this time it leads to the opening goal as @Yuki_Ogimi nods it home.

Washington had plenty of lineup changes, due to the suspension of Paige Nielsen and an injury to Mallory Pugh. However, Rose Lavelle did make her return to the starting lineup, as she did not sustain any injury during the U.S. Women’s National Team’s Victory Tour. Amy Harrison took Pugh’s place up top, while Andi Sullivan was slotted in a defensive position.

Alyssa Naeher had a relatively busy day in goal, making three saves. The FIFA Women’s World Cup champion denied attempts from Ashley Hatch, who was the only member of the Spirit to register any shots on goal. Meanwhile, on the other end of the pitch, Aubrey Bledsoe recorded two saves to stop defender Tierna Davidson and Nagasato.

Chicago will now gear up for a mid-week match against Sky Blue FC on Wednesday. Meanwhile, the Spirit will rest up for a late Saturday match against Portland.

.@chiredstarsPR opens up the @WashSpirt defense, but just can't find the finish to double the lead.

It wasn’t the return Julie King wanted. Instead, it was the one that she wanted to avoid at all costs. King, who hasn’t been on an NWSL pitch since her time with the Boston Breakers in 2017, made a start just days after being signed by the Orlando Pride. However, King was shown a straight red card in the 61st minute, right outside the box, for a foul in Kristie Mewis.

Luckily for King, Sofia Huerta missed her free kick shot. However, the Dash would get another chance late, this one from the penalty spot. Rachel Daly stepped up and converted the attempt to secure the 1-0 win in a contentious game.

.@RachelDaly3 puts @HoustonDash in the lead from the penalty spot.

Pride players had already surrounded referee Reyna Fonseca to argue the decision to award the penalty. Kealia Ohai went down in the box after what appeared to be light contact from Orlando substitute Kristen Edmonds. Fonseca was discussing the decision with her assistant referee when the scuffle broke out.

The loss was Orlando’s 10th of the season. The Pride will now look to bounce back quickly, as they face off with the Utah Royals next weekend. Meanwhile, the Dash will look to build a streak of wins, as they have been a rollercoaster of win-loss during the last four matches. The Dash face off with Sky Blue FC in two weeks.

Getting closer to an opening goal, but @schuerta's effort comes off the crossbar.