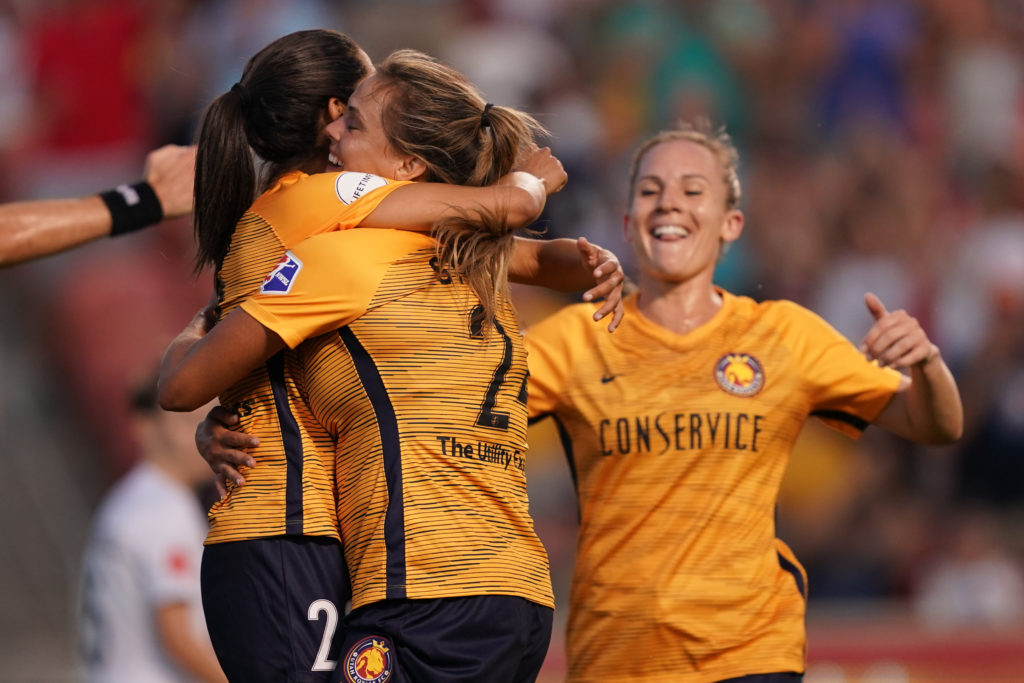 Christen Press scored a brace and Amy Rodriguez joined her on the scoresheet for the first time as Utah Royals FC teammates in a much-needed, 3-0 win over Sky Blue on Wednesday night at Rio Tinto Stadium. Press was denied a hat trick late when Imani Dorsey saved a shot off the line.

Press put the Royals on top in the 27th minute on an attack that went straight through the spine of Sky Blue. Lo’eau LaBonta made the final pass that Press ran onto after a slight deflection and her finish beat Kailen Sheridan to put the Royals on the board.

.@L0momma helps set it up and @ChristenPress isn't missing from there.

Two minutes later the Royals used the left side to double the lead. As Sky Blue overloaded that flank, LaBonta was all alone on the right to receive a pass. She crossed it back central to Press who struck it first time to make it 2-0. With no deflection, LaBonta was credited with the assist this time. Prior to the goal the Royals had only played with a multi-goal lead for a single minute of play all season.

Any hopes of a Sky Blue comeback were dashed when Rodriguez put a gorgeous finish on a Mallory Weber cross barely two minutes into the second half.

.@UtahRoyalsFC are just rolling as @AmyRodriguez8 adds to the lead.

The Royals (6-6-3, 21 pts) jumped the Dash for 6th place but remain 5 points adrift of a playoff berth. They face a pivotal trip to face Reign FC on the road Sunday with Reign FC currently holding down the 4th and final playoff position. Sky Blue FC (2-11-3) have the weekend off before hosting the Red Stars next Wednesday night at Yurcak Field.

For the second time in six days, Rosie White scored to lead Reign FC to a 1-0 win. This one came over the rival Portland Thorns FC and pulled the Reign within 2 points of the top in what has been a tight battle for the Shield throughout the season. Despite being 2 points off the top though, the Reign still sit 4th but now have 5 points of breathing space to the Washington Spirit and Utah Royals who defeated Sky Blue on Wednesday.

After an even first half, White got the Reign on the board in the 55th minute tapping in a header from Shea Groom inside the six. But the play was created by Ifeoma Onumonu who took a pass from Steph Catley and went to work. Forst Onumonu beat Elizabeth Ball on the end line, then danced to keep the ball in play before spinning around Hayley Raso and sending the cross to Groom.

The Thorns sat on the Reign through more than five minutes of stoppage time and got quality chances from Christine Sinclair and Emily Sonnett but both wandered high.

The Reign (7-3-5, 26 pts) now hold a 10-8-3 regular season edge on the Thorns, but it was the Thorns who won the only playoff game between the clubs last season. The Reign are home again Sunday to host Utah Royals FC. The Thorns (7-3-6, 27 pts) remain in 2nd place but now give a game in hand to the Reign, Courage, and Red Stars in the battle for the Shield. Next up is a showdown with the Courage on ESPNews this Sunday afternoon.