The Lowdown: Roller-coaster Red Stars back on upward trajectory 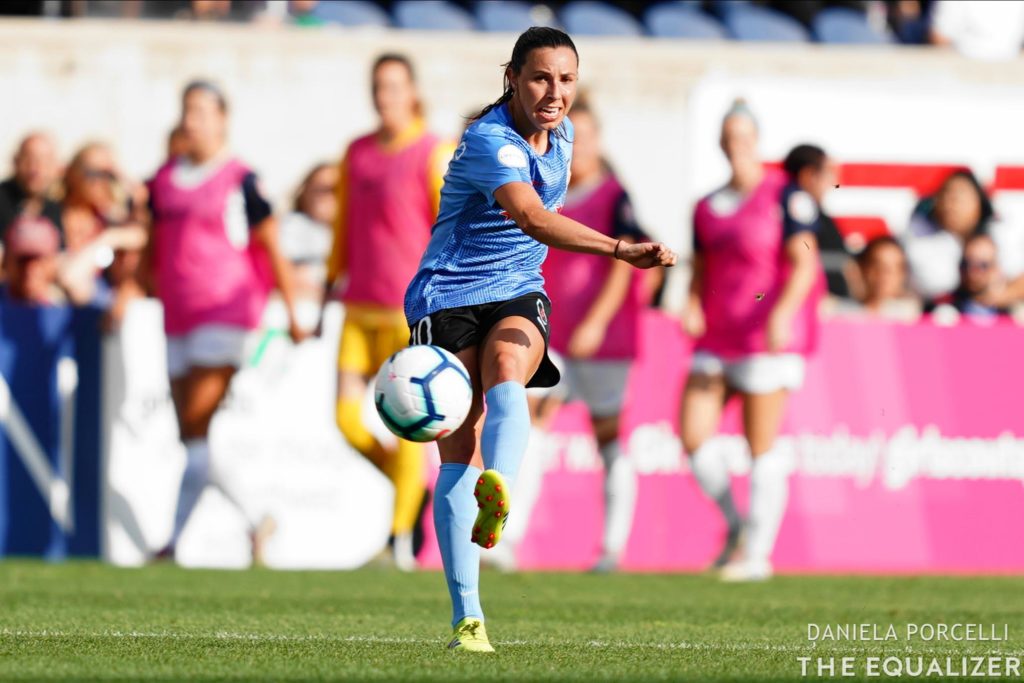 The Chicago Red Stars are the team that can’t quite seem to decide how good they are. In a National Women’s Soccer League season dotted with inconsistencies across the board for all nine clubs due to the World Cup, the Red Stars have taken it to extremes. From their three straight matches being shut out while without Sam Kerr, and a later home loss to Sky Blue FC with Kerr on the pitch, to last weekend’s triumph over Utah Royals FC, the Red Stars have kept us guessing much of the 2019 season.

Rumors of Kerr’s departure to Europe continue to intensify, and the team that has been dismissed in the semifinals four straight seasons is poised to get back for a fifth try. But how good are they? And which version of the Red Stars most resembles what the side will look like over the final weeks of the season?

“We’ve obviously had some disappointing results at home with this group,” head coach Rory Dames said, the reference to “this group” being his team without U.S. national team players Julie Ertz, Alyssa Naeher, Tierna Davidson, and Morgan Brian. “So we just challenged them. It was important for this group of players to prove what they’re capable of doing. I’m happy for them.”

Dames’ comments came after Saturday’s 2-0 victory over Utah Royals FC. There were plenty of occasions in which the Royals could have equalized or seized control of the match, but for the most part the Red Stars were up to the task. And if not for Nicole Barnhart’s performance in the Royals’ goal, the score very much could have gotten out of hand.

“We bent but we didn’t break,” Dames said.

The longtime Red Stars coach often analyzes matches based on the chances created, believing that doing that consistently will ultimately lead to a lot of victories. Kerr only scored one goal on Saturday, but she was everywhere and had more chances than some of games in which she scored a hat trick. The interplay between Vanessa DiBernardo and Yuki Nagasato, combined with one of the best games this season from Danielle Colaprico, had Kerr in behind the defense regularly. Not to be forgotten is the much improved distribution skills of Nikki Stanton since arriving in Chicago in 2018. For her part, Kerr was not sharp in her finishing — Barnhart’s heroics aside — but did make the most of Utah having Gabi Vincent in central defense instead of Becky Sauerbrunn.

Two players who have shown improved play from the start of the season are DiBernardo and defender Sarah Gorden. Dames met with both players over the last few weeks and had some hard conversations about where they stood.

“I told Vanessa that ‘you’re not hurt anymore. You’ve got to let it go,’ while also challenging her to score more. I think she’s had a great response. She does so much for the group of keeping us organized, of triggering the pressure, of setting the lines. I’ve said this for years: she’s the most influential player in our group, so not having her prohibited some of the stuff we could do. We’re starting to hit our stride and find our way and she’s a big part of that for sure.”

On Gorden, recently named to the NWSL Team of the Month for July, Dames called her the best center back in the NWSL “for that month.” Her and Katie Naughton have formed a strong enough partnership that Ertz is likely to be in the midfield when she gets back and settled in following another exodus to play for the U.S.

To ice Saturday’s match, Savannah McCaskill and Brooke Elby combined on the goal to make it 2-0. Both had come off the bench late and made an almost immediate impact. With the U.S. enforcements on the way, the Red Stars will be plenty deep enough, plenty dangerous enough, and plenty tough enough to challenge any team in the NWSL.

We will now need to see if they can be good enough to maintain their strong level, and if so, whether this year’s playoffs will pan out differently than the last four. The Red Stars are back to having regular-season success against the North Carolina Courage, something they could not replicate two years ago in a 1-0 playoff loss that was not as close as the score line suggests. The Red Stars’ struggles against the Portland Thorns have been well documented. The first of their 62 league wins came against the Thorns, but none have come since.

The history of the Red Stars — the only NWSL team never to finish under .500 — has been dotted with highs when it seemed things would go awry, and lows when it seemed they were set to dominate. The 2019 roster is good enough to win it all. Crunch time is coming.

— Sky Blue FC sent their fans a rare dose of good news when they announced the August 18 match against Reign FC would be moving to Red Bull Arena in Harrison, New Jersey. The club previously announced the match as a sellout and the move to Red Bull will allow more tickets to be sold. This will be the first Sky Blue home match in NWSL played outside Yurcak. General manager Alyse LaHue has said the team is seeking a new venue for 2020 and Yurcak Field is about to be below standards for the league set forth by U.S. Soccer.

— Was there enough in Paige Nielsen’s grab of Debinha to warrant a game-changing red card on Saturday? I’ve seen worse fouls let go. That said, if it was a foul then it was a red card.

— In Portland, there were several questionable calls and non-calls. I didn’t like the call that gave the Thorns their penalty and only goal of the night, but there was a blatant miss when Gina Lewandowski took down Midge Purce in the box. A later red card to Amandine Pierre-Louis for a second yellow card happened minutes after another foul that easily could have seen her sent off.

— The Nielsen red card exposed some of the Spirit’s issues with defensive depth as they dropped Andi Sullivan back for the last 66 minutes. It will be interesting to see if Richie Burke comes up with a different option for Nielsen’s suspension.

— Cheyna Matthews was excellent in her role as the lone striker with the Spirit down a woman and nearly helped them get an equalizer.

— Amber Brooks has taken her consecutive minutes streak to 5,763, putting her in striking distance of Abby Dahlkemper’s league record of 5,850. She will need to start and play 88 minutes Saturday in Orlando to break the mark.

— Christine Sinclair’s penalty was the 200th attempt in regular season play and the 138th conversion.