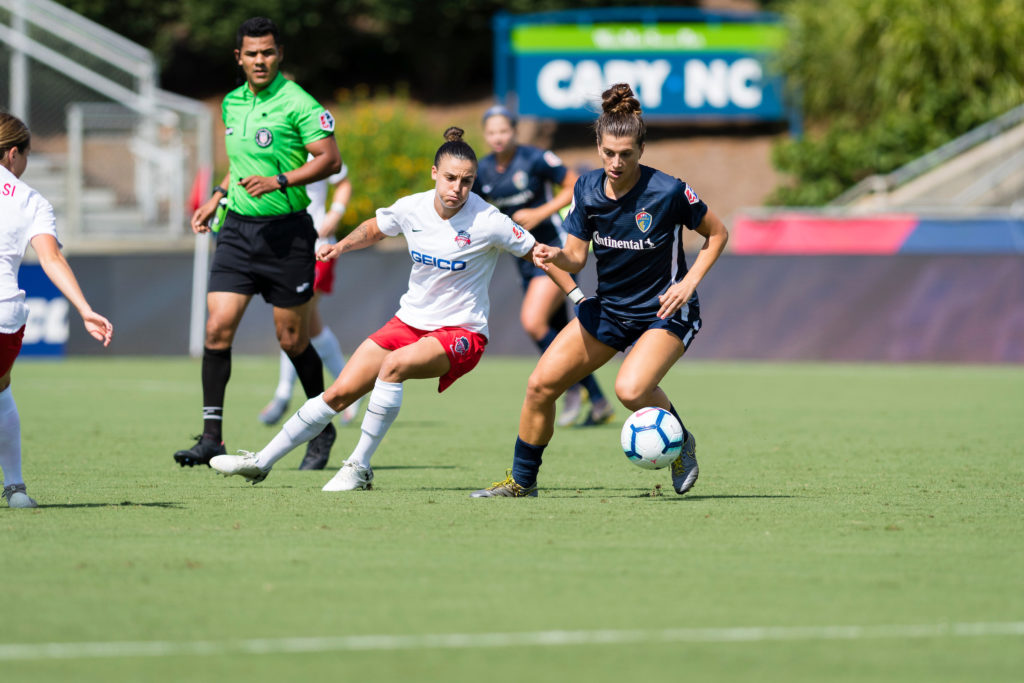 One beautiful goal for @TheNCCourage.

The win put North Carolina back atop the National Women’s Soccer League, one point clear of the Portland Thorns, who settled for a draw later on Saturday night.

The match was played a day later than expected after the match was postponed on Friday due to continuous thunderstorms in the area.

Meanwhile, Aubrey Bledsoe made four saves for the Spirit. Washington played most of the match down a player after Paige Nielsen was sent off in the 24th minute.

Brooke Elby jumped up and down, then spread her arms open to receive a hug from her teammates. Players like Elby don’t score all the time. They don’t start either. And, Elby didn’t start against the Utah Royals FC on Saturday night. However, she did enter the match in the 78th minute. Only seven minutes later, she found the back of the net, scoring the game-winning goal against Utah in a 2-0 final.

Elby’s goal wasn’t the only head-turning shot in the Windy City. Sam Kerr got Chicago rolling early, scoring in the 5th minute. Casey Short assisted her shot. Both players made the NWSL Team of the Month. Kerr’s goal is her 12th of the season, as she’s running away with the NWSL Golden Boot for the second season in a row.

For Laura Harvey’s side, chances were plentiful.

Utah finished the match with 15 shots, with two registering on goal. However, the crossbar was the enemy of the Royals, specifically Gunny Jonsdottir.

With the victory, Chicago bounces up to third place. Meanwhile, for the Royals have slipped down to seventh place.

Sky Blue FC eked out a point on the road late on Saturday in a 1-1 draw with Portland Thorns FC. Imani Dorsey’s 69th-minute goal helped the last-place visitors play spoilers, preventing the Thorns from reclaiming the top spot in the league after North Carolina won earlier on Saturday.

Dorsey’s goal came as moments after Sky Blue hit the post for the would-be equalizer. This time, Elizabeth Eddy sent a low cross toward the back post and Dorsey’s shot was perfectly placed to send the ball back toward the far corner.

.@SkyBlueFC hit the post and then moments later @Imdorsey96 slotted the ball home to level the score.

Christine Sinclair gave the Thorns the lead from the penalty spot in the 39th minute. Haylet Raso earned the penalty kick, which was probably overdue for the Thorns after Midge Purce was twice taken down in the box without a call.

Portland pressed for the winning goal late, but a combination of Sky Blue goalkeeper Kailen Sheridan and the goal frame denied the Thorns.

Still not sure how @ThornsFC didn't find a goal in this sequence.

Amandine Pierre-Louis who entered the match in the 71st minute, was sent off in stoppage time for a second yellow card.

NWSL Friday: Reign get back on track against struggling Dash
The Equalizer Podcast, Episode 71: Outside the Window