The Lowdown: The NWSL table is starting to split 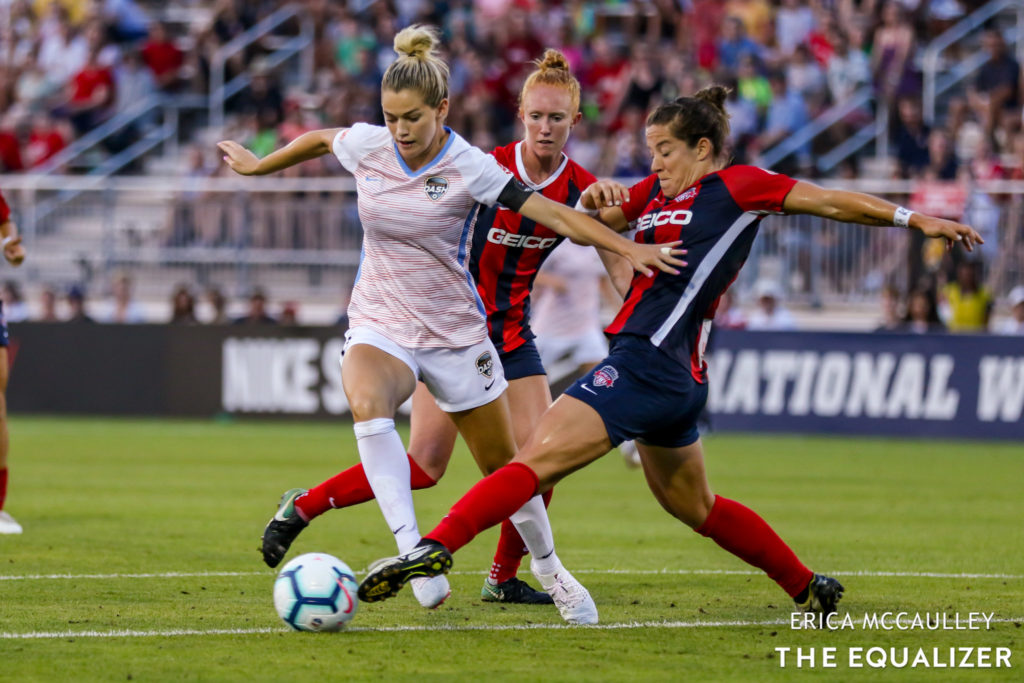 The National Women’s Soccer League table is finally starting to show signs of splitting. After a chaotic spring that saw seven teams mashed together like never before, the Portland Thorns and North Carolina Courage have begun to separate themselves at the top — again.

Meanwhile, on the bottom end, the Houston Dash and Utah Royals each turned in Week 15 performances that make them both seem like long shots to climb back into the top four, even if the math isn’t quite out of hand yet.

Let’s start in the Wasatch Valley, where the Royals have played 13 matches, conceded 12 times, yet still find themselves in seventh place with a .500 record. Yet, the talking point off their home loss to the Courage was not about their lack of scoring but about the goals they conceded.

“You can’t give two goals away every game. You can’t do that. This league doesn’t allow you to do that and win games.

That sounds odd coming from a coach whose team has a goals against average south of 1.00. But it doesn’t take a deep dive into the Courage goals from Saturday night to see the Royals are in trouble defensively. The game-winner, in particular, was perhaps the worst goal a Laura Harvey team has allowed since the overmatched 2013 Reign side.

The play began with a Royals throw-in — yes a Royals throw-in — that was turned over almost immediately when Debinha challenged Christen Press. Three touches later, Jaelene Hinkle threaded a probing ball up the left side. Royals right back Katie Bowen had taken the throw and was not close to recovered, which left center back Rachel Corsie to battle with Kristen Hamilton. Here is a look at Corsie with a positional advantage on the play while the positioning of goalkeeper, Nicole Barnhart, makes it clear the ball is in transition. 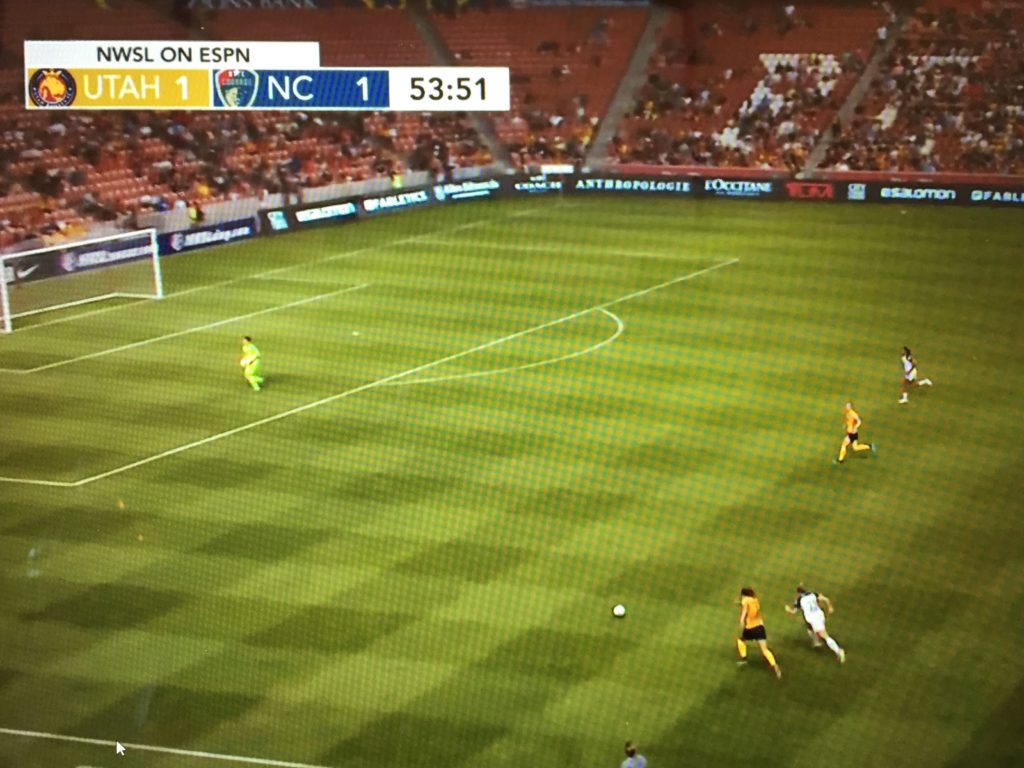 Even in the still shot, it is obvious that Hamilton is moving in on Corsie, but here is what it looked like literally two seconds later. Hamilton has beaten Corsie who elected to go to ground despite little help between her and goal. Hamilton was able to keep her feet and from there was able to play a cross into Jess McDonald. 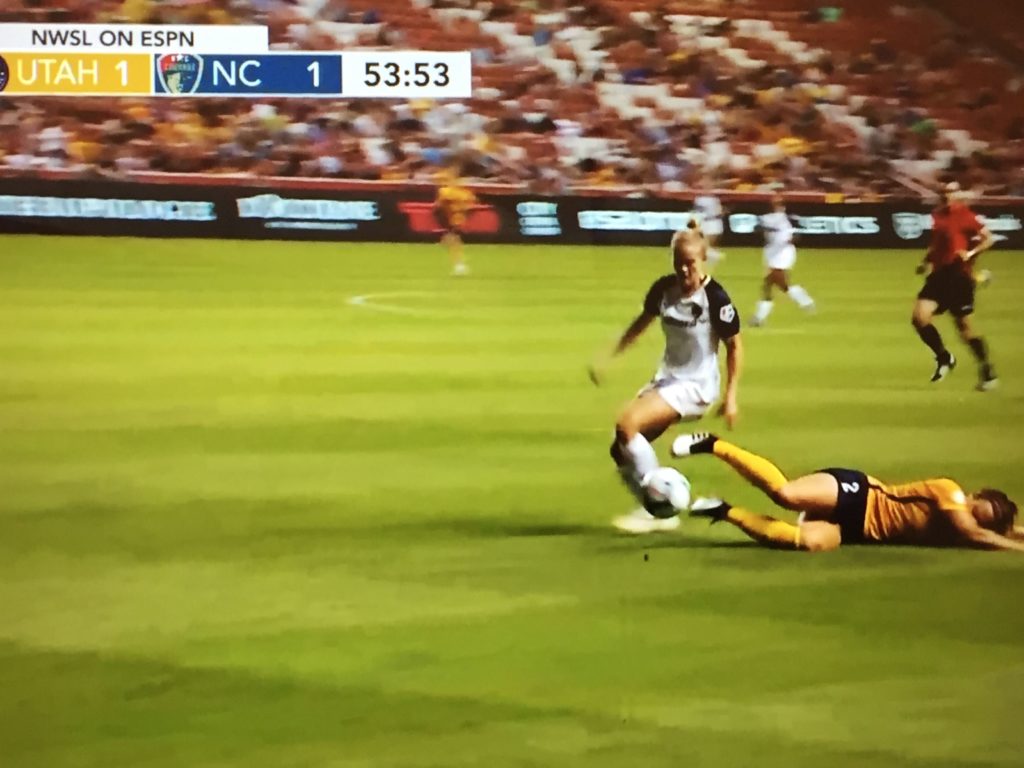 The Royals’ woes did not end there, though. Hamilton’s cross was not a good one. McDonald had to reach behind to corral it and get it settled. Still there was not enough in the way of defense to keep her from getting the shot she wanted and score what turned out to be the game-winning goal.

Earlier in the season, the Royals defense was aces. They were the reason the club was able to get out of the gate 3-1-1 despite scoring exactly one goal in all five of those affairs. They even had rookie Michelle Maemone playing outside back in the early stages and were still able to lock down opposing offenses. Were they overachieving? Are they regressing to the mean? Or are they a tired defense having played with a multi-goal lead for a grand total of one minute the entire season?

There also could be personal slumps. Corsie was also partially culpable on the first Courage goal on Saturday, and Becky Sauerbrunn has had a long run of soccer that made her a World Cup champion again but that may be taking its toll. Even in midfield, Harvey has adjusted her thinking on Gunnhildur Jonsdottir, who is no longer an automatic 90-minute player.

Sloppy goals aside, though, the bigger red flag in Utah is an inability to score, and the continued lack of any kind of magical connection between Press and Amy Rodriguez. Press was tremendous for stretches against North Carolina, but rare is the time they are both involved in the same attack. Whereas the Thorns were able to catch lightning in a bottle with the chemistry between Midge Purce and undrafted free agent Simone Charley, the Royals have yet to benefit from any moments of telepathy between Press and Rodriguez—even though they were World Cup teammates, and even though Vero Boquete has been a great source of service out of the midfield.

Over in Houston, the Dash did well to rebound and defeat Sky Blue on Sunday, but Wednesday’s loss in Portland was one they will not fondly remember. There is no shame in losing away to the Thorns, but to go behind 4-0 in 23 minutes — officially four goals in 16 minutes — is not a recipe for climbing the table. Jeff Kassouf recently pointed out that FC Kansas City won the NWSL Championship in 2014 despite a 7-1 loss — in Portland — along the way. But that team was more established and quite frankly, better.

Not all blowouts are created equal

The Dash are staring at six years in a row without a playoff appearance and they did not capitalize on a World Cup break during which they were supposed to be one of the better clubs. Meanwhile, Sofia Huerta’s breakthrough season has yet to materialize and the defensive what-ifs for rookie coach James Clarkson have yielded mostly the wrong answers.

That’s a good start, and an attitude that should win points with the players. Clarkson is also an inexperienced coach as far as running a professional team week over week. So, a tactical faux pas was bound to happen once. And if we’re being honest, coaches with more experience and louder resumes make blunders all the time.

The Dash are ahead of the Royals after beating Sky Blue on the weekend, but some of the math works against them. They have already played 15 games compared to 13 for the Reign and Spirit — the two teams directly ahead of them. The Royals have also played only 13 times. That means points are at more of a premium for the Dash, and in six NWSL seasons the club has yet to punch above its weight nearly often enough to actually move into the upper echelon.

Speaking of the Reign and Spirit, the Reign are dealing with an extraordinary number of injuries. The Spirit youth movement has hit a bit of a wall. The opportunities should be there for the Royals and Dash. But both teams needs to improve, and they need to improve soon.

— Jill Ellis’ coaching accomplishments with the U.S. speak for themselves. My colleague John Halloran had some poignant Tweets about what it was like to cover Ellis.

I agree with John’s overall conclusion. There were times it seemed like the team was in disarray and Ellis would talk about how well they played, and it would be baffling. However, she was never one to coach through the media and over the years I came to respect her for that. She claims to never read anything about herself or the team, but in the event she is breaking that embargo now that she’s heading out the door — Jill, it has been a pleasure.

— As for who replaces Ellis, it’s anyone’s best guess but here’s my column on what that person will need to do right away to succeed. With Tony Gustavsson also gone from the team and a new general manager coming in, it really could be anybody.

— Sam Kerr now has 70 NWSL goals. Take a deep breath and re-read that.

— Sky Blue appear closer than ever to actually moving at least one game to Red Bull Arena. Stay tuned.

— On the field, Sky Blue had an uptick with consecutive wins following the dismissal of Denise Reddy. They have lost two straight since. But they need — I repeat need — to get Imani Dorsey more time on the ball. She plays wide, so service matters more than a central player, but they are too dangerous when Dorsey has the ball at her feet for it to be happening as rarely as it does.