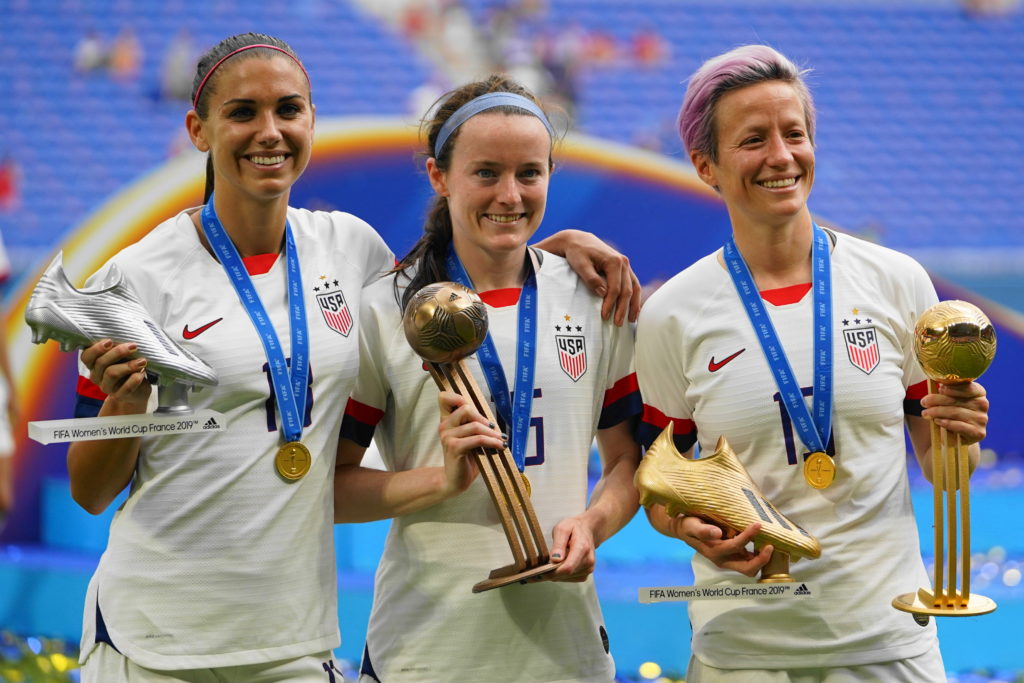 U.S. players Megan Rapinoe, Alex Morgan, Rose Lavelle and Julie Ertz, who raised the FIFA Women’s World Cup trophy together in France a few weeks ago, are all nominated. Rapinoe picked up the Golden Boot and Golden Ball, while Morgan picked up the Silver Boot. Meanwhile, Lavelle was awarded the Bronze Ball and scored the game-winning goal against the Netherlands. All four players feature in the National Women’s Soccer League, too.

Joining them on the list is another NWSL player: Sam Kerr. The Australian international scored five goals while wearing the captain’s armband at the World Cup. Australia fell out of the tournament in the Round of 16, losing to Norway on penalty kicks. However, Kerr shines even more at the club level. She won the NWSL Golden Boot last year and is leading the race this season, having scored 11 goals in 11 matches.

Other nominees include Lyon striker Ada Hegerberg, who chose to sit out of this summer’s World Cup. Her club teammate, Wendie Renard, also received a nomination, along with her club and French teammate Amandine Henry. Another Norway international, Caroline Graham Hansen, made the list, too.

Vivianne Miedema, who became the all-time leading scorer in Dutch soccer history, men’s or women’s, at the World Cup, received a nomination. The newly turned 23-year-old joined Arsenal in 2017.

From England, Lucy Bronze and Ellen White made the nomination list. White scored six goals at the World Cup, tying Rapinoe and Morgan. She was awarded the Bronze Boot, due to having zero assists. Meanwhile, Bronze was awarded the Silver Ball as second-best player of the tournament.

FIFA’s biggest annual awards recognize the best male and female players, goalkeepers and coaches throughout the world. On Wednesday, nominees were announced for player and coach of the year. The winners will be announced on Sept. 23 in Milan. Criteria considered for the awards takes into account achievements for club and country from May 25, 2018 through July 7, 2019.

To vote for The Best Female Player of the Year, click here.

Ellis is leaving the national team with some hardware, and might add to it in September. She is the only two-time winning Women’a World Cup coach and she also won the FIFA World Women’s Coach of the Year in 2015.

However, Ellis has some stiff competition. After qualifying for the World Cup and making it to the round of 16 in 2015, the Netherlands made a huge leap to the final match, in just their second-ever World Cup appearance. Sarina Wiegman wasn’t around in 2015, but she did lead the Dutch to a Euro Championship title in 2017 and guided the team through World Cup qualifying. At the tournament, she faced off with plenty of skilled international coaches, but then came head-to-head with Ellis in the final.

There’s also another United States connection; North Carolina Courage head coach Paul Riley was nominated for the honor. There’s no secret to what Riley has done with the Courage. In just the club’s first year in existence, Riley guided the team to the NWSL Championship. Although they fell to the Portland Thorns, the Courage bounced back the next year and ran away with the league. Throughout the entire 2018 regular season, North Carolina only lost one match and went on to win the league title. The Courage also won the first-ever Women’s International Champion’s Cup against Lyon.

To vote for The Best Coach of the Year, click here.

Jill Ellis made one thing clear: She just wants to coach. So, what’s next?
Three things Jill Ellis’ successor must immediately get right