Jill Ellis is stepping down as USWNT coach 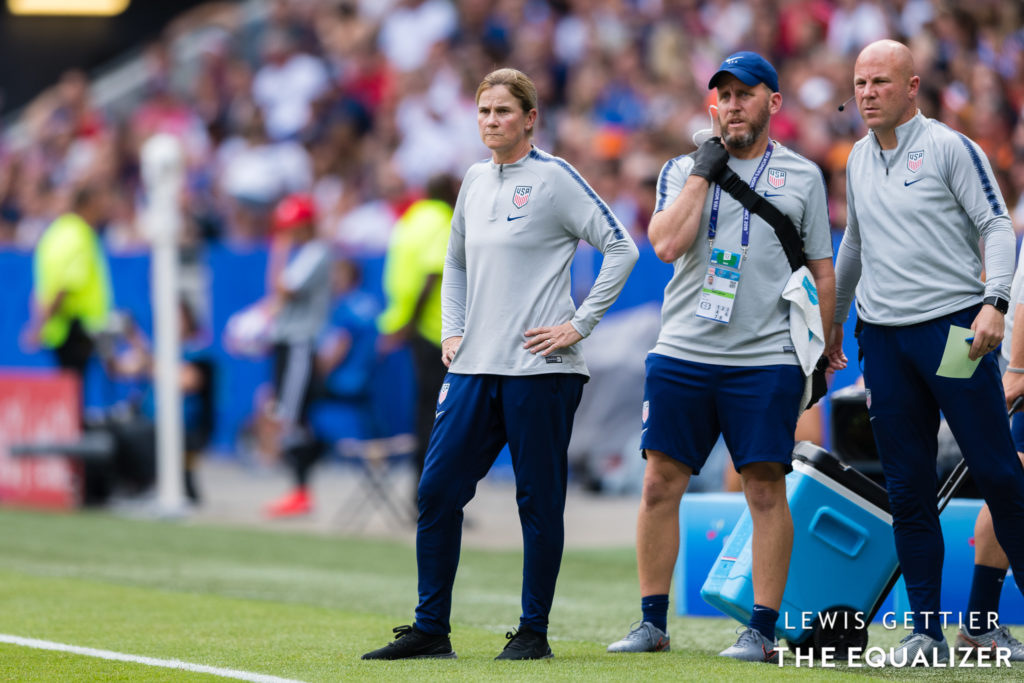 Jill Ellis is stepping down as coach of the United States women’s national team, U.S. Soccer confirmed on Tuesday, confirming The Equalizer‘s initial report. She will remain with the team for its five-game World Cup victory tour, which kicks off on Saturday at the Rose Bowl in Pasadena, California, against Ireland, before becoming an “ambassador” and representing the federation in various capacities.

The 52-year-old Ellis coached the U.S. to back-to-back World Cup titles, in 2015 and 2019, becoming the first woman to achieve the feat. Vittorio Pozzo, the only other coach to win consecutive World Cups, did so while in charge of Italy’s men’s national team for the 1934 and 1938 tournaments.

Ellis’ current contract expires on Wednesday. There was a mutual option to extend the contract through the 2020 Olympics. The decision to step down was Ellis’, according to those familiar with the situation. Ellis has coached more games (127) than any manager in program history. Her 102 victories (102-7-18 record) rank second only to Tony DiCicco in in U.S. women’s national team history.

Ellis said on a conference call on Tuesday that she began thinking about stepping down after the World Cup as early as December 2018. “There was a multitude of things that kind of came into play, first and foremost being my family,” she said. Ellis added that the timing was right to allow a new coach to have a world event — the 2020 Olympics — to build off of for the next World Cup. This was the plan for a long time, it seems.

“When I accepted the head coaching position this was the time frame I envisioned,” Ellis said in a statement. “The timing is right to move on and the program is positioned to remain at the pinnacle of women’s soccer. Change is something I have always embraced in my life and for me and my family this is the right moment.”

Who will be the next coach of the U.S. women’s national team is yet unclear. The new general manager of the team will have hiring and firing power over the head coach. That GM – a new role which was announced last year and was initially supposed to be filled in early 2019 – is expected to be named soon, with sources saying that the person for the role has already been selected. U.S. Soccer said on Tuesday that the GM hire “is imminent.” Ellis will not be the next general manager, per sources familiar with the process.

Asked about her expiring contract in the moments after the U.S.’ World Cup victory in Lyon on July 7, Ellis deflected. “Dude, you know more than I do, I’m not going to lie,” she interjected, before continuing:

“I can’t even think about that right now. Right now, it’s just about enjoying this moment. I said to the players in the pregame that we have to take this game one minute, one moment, one decision at a time and I kind of live by that. I don’t think about anything else than what’s in front of me, so I think, for me right now, I’m just going to soak all this in, and enjoy it and celebrate with my players.”

Longtime U.S. assistant coach Tony Gustavsson, who was a finalist for the job when Ellis took over in 2014, has already departed the team.

The U.S. will also play Portugal on August 29 in Philadelphia and on Sept. 3 in St. Paul, Minnesota before rounding out the victory tour with a pair of games in early October. Friendly matches in November could be the first in charge for the next U.S. coach.

The Tokyo 2020 Summer Olympics begin in less than a year. The Americans, who still need to qualify, are aiming to become the first women’s team to win the World Cup and Olympics in consecutive years. They were eliminated by Sweden in penalty kicks of the Rio 2016 quarterfinals. Ellis had taken some risks with her 18-player Olympic roster – including bringing Megan Rapinoe, the 2019 Golden Ball and Golden Boot winner, who did not play a competitive minute in 2016 before the Olympics.

That Olympic failure prompted a major roster overhaul which saw Ellis try different systems – including the infamous three-back – as well as, eventually, 60 different players called up between the 2016 Olympics and 2019 World Cup. Such drastic turnover caused some unrest and a reported player revolt in the summer of 2017, but Ellis received the backing of then U.S. Soccer president Sunil Gulati.

“I can truly say this: I don’t care about – and I never really read – what people thought,” Ellis said after her team defeated Netherlands, 2-0 in the 2019 World Cup final. “I knew that after 2016, we had to kind of deconstruct this and reconstruct this. That was the plan and that was what I shared with my bosses – and they bought into it.

“So, I think in terms of – I just knew we had to continue to evolve and be able to do more things in terms of how we play, because the game is growing so fast. Going through the process of strengthening our squad, deeper player selection, giving people opportunities, vetting people; that was hard. But I think that was ultimately the right decisions. But to get to this point and to see the validation in that and the trust you have with the players that kind of came through that, it speaks for itself. I don’t need to talk about critics; I don’t really care. I kind of do my thing. What I always say is, people out there know one-tenth of what we do, so for me, [I’m] just incredibly proud of these players.”

Ellis initially took over as interim head coach in April 2014, after Tom Sermanni was fired. She was appointed the team’s permanent head coach on May 16, 2014, and the following year guided the U.S. to its first World Cup title in 16 years.

USSF president Cordeiro breaks silence on equal pay lawsuit
Jill Ellis made one thing clear: She just wants to coach. So, what’s next?