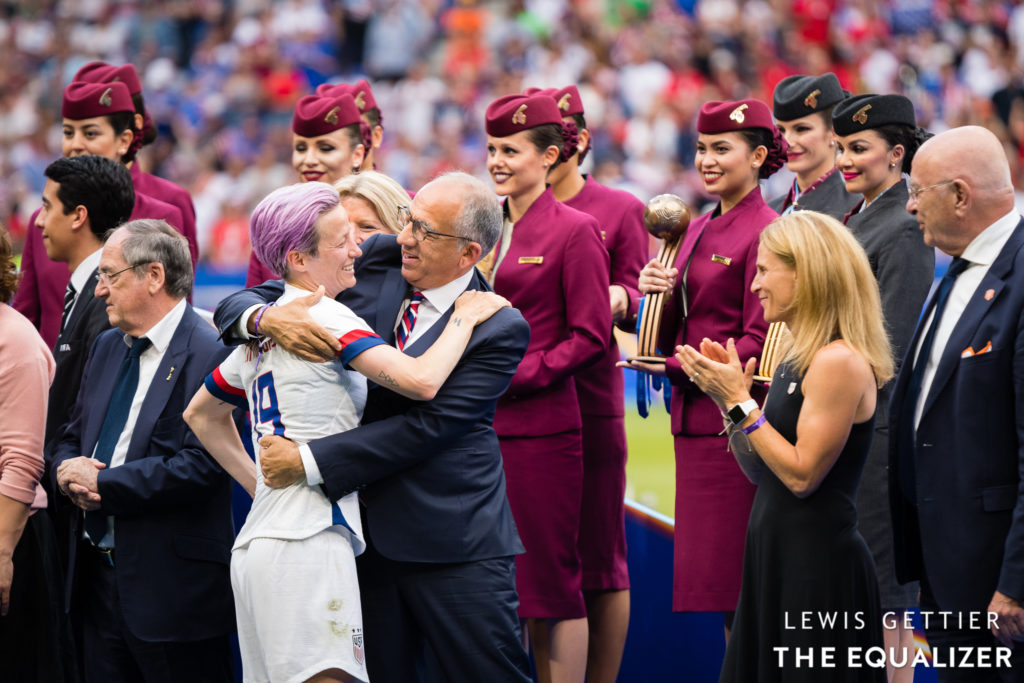 The numbers released by U.S. Soccer say that from 2010 through 2018, “U.S. Soccer paid our women $34.1 million in salaries and game bonuses and we paid our men $26.4 million. Within an hour of the letter’s public release, a statement from a U.S. Women’s National Team Players Association spokesperson soundly rejected the claims. “The USSF fact sheet is not a clarification,” she wrote. “It is a ruse.”

The two sides last month agreed to mediation over the gender discrimination lawsuit that 28 players filed in a Los Angeles district court in March, but the federation mostly avoided discussing the lawsuit during the World Cup, which the U.S. won on July 7. Cordeiro alluded to the topic at the team’s victory celebration in New York City on July 10 as much of his speech was drown out by “equal pay!” chants from the assembled crowd. Mediation was seen as a step toward a possible resolution. The reality, however, was and is that there’s a long way to go to get anywhere near that.

Cordeiro reiterated in his letter on Monday that the federation believes its women’s players “deserve fair and equitable pay.” Cordeiro and his predecessor, Sunil Gulati, have frequently used the term “equitable” rather than “equal” when discussing the topic. Cordeiro says in his letter that “the team’s lawsuit has also contributed to an important and necessary national discussion about equality. That is a conversation that U.S. Soccer welcomes.”

He also makes a point to note how the men’s and women’s national teams are “different,” using that word 10 times in the letter’s third paragraph before reiterating: “Yet even with these many differences, U.S. Soccer strives to ensure that all our national team players, women and men, are paid fairly and equitably.”

My letter and fact sheet to our soccer community about the @USWNT lawsuit. We’re committed to doing right by our women’s players, and I’m optimistic we can get this done. https://t.co/5bzV4KRFdm (1/2) pic.twitter.com/GYYnPH1Z7c

U.S. Soccer notes that the women — 22 of them in 2019 — are paid guaranteed salaries of $100,000 per year, plus $67,500-$72,500 for participation in the National Women’s Soccer League. Women’s players also receive health benefits and retirement packages. U.S. men’s players are paid per appearance; men make most of their money with and are contracted by their clubs. U.S. Soccer has paid for the NWSL salaries of contracted players since the league began in 2013, but those payments are for participation in the league, not with the national team directly — a complex, but important layer to the argument, particularly as U.S. Soccer points to $18 million in investment in the NWSL since its inception in late 2012.

The Equalizer reported earlier in July that U.S. Soccer is expected to end its management agreement with the NWSL when the current deal runs out, at the end of 2019. A U.S. Soccer spokesperson said that the federation won’t stop investing in the league, but day-to-day management would be turned over to team owners.

In Monday’s letter, Cordeiro also pointed to investments in the women’s youth national team programs, claiming near-equal investments on the men’s and women’s sides. He also said that from 2009 to 2019, women’s national team games generated a net loss of $27.5 million, claiming that the average gross revenue of men’s national team is nearly double that of women’s games. His letter also specifically addresses “stakeholders, sponsors and partners” as public pressure on the federation increases. Luna Bar and Secret Deodorant — the latter of which is a federation sponsor — pledged payments to the 23 U.S. World Cup players to bridge the pay gap.

The USWNTPA’s response noted that bonuses are different for the men and women for the same achievements (winning the World Cup, for example, which the U.S. women did in 2015 and 2019).

“The numbers USSF uses are utterly false which, among other things, inappropriately include the NWSL salaries of the players to inflate the women’s players compensation,” the USWNTPA’s statement reads. “Any apples to apples comparison shows that the men earn far more than the women. The fact is the women’s team requested the same compensation structure as the men have, so they would be paid equally for equal performance. USSF refused, offering lower compensation in every category for the women’s team in a pay for performance structure. That is patently unequal pay.”

The U.S. Men’s National Team also replied. In a statement, the USMNT said that the USWNT players “deserve equal pay and are right to pursue a legal remedy from the courts or Congress. Their full statement is listed below.

The Equalizer Podcast, Episode 70: Blowouts and that World Cup bump
Jill Ellis is stepping down as USWNT coach