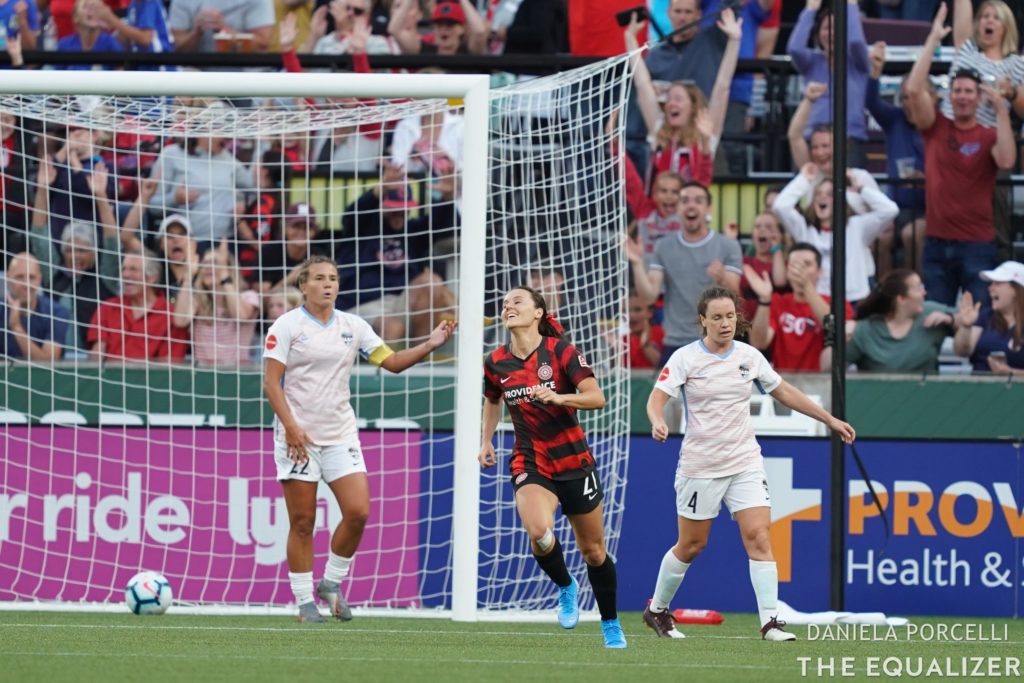 On Wednesday, in Portland’s first home game with all those players back from France – notably the four Americans who lifted the World Cup trophy earlier this month – the Thorns put on a first-half clinic more reminiscent of a summer friendly match between two teams on vastly different levels.

Portland’s 5-0 win over the Houston Dash certainly involved an abundance of sub-par defending and execution from the visitors. The Thorns’ opening goal was the product of Houston trying to play out of the back – valiant against this Thorns team, in this Portland environment – before Sofia Huerta turned the ball over inside their defensive third. Gaby Seiler pounced, Tobin Heath dribbled and Lindsey Horan finished for the first of four Thorns goals in the opening 23 minutes. It was an absolute rout before halftime.

Among the myriad of mismatches, the Thorns’ superiority on the flanks was as clear as it was predictable. Thorns wingback Meghan Klingenberg entered the match in a five-way tie for the league lead in assists, with four. Heath is back to commanding the higher portions of that left flank for Portland, and the combination of those realities was a disaster for a makeshift Houston back line which saw central midfielder Haley Hanson deployed at right back, to the right of rookie center back Ally Prisock.

Portland’s second goal of the night came from that left side, with Heath dropping lower to draw Hanson out. With Hanson pulled high and disconnected from Prisock, Heath received a line-breaking entry pass from Emily Menges and played a one-touch ball to Klingenberg before spinning off to race down the line. Hanson gets caught between minds, Sophie Schmidt gets caught ball-watching and lets Heath run free, and Klingenberg delivers a through ball with exactly the right weight. Heath’s probing cross is the icing on the cake.

Can't leave @HayleyRaso unmarked at the back post, she'll make ya pay.

The Thorns’ fourth goal – and Raso’s second – once again comes from Klingenberg and Heath combining on the left. The play starts inside Portland’s own box and requires just six passes to go the length of the field for Raso’s finish. Each step of the way, a Dash defender is late to recognize where pressure needs to be applied, providing Thorns attackers time and space to play up the pitch.

Heath once again draws Hanson out, and Purce runs in behind Amber Brooks, on Brooks’ blind side, to connect with Heath’s through ball. Purce shows great vision to find Raso for a fourth goal in the opening 23 minutes.

For as many great saves as Campbell made on the night, she was indecisive on both of Raso’s goals, on top of being credited with an own goal.

As if Heath and Klingenberg weren’t enough for the Dash to handle on Portland’s left side, Horan – as she often does – frequently drifted to the left to combine with the pair. Her one-touch pass deep in Portland’s defensive third, on that fourth goal, is what breaks pressure and allows the Thorns to quickly advance up field (see video above). 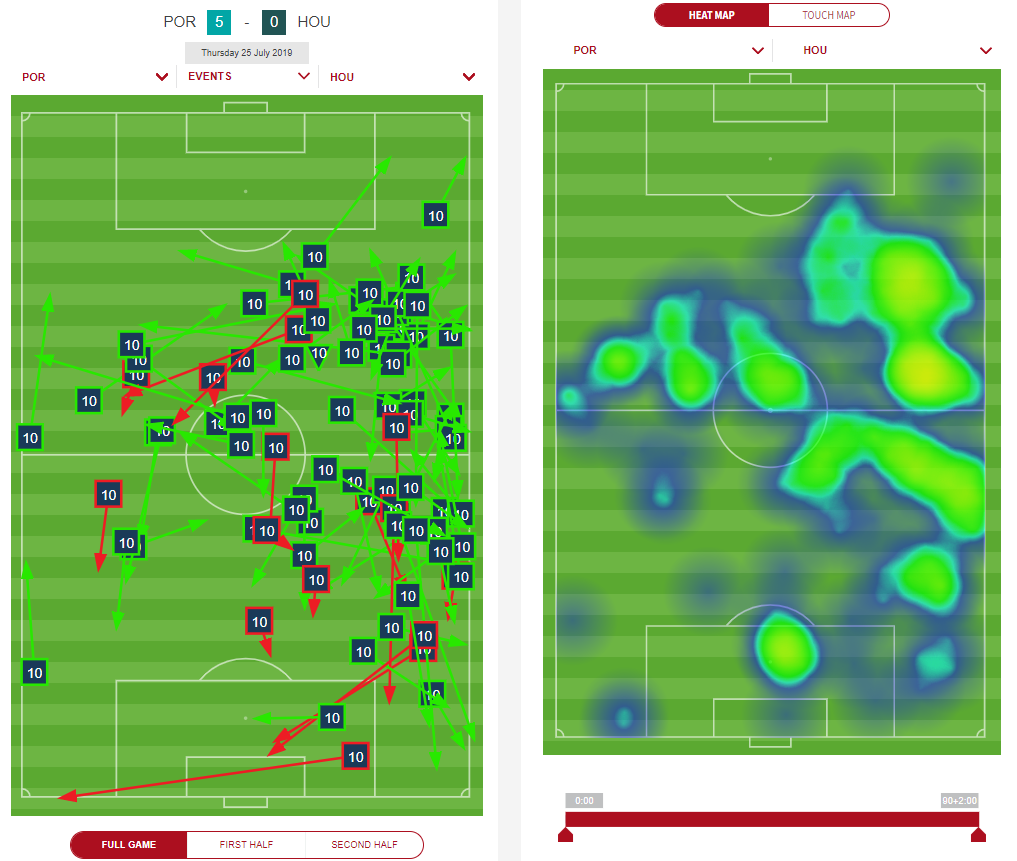 Hanson was hardly the Thorns’ only target. Purce drifted wide from her central starting point to expose Brooks on the Thorns’ right side and earn the penalty kick which led to the third goal. Raso similarly enjoyed the match-up against Brooks and Houston left back Allysha Chapman.

Houston coach James Clarkson obviously felt that this was hist best possible lineup to deal with a clearly superior Portland team. Hindsight is 20/20, but it was quickly clear — even to Clarkson, who made a double change in midfield at the half-hour mark, bringing on Kealia Ohai and Cecelia Kizer for Christine Nairn and Kyah Simon — that this wasn’t the case. Heath might be the best winger in the world, and Klingenberg’s success on the flank has been a constant even as Portland coach Mark Parsons tinkers his formation with rotating personnel. The 4-2-3-1 did wonders for Portland on Wednesday.

Perhaps Clarkson’s better move might have been to sacrifice attacking opportunities and drop Huerta into the right back role, where she played for Chicago (and thought she would be playing for Houston). It’s unlikely that any solution of Cami Privett off the bench or Sophie Schmidt – who has filled in at center back for club and country – would have done much better to deal with the pace of Purce and the threat of Heath cutting inside than Prisock. But combined with Huerta in a more natural role at fullback (at least more natural than Hanson), it might have mitigated the damage.

Instead, Portland ran rampant on the flanks, and the Thorns sit four points clear atop the table heading into the weekend. 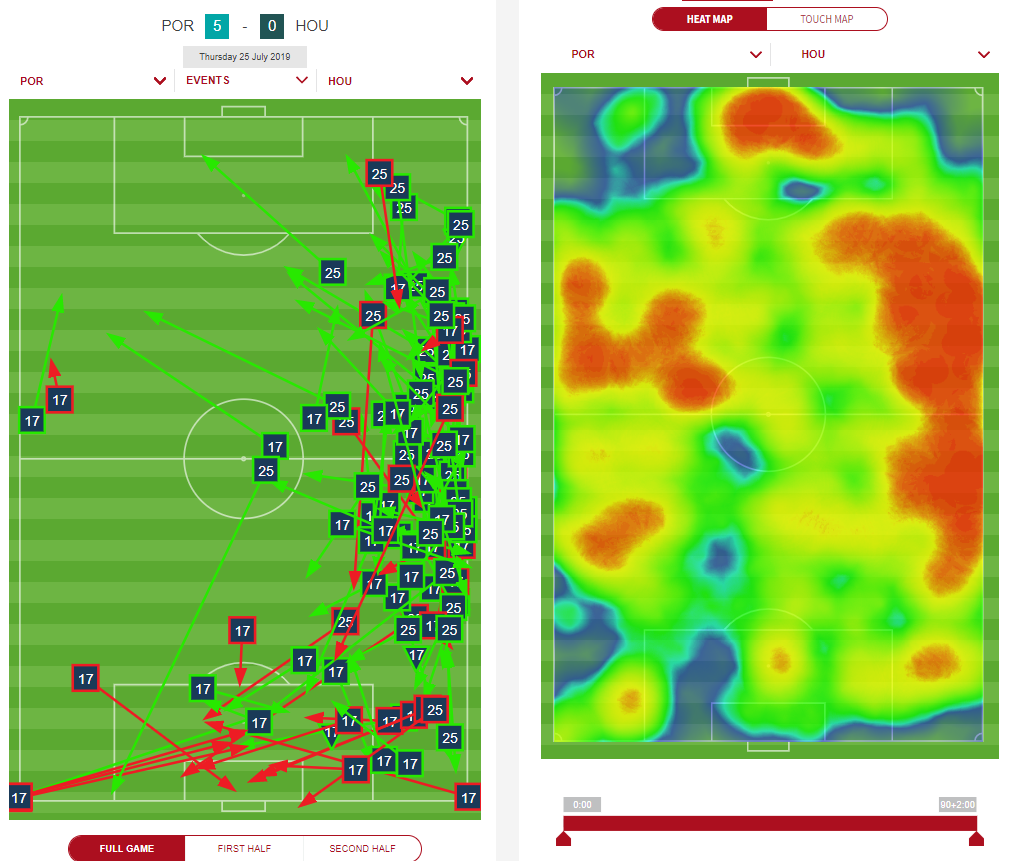