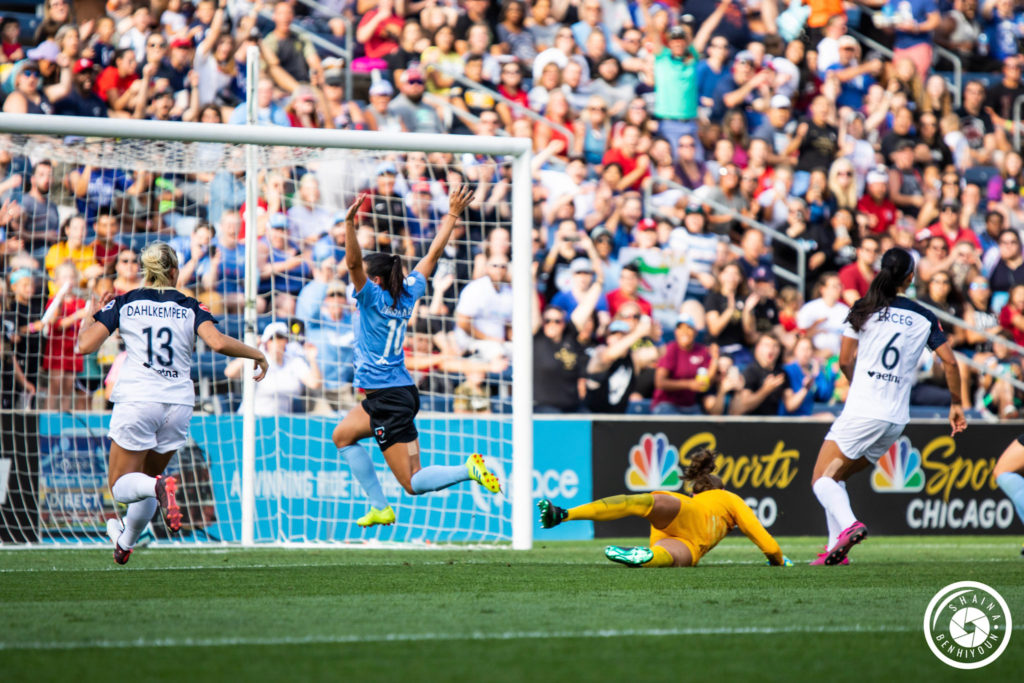 As the big summer tournament has come and gone, discussion has raged as to the legitimacy of the World Cup Bump, the nebulous wave of support that comes from heightened awareness of women’s soccer and provides opportunities for clubs in the National Women’s Soccer League.

Views on the significance of this moment differ. The NWSL has only existed for two World Cup cycles, so the existence of the bump is largely hypothetical. The open question in 2019 was whether the U.S. Women’s National Team players might have a different impact on the market after their second consecutive World Cup victory.

As it turns out, since the return of the USWNT players to the league, every club has seen an increase in attendance. Utah drew 15,931 on Friday night, and the Washington Spirit had a sellout of 5,550, as did Sky Blue FC at 5,003. Just last night, the Portland Thorns broke their own attendance record by drawing 22,329 people for the club’s thumping of the Houston Dash in a midweek match. Even more than we could have predicted, the growth in awareness of the league is astounding.

But perhaps the most impressive rise during this period was achieved by the Chicago Red Stars, who drew 17,388 fans to their July 21 match against the Courage — a massive increase over the 2,374 who attended their previous home game. For an independent club whose average had been hovering around that second number, that’s a huge accomplishment.

Not unlike a number of other NWSL clubs, the Red Stars are working against weather and location issues to bring crowds into Bridgeview. But the monumental increase, and the success of the big USWNT return, came as a function of the club’s philosophy, and the Red Stars are determined to make the World Cup bump last. The front office holds the belief that getting fans through the door in this period of time is the key to holding onto them as fans in the future.

That meant going all in on one big game.

All hands on deck

“About two and a half months ago, we sat down as an entire organization. Sales, marketing, video, sponsorships, community relations, just to go over what we thought was doable and circling this game.” Justyne Freud, the Red Stars’ director of communications and marketing, told The Equalizer.

In order to have enough time to plan, the club made a best-case scenario guess for the U.S. Women’s National Team return, as if all went well they’d be returning after winning the World Cup Final on July 7.

“Landing North Carolina, landing the first game back for our U.S. players hopefully, sitting down and just hoping and wishing that this was the game that if we were to get 10,000 through — how that changes the trajectory of the entire season and hopefully the entire next two to three seasons. We decided on the number, and the next step was just how do we do it.”

“You see in this culture in America, and especially in Chicago. If you don’t win, they won’t come.”

In order to get the USWNT return match to hit, the Red Stars knew that they had to continue to work with clubs and youth groups — the bread and butter fans who have supported the Red Stars for years — but that if they were going to max out attendance they were also going to have to expand in scope, and that required all hands on deck.

The club developed a match-specific promotion — $7 tickets — and sent it out to young adults (ages 21-30), through adult recreational leagues and soccer watch parties. The Red Stars also printed somewhere around 25,000 flyers in-house, to be passed around the Chicagoland area for weeks.

The club sent out street teams, always containing one to two full-time staff members, passing flyers out at rib fests in the area. They also flyered Wrigley Field after Cubs games, with the idea that if they could capture even just 2% of the midwest fans tuning in to World Cup games, they could pull an astronomical number.

While helping host semi-final and final watch parties in partnership with U.S. Soccer, Chicago also made sure to have materials at watch parties throughout the whole tournament in suburbs like Naperville, Evanston, and Winnetka, as well as a number of bars in Chicago itself. The focus on proliferation of those kinds of physical materials enabled the club to reach further than their limited manpower for a longer period of time, and got the branding in front of as many soccer-sympathetic eyeballs as possible.

That kind of punching above their weight also extended to the digital realm. The Red Stars ran regional television ads on FOX World Cup pre-shows and worked with the FOX digital team to have geo-targeted digital ads on the FOX World Cup homepage. The specificity of digital marketing to a potential audience, with the ability to track resonance, was incredibly important to allowing the Red Stars to use their resources wisely. One particular platform that has paid dividends for the club is Facebook.

“I think that’s the one thing maybe NWSL teams besides ourselves I haven’t seen (…) I think we have the ability to control the budget, who you’re targeting, and I think that’s the best thing for the next step for this league to really take place is to make sure you’re retargeting all of those fans that are coming out to these games.”

“I would rather have [the marketing budget] pushing towards Facebook ads than a billboard. You don’t know what you’re getting out of that.”

The philosophy of specific, regionalized marketing work reflects how the Red Stars see themselves as part of the larger conversation about women’s soccer, and how the mandate is on individual clubs to capture their own key demographics without outside help. Larger league-wide progress like the ESPN TV deal (Sunday’s match was broadcast to an average of 149,000 people on ESPN2), and Budweiser’s multi-year sponsorship have provided a boost to what the clubs need to bring people in, but getting fans through the turnstiles has to be a local endeavor.

And while Sunday’s homecoming was a great success, the team understands the importance of keeping fans happy and coming back, even when competing with the U.S. Women’s National Team themselves for ticket sales in the upcoming months. The NWSL’s relationship to the USWNT Victory Tour is a complicated one. Independent clubs don’t see monetary dividends from those games’ success, despite recognizing the positives of national awareness of these players, and hoping that their reputations will carry fans to their home clubs.

This is also where the Red Stars’ continued focus on local, sustainable support allows them to thrive despite the Victory Tour games. The USWNT has announced friendlies in Pasadena, Philadelphia, and St. Paul, none of which have NWSL teams, and Freud posits this as a good way to keep those markets separate.

“I think Pasadena is a perfect start because there is no NWSL team, so hopefully those people aren’t taking away from the Tacoma fans, the Portland fans, the Chicago fans, because ideally what we’d like to see is [for the USWNT to] go to these areas like Pasadena (…) but how do we full-fledged in Chicago make sure the Midwest district are coming for the Red Stars games, not just the USWNT games?”

“We don’t need a whole nation to know about the Chicago Red Stars, and that’s great that [fans] are all for the USWNT; we just need that Midwest district.”

And once the casual viewer makes it into SeatGeek to check out a match, the Red Stars front office is ready to turn them into long-time fans, an endeavor that has always first and foremost started on the pitch.

“Chicago, the United States, this culture that we’ve built, is so concentrated on winning. I think you see across the board, the Cubs before they won the World Series, the White Sox haven’t won in a while, Blackhawks didn’t make the playoffs and they have seats available [in certain sections] for the first time in over five years.”

“You see in this culture in America, and especially in Chicago. If you don’t win, they won’t come.”

The product is on the pitch

But it’s actually in the way that Chicago has built its roster over time that gives the Red Stars confidence that every person coming in is going to find something to love about all the players on the roster. They’ve seen this working in the sales of their 2019 Elevated Kit, an in-house design that has sold out three straight runs — the club has already ordered the fourth.

“You’ll see a lot of first-time buyers buying those [Julie] Ertz and [Sam] Kerr and Morgan Brian jerseys, but if you see it from a fan perspective, you see how many [Vanessa] DiBernardo and [Danny] Colaprico jerseys there are (…) I think as people continue to come back, they start to see what a DiBernardo does, and true soccer fans begin to pick up on that, so I think you resonate and you get in with the first four, and then you grow to love all 22 players on that field”

From a functional standpoint going forward, the club is using schematics to follow up with the purchasers of that $7 ticket deal, sending simple surveys out for feedback on how to get those fans back to SeatGeek for at least one more game, and are brainstorming on the best ways to make that happen. So far the club is seeing overwhelmingly positive results from those emails, and have strategized on ways to re-advertise to the demographics they were able to hit both in direct and digital marketing for the 21st.

But ultimately, the single greatest retention advocate for the 17,000 fans that saw that match on Sunday was the actual game, where two heavy hitters went toe-to-toe and the home team got a win on two wonderful goals.

“The performance they put on obviously was the ideal situation, winning 2-1. North Carolina hit the post in the 80th minute, two huge saves from Alyssa, Sam’s goal. Vanessa, the hometown girl, scoring the first goal in front of all 17,000 people. I’m not sure I could storybook it much better.”