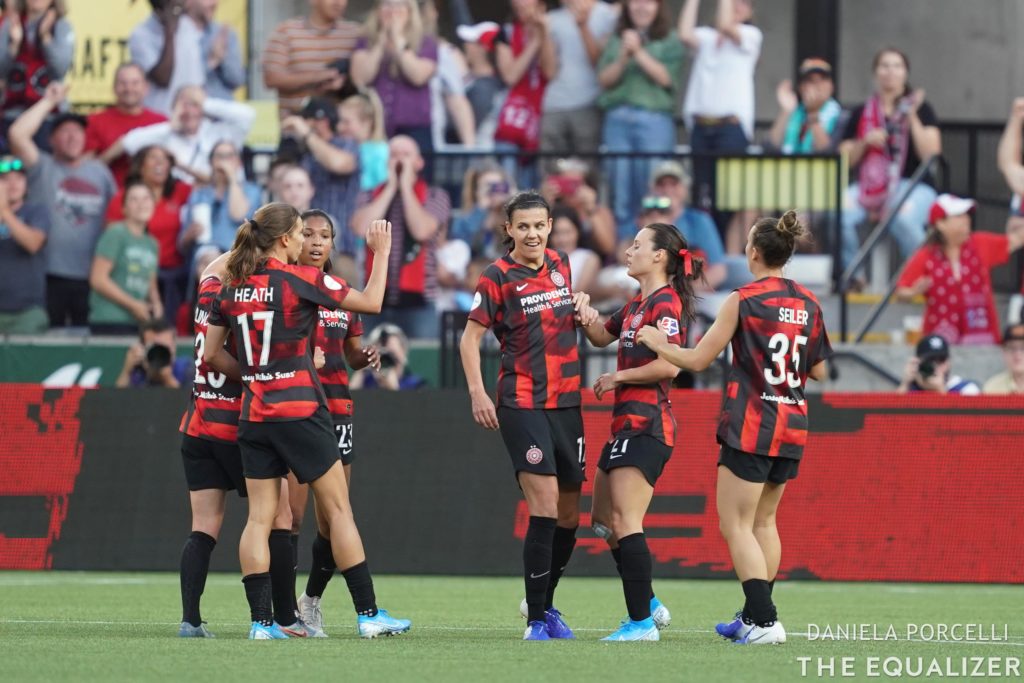 Portland Thorns FC scored four goals in the opening 23 minutes to throttle the Houston Dash, 5-0 in front of 22,329 fans — a Portland record — at Providence Park.

Lindsey Horan opened the scoring in the 7th minute after a poor giveaway in the back by Houston’s Sofia Huerta. Haley Raso doubled the home side’s lead five minutes later with an empty-net tap-in at the back post.

Can't leave @HayleyRaso unmarked at the back post, she'll make ya pay.

Christine Sinclair made it 3-0 for Portland from the penalty spot in the 18th minute. Midge Purce had turned Dash defender Amber Brooks and rounded the corner as she was taken down by Brooks on the edge of the box.

Purce would assist the fourth goal — a second for Raso — in the 23rd minute. Heath played Purce in behind and Purce, noticing that Dash goalkeeper Jane Campbell was caught out of her goal, played a square ball to Raso for the finish. The goal capped off a wonder build-up from the back by the Thorns.

Campbell made several spectacular saves on the night to prevent the score from looking worse for the Dash. None was better than her first-half save to deny Horan on an incredible bicycle attempt.

THIS GAME. @LindseyHoran went for the ? and somehow @jane_campbell1 kept it out!

Campbell would be credited with an own goal for the Thorns’ fifth and final goal in the 71st minute, when she tried to save a shot by Tyler Lussi that did not appear to be on frame.

For 53 minutes, Sky Blue FC was able to dodge the attack of the Washington Spirit. It wasn’t an easy task, either. At halftime, Washington took 12 shots, compared to three from Sky Blue FC. However, a breakaway from Ashley Hatch in the 54th minute sealed the deal, and three points, for the visiting Washington Spirit, who claimed a 1-0 victory.

Three points helps Washington, who have struggled in their last five matches. Washington is now in the leaps up to third place — for now. There’s still action in Portland tonight and then this weekend the Spirit have off, serving a bye-week. However, entering the midweek matchup against Sky Blue FC, Washington was riding a three-game losing streak.

.@ash_hatch33 finds plenty of space and doesn't make a mistake with a cool finish to give @WashSpirit the lead!

Adding Rose Lavelle and Mallory Pugh back to the squad certainly helps. Meanwhile, Sky Blue FC saw the return of Carli Lloyd, who was placed in a four-person midfield along with Raquel Rodriguez, Imani Dorsey and Paige Monaghan.

As for the Spirit, Hatch’s goal was scored on a breakaway. She beat out her defenders and then slipped the ball through goalkeeper Kailen Sheridan’s legs. Hatch was sandwiched between two defenders, but was able to keep control of the ball.

Despite the loss, the New Jersey club did boast the second-highest attendance in their club’s history. A total of 5,003 fans filled up the seats at Yurcak Stadium, which was considered a sell-out by the club.

THANK YOU FOR ALL WHO ARE IN ATTENDANCE TONIGHT AT YURCAK FIELD! #NJvWAS #NWSL pic.twitter.com/v48i4lFfUq