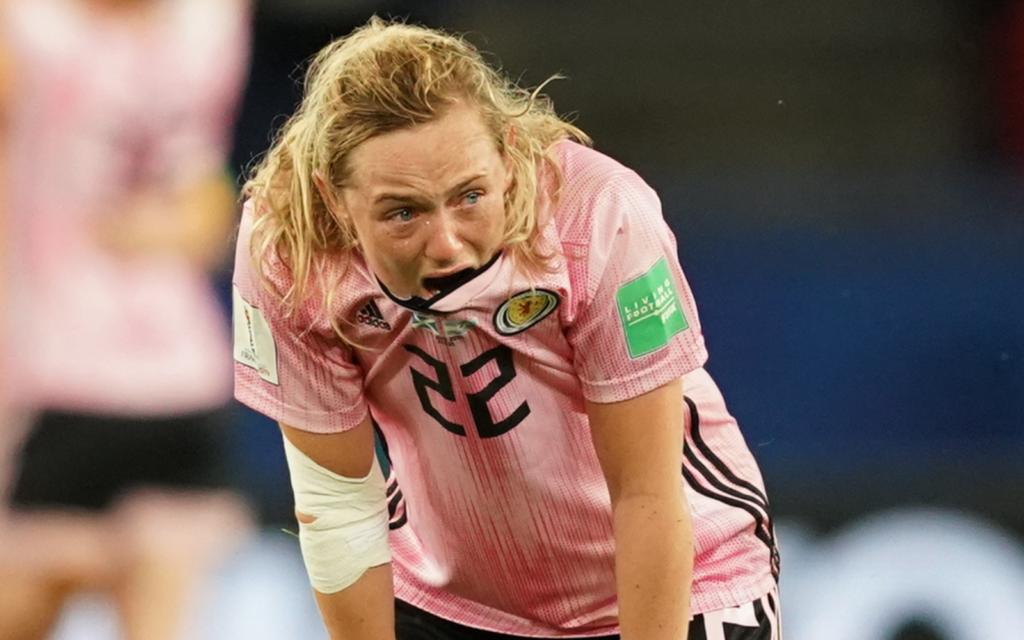 How is it that such a likable team, with such popular players and an affable coach, can be subject to so much heartache? A beleaguered Scotland women’s national team would like to know.

Head coach Shelley Kerr’s Scotland is a different breed, one full of young attacking talents, positive on the ball and always looking forward to what they can be instead of what they’ve endured. And after a group-stage exit at the 2019 World Cup, they remain underdogs – but they have hope for the future.

To understand what happened in France – and what’s ahead – let’s first rewind. Two goals up in five minutes in their crunch World Cup qualifier against group top seeds, Switzerland, the old Scotland began to peep through once more. A goal conceded, a deflection, like the one that had benefited the hosts moments before; one foot in France fast retreating back to Paisley, a bucket of cold water to put out the fires at St Mirren Park.

Kerr’s team would be put through the ringer once more in qualification as they had to dig deep to find a winner against Albania – a theme of their protracted qualification tournament. The win was enough to qualify; Switzerland were held by Poland.

But of course, things wouldn’t get any easier when the team got to France.

Forced to play second fiddle to England for so long, it was of course only fitting that Scotland’s first international opponents were to be their first opposition at their first major tournament. However, the 3-2 loss suffered in 1972 would have been far preferable to the 6-0 drubbing by the same opposition in Utrecht as Scotland, without some of their most important players, stepped forth onto the international stage.

That was 2017 European Championships, a tournament long gone by the time Scotland qualified for their first World Cup under new coach, Kerr. Yet again, there was the same irony: England would serve as opponents in Scotland’s first Women’s World Cup match. Nerves rippled through the team in sticky, humid Nice, and the result another one England, their all-time record increased from 22 to 23 wins in 26 meetings.

Scotland’s second match stung more than the first, from the third ranked team in the world to the former champions who had reached the final of each of their last three major tournaments. The result was another 2-1 loss, but one tinged with controversy. Japan’s first goal came from a glaringly incorrect offside call against Lisa Evans, their second via a penalty conceded by Rachel Corsie for the faintest of contact in the box.

Yet, when there should have been justice – a call or at least a review for a deliberate handball in the box – there was only silence from the officials. The Scots managed to dig out a goal – and a fine one too from Lana Clelland – their second World Cup goal but their second loss.

With one match left, they were hanging over the edge of elimination. Even a win against a resolute Argentina team that had swayed the neutral wouldn’t guarantee progress; Scotland’s destiny was in their own hands as much as it was in the hands of those in groups E and F as teams jockeyed for one of the four, third-place qualifier spots in the knockout rounds.

It had been a long road to their maiden World Cup and although it was Kerr – a well-respected manager who’d been a loyal servant to the team as a defender for 20 years – at the helm, the foundations had been laid by her predecessor. Not quite on par with Laura Harvey’s early days at Reign FC, when Harvey said, “When I came over, we didn’t even have a cone, we literally were nothing,” Anna Signeul had to build Scottland from the ground up. But it wasn’t just the team that needed to be coached; the Swede completely change the face of women’s football in Scotland.

From the academy structure put in place by Signeul to the media presence and promotion that she’s demanded over the years – changes which have seen participation numbers skyrocket – down to the work she’s done with clubs, Scottish football owes Signeul a great debt. For 12 long years, she battled and fought for women’s football, using the successes of the southerners to fight for her own clan. By Signeul’s own estimations, “We benefited in Scotland from the success made in England and saying, ‘OK if they’re on TV, why aren’t we on tv?’”

It might be Signeul’s legacy but for her, the part she played was a small, selfless one. “My dream is that every girl in Scotland has the opportunity to play football,” she said in 2017. She did reap personal reward in leading the team to its first major tournament, in 2017, a bruising affair in which the highs were overshadowed by the lows.

Likewise, the 2019 World Cup is already looking like it would be one to remembered for the losses.

When it came to Scotland’s last stand in France, the team was forced back into itself against an Argentina team who threw the defensive shackles off and attacked at will. Against the odds, Kerr’s team took the lead and after the break they hammered in two more goals. Three goals up and already acting like they were in the final, what followed in the last 15 minutes was an utter implosion from the debutantes.

Less than 15 minutes into her own World Cup debut, Milagros Menéndez pulled a goal back for Argentina, scoring her first senior goal for her country. The match should have still been in the bag for the Scots, but the panic began to set it. And when Florencia Bonsegundo’s hopeful effort clipped off the underside of the bar, grazing off of the back of Lee Alexander’s glove into the net, Scotland completely lost their heads. They were supposed to be making history as the first ever senior Scotland team to reach a World Cup knockout match, but suddenly everything was in doubt. 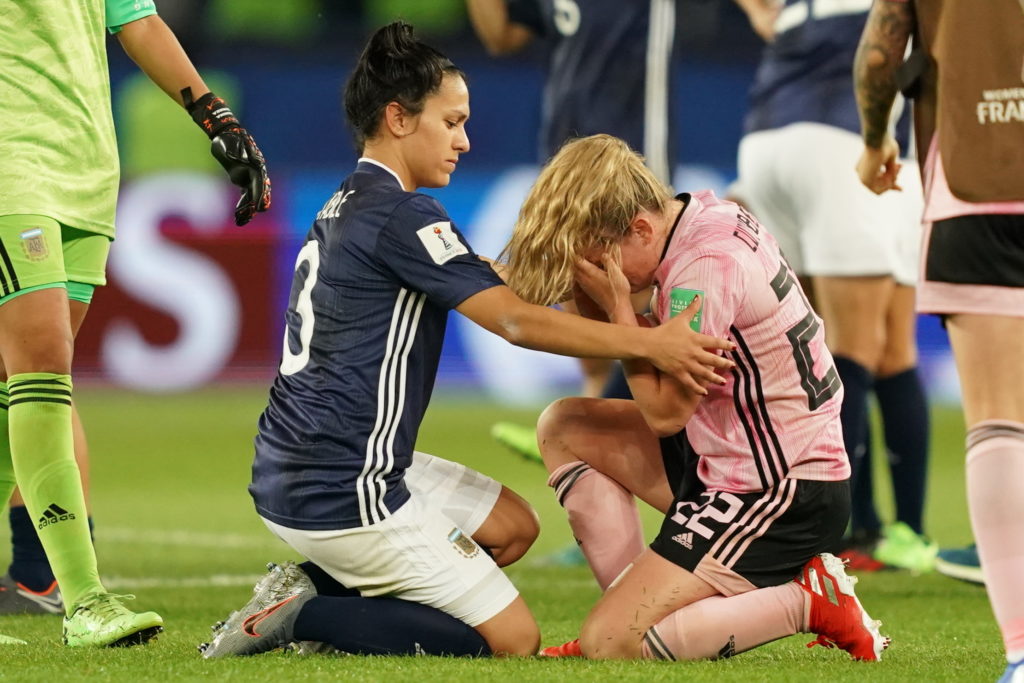 The fouls and cynicism that most in Britain would palm off as ‘the dark arts,’ something the armchair critics would associate with CONMEBOL teams, flowed from Scotland. The fouls were poor and hapless, the timewasting desperate and all too quickly referee Ri Hyang-ok lost control. The nerves that gripped the team rippled through to the substitutes and seconds after coming on, Sophie Howard conceded a penalty. Another penalty conceded against the Scots, another tinged with controversy as it stemmed from a free kick that started when Scotland were part-way through making a substitution. Alexander’s save all but confirmed Scotland’s progression… until video review showed she had left her line.

The encroachment was minimal and in real time did nothing to put Bonsegundo off, but the Argentine was given a second chance, which she converted to keep Argentina’s hopes alive for another day and end Scotland’s tournament. Full time: 3-3.

It was a match of madness and ended with tear-stained cheeks and regret. Yet through it all, Scotland had somehow arrived on the world stage.

The pain of the loss to Argentina and all the what ifs, the penalties, the gripes with officials, the misses, the over-conservatism and the absolute implosion while leading 3-1 in Paris: all of those memories will fade eventually. The gut-wrenching pain will subside. The team, despite the early exit, has never been in better shape.

Scotland’s national side is made up of home-based players and those who ply their trade around the world, with the main bulk opting for England, Sweden and the United States. The team received increased funding for the tournament and the players have far more opportunities than when Kerr was the one on the pitch rather than in the dugout.

It was a long road, filled with crushing heartbreak, to their first major tournament but now the Scots have made it to two straight major tournaments and, the 2021 Euros are already beckoning. The team is a resolute one with more players coming though the talent pipelines. Their very presence has increased media interest, and the players are inspiring the next generation.

Scotland, a nation of just under 5.5 million people, is far more than just Kim Little and Erin Cuthbert. The bar has been raised and the future will prove bright once the grey storm clouds of France 2019 part. Scotland is here to stay.