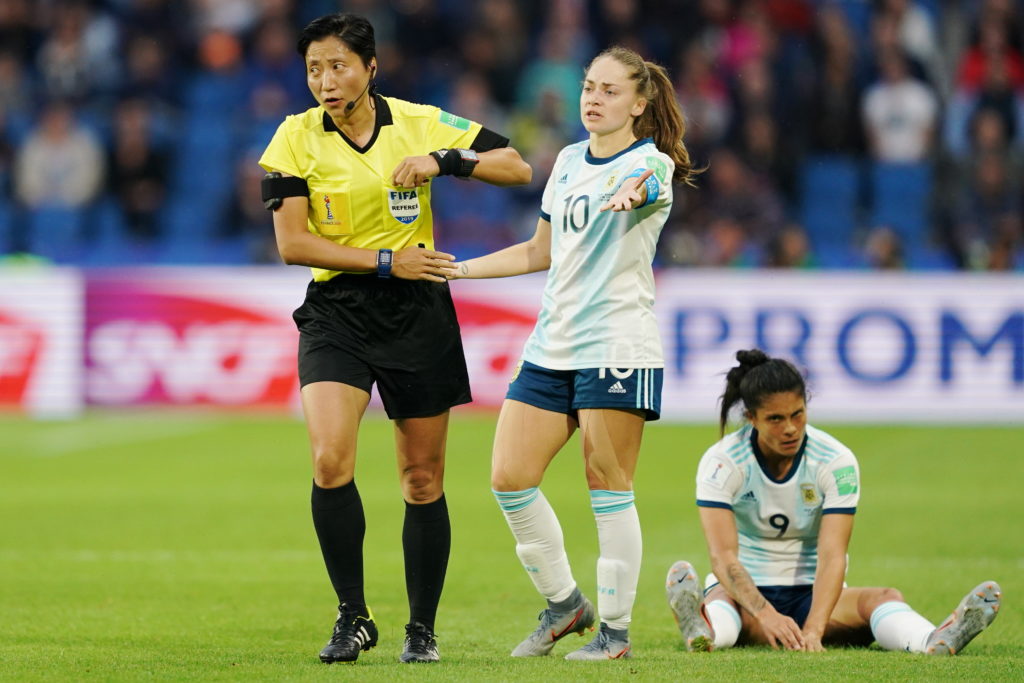 In a shocking turn of events, the Argentine women’s national team will travel to the Pan-American Games in Lima, Peru next week without its lauded captain, Estefanía Banini.

The exclusion of Banini wasn’t the only surprise in store for fans of Las Guerreras. Head coach Carlos Borrello also left off Belén Potassa, Ruth Bravo, Gaby Garton, Sole Jaimes, and Florencia Bonsegundo (Jaimes may also have had club concerns and Bonsegundo reportedly refused a spot in solidarity). Initially, fans wondered if players’ were injured or busy with club commitments, but over the past few days it became clear that the coaching staff sought to chastise players who criticized the professionalism and efficacy of team management.  Players present in team meetings that took place just after their final game at the 2019 Women’s World Cup, against Scotland, confirmed that those cut were the most vocal in asking for more resources and new training methods. For obvious reasons, all of the players we spoke with prefer to remain anonymous.

The situation, however, should not surprise anyone. The women’s football team in Argentina was inactive for 18 months, between 2015 and 2017; the players went on strike in 2017 to try and negotiate with the Argentine Football Association (AFA). Not only was the team without a coach or direction, but the training stipends, less than $10 per day, went unpaid. Veteran players hoped to use the Copa América and a potential trip to the Women’s World Cup to breathe life into the women’s program.

When we interviewed Carlos Borrello, who had just been re-hired as head coach in anticipation of the Copa América, we pointed out that he was one of the few coaches in South America who also regularly coached a women’s club team. He answered, “Can you imagine the patience that I have to have?” and laughed. These types of jokes are common among the staff, according to those within the team, and while perhaps intended to be harmless, one can feel the lack of respect for players that underlies them. In the Copa América in Chile, Argentine players posed for a group photo with their hands cupping their ears, demanding attention from the press and the federation. The jerseys they wore in that photo came used from the men’s program.

Players who were cut did not even receive a phone call to inform them of the news. Players we spoke with were hurt and surprised. Many invested their own time and money into conditioning and training in the build-up to the World Cup in lieu of proper preparations by the AFA. Now, by demanding a more professional environment and better resources to compete, they’ve been denied a chance to perform at another important tournament — competition which remains rare for South American women. Many South American women rely on these platforms to attract the attention of clubs, so few of which offer real, professional opportunities.

So what was the nature of the players’ criticism? Players were fired up after the trip to the World Cup, where they impressed football fans around the world with their talent and tenacity — particularly in erasing a 3-0 deficit to draw Scotland, 3-3. It was an eye-opening experience for many players to see the types of resources available to other national teams. While the coaching staff of teams like England and the United States created individual workout plans and created itineraries months in advance teams, Argentine players received their schedules on scrap paper on the days before World Cup matches against Japan and Scotland. 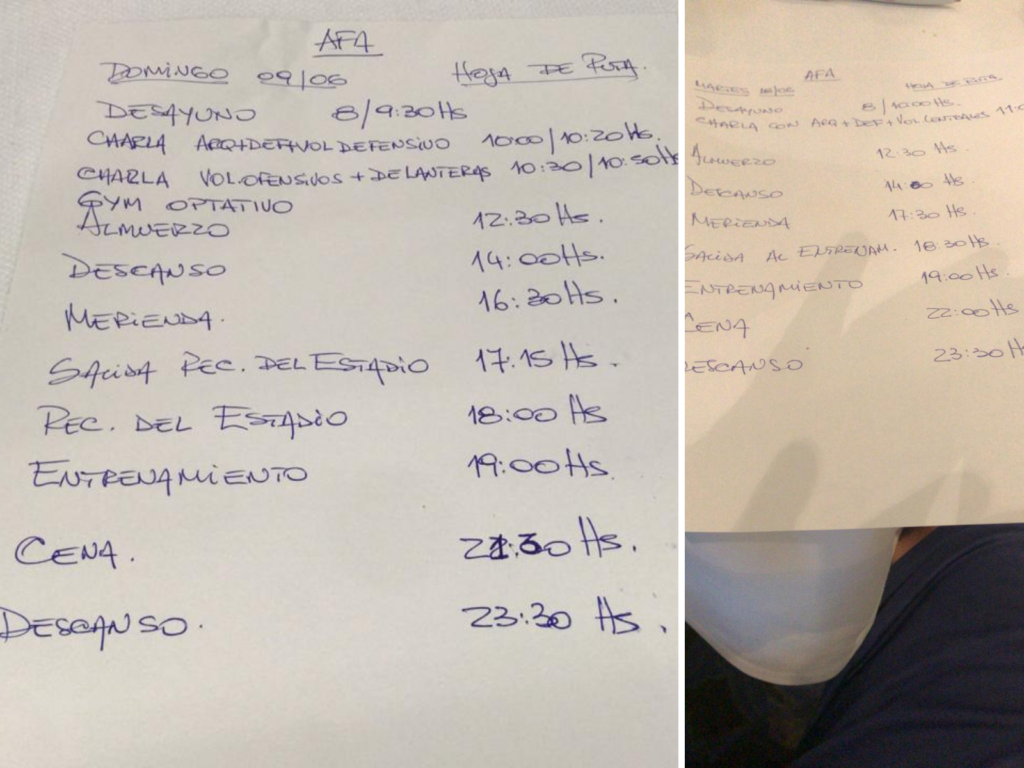 Team itineraries were written on scrap paper during the World Cup.

Whereas GPS technology has been incorporated even at the youth academy level in the US for at least five years, the Argentine team tracked its players for the first time just days before the tournament began. Players, familiar with the technology because they’ve played abroad and at the university level, were surprised to find the coaching staff unable to interpret the data. GPS provides information on work-load, exertion, and positioning to better utilize players. Whereas menstruation is a taboo subject among the Argentine squad, the U.S. women have specific protocol to track and respond to hormonal changes. The list could go on and on, but suffice to say, there are concrete shortcomings in the approach to preparing the team.

Mistreatment of women in Argentine football has a long history. Women have played football in Argentina for over a century. Futboleras faced extreme marginalization, in formal ways, such as clubs, physical education programs, and the federation. Equally as important, family pressure and social shaming restricted women from playing. In recent years, women’s football pioneers have demanded recognition, including many from the 1971 team that represented Argentina at the second Women’s World Championships in Mexico City – organized independently from FIFA.

Perhaps the origin of the present conflict is due, at least in part, from the strong feminist stance that players have taken. Feminists have situated women’s sport on their agenda in a more prominent position than ever before. Public mobilization, and the strong relationship between the women’s team and grassroots social organizations dedicated to women’s football, such as “La Nuestra”, forced institutional responses, even prompting AFA president Claudio “Chiqui” Tapia to declare himself “the president of gender equality.”

The position of president of the Women’s Football Commission of AFA has always been a man, though it’s been vacant for six months since Ricardo Pinela resigned. When faced with banners demanding “feminist football,” or “fútbol feminista,” Pinela asserted that the sport remained limited to “women’s football” or “fútbol femenino” — that the federation wasn’t interested in dialogue about gender equity. That tension was evident in the playoff with Panama in November 2018, when Argentina qualified for the World Cup in the Arsenal Club stadium. The sold-out stadium brought banners, scarves, and flags in support of the Legal Abortion campaign.

Clearly, the relationship of soccer players in Argentina and the leaders operates in that claim-response dynamic. Shortly before the World Cup, the player Macarena Sánchez made public her exclusion from the UAI-Urquiza club and her consequent labor demand: this forced the AFA to declare the professionalization of women’s soccer. AFA agreed to pay a subsidy to clubs, however, it will not even provide the legal minimum salary for a full team. Given that AFA only committed to one year of this arrangement, it will be interesting to see if the grassroots organizations and media keep the pressure on them to improve the landscape for women players. 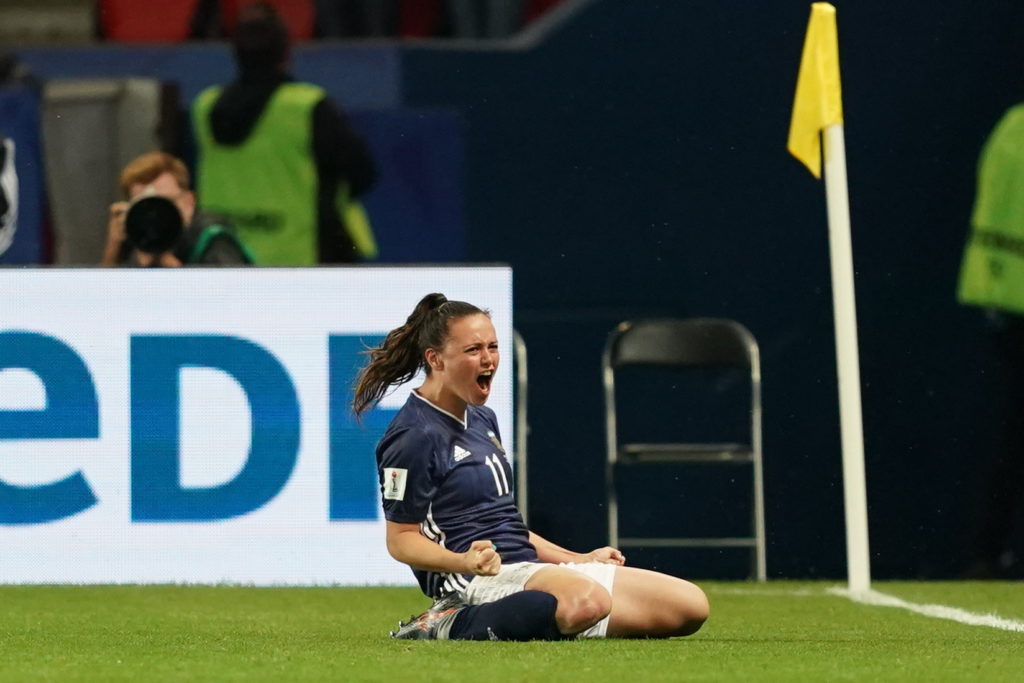 Not inconsequentially, UAI Urquiza’s team, the most successful in domestic women’s football in Argentina, has been led by Carlos Borrello for years. A possibility for positive change going forward would be the unionization of women players. If affiliated with the men’s union, women may find a modicum of support for the labor violations they’ve suffered. FIFPro, along with the FARE network, has opened conversations in this vein over the past year.

The exclusion of Banini and her teammates from the Pan-American Games must also be understood within this context. The most important players on the squad (especially those who play or have played in the professional leagues) have stated that the team’s current management is not enough to aspire to compete on the international level; that the experience of the World Cup was satisfactory on an emotive level, but insufficient in sporting terms.

The small success of having won their first points, with two draws, or the heroic draw against Scotland, allowed them to gain more media coverage and support from the fans. But the players know that this is not enough for women’s soccer to explode in Argentina. To create the type of soccer they want — which is not just repeating the men’s soccer’s issue of exploiting players — it will require sustaining the militant attitude and convergence with feminism that got them this far. In a country with a sports’ tradition like Argentina’s, heroic performances are necessary, but not enough. They’ll need to win.

World-class and mostly overlooked: The story of Charlyn Corral

Now, women players face the staunch resistance of the very men who are charged with helping them flourish. That includes head coach Borrello, who knows he’s being questioned because the players have made their criticism pointedly. This conflict can be seen as indicative of larger struggles of gender equality, whereby the claims of players against institutional patriarchy cannot be tolerated. In this case, women questioning the technical football knowledge of men challenges what coach Borrello and AFA president Tapia can tolerate. Their message is that you can only go so far; you can only ask for so much.

Borrello’s exclusion of the players who spoke out is a classic disciplining operation: punish to silence. In the same moment, it aims to break the solidarity of the rest of the squad by ensuring that he will use the power he has to keep them off the pitch. Less than a month after leaving the World Cup,the male leaders of Argentine football have made it clear they are not only unwilling to promote gender equality, but plan to oppose it.