A spate of injuries hasn’t stopped the Reign yet 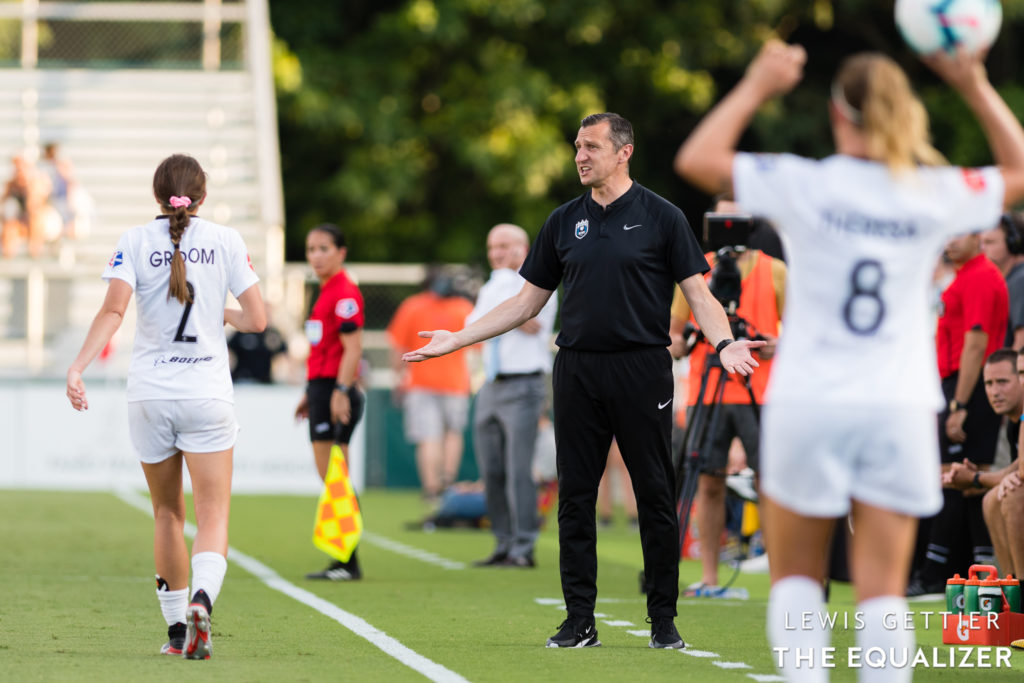 Following the Reign FC’s loss last Saturday at the North Carolina Courage, their first defeat since April 28, a gaggle of reporters asked Reign manager Vlatko Andonovski if the spate of injuries his team has suffered impacted the result of the match.

“What do you think?” Andonovski replied through a wry smile. “When you work hard and you’re determined and resilient, you can overcome some of it. But I think the difference in quality was way too much for us to overcome with hard work.”

The Reign came into last weekend missing 10 players due to injuries, six of them season-ending (although one, Taylor Smith, was signed during preseason knowing she’d likely miss the 2019 campaign as she recovered from ACL repair surgery). To add injury to, well, injury, Andonovski was then forced to take off Shea Groom and Beverly Yanez in the first half, and then Celia Jiménez Delgado at intermission. It’s the fourth time this season that Andonovski has made two substitutions before halftime.

But don’t cry for Andonovski too much. The Reign entered last weekend atop the National Women’s Soccer League table off an eight-match undefeated run. The team didn’t win its first game until May 18, and that was against then-hapless Sky Blue FC. However, the return of Jess Fishlock in late May off loan to Lyon, plus a perennially stout defense, paced the Reign to a home win over the Courage on May 27, followed by road shutout victories over the Chicago Red Stars, Utah Royals, and Portland Thorns. The Courage’s opening goal last Saturday was the Reign’s first one conceded in 320 minutes.

When Fishlock tore her ACL in the win against Utah on June 28, it wasn’t the Reign’s first ailment this season, but it felt the most damaging — in just five games since returning, Fishlock had already netted three goals, tied for the team lead. It was also the latest in a string of significant losses almost too numerous to follow. You could call the Reign snake-bitten, but a snake bite seems like the only malady that hasn’t (yet) befallen the team.

Forward Jasmyne Spencer tore her ACL in the first half of the first game of the season. The Reign lost forward Jaycie Johnson in late June in order to undergo season-ending corrective knee surgery. And then there’s the Reign’s goalkeeper saga. The team was already out of substitutions when goalkeeper Michelle Betos ruptured her Achilles tendon late in the win over Sky Blue, forcing midfielder Morgan Andrews to finish the match in goal. They then signed goalkeeper Scout Watson as a national team replacement player, but Watson was placed on the season-ending injury list last week due to a concussion she suffered in training. And when starter Lydia Williams returned from the Women’s World Cup, she had an ankle injury suffered while playing for Australia that requires surgery and will keep her out of action for at least 10-12 weeks, according to Andonovski.

Add to that hamstring injuries for Andrews and Darian Jenkins, plus calf strains for Rumi Utsugi and Steph Cox, who all missed last Saturday’s Courage match. It’s enough to cripple normal teams, much less one already missing multiple starters to the World Cup. Yet the results still came for the Reign over the past two months, due in no small part to Andonovski’s aggressive mid-season maneuvering. Just past the halfway point of the season, Reign FC are only two points off the top of the table.

The first and likely most important signing was inking goalkeeper Casey Murphy in mid-May. Sky Blue drafted Murphy last year, but the Rutgers product opted to play two seasons for Montpellier HSC in France, where she was named Division 1 Féminine’s goalkeeper of the year in 2018. In seven starts for the Reign, Murphy has conceded only five goals and kept three clean sheets playing behind defensive stalwarts Megan Oyster, Lauren Barnes, and Theresa Nielsen. After left back Steph Catley departed for the World Cup, Andonovski signed Cox, the former U.S. women’s national team player who began the season as the team’s assistant coach and hadn’t played pro soccer since 2015.

Ifeoma Onumonu, brought in as a national team replacement player in May, has worked her way into the Reign’s starting XI. She has started five straight matches at left wing, earning a goal and assist over her last three. Last Saturday against the Courage, Onumonu was the Reign’s most formidable player, displaying a combination of strength, skill, and speed that forced the Courage into midfield tackles and close-downs to keep her out of the attack.

The latest injuries to Fishlock, Williams, and others prompted more moves this week. First, the Reign signed Rosie White, the New Zealand international who last played in the NWSL with the Red Stars and Boston Breakers. The smart and scrappy White adds even more defensive spine to a midfield that already includes Groom and Beverly Yanez.

Speaking of defensive depth, the Reign also brought in former Duke University standouts (and Washington Spirit draftees) Rebecca Quinn and Schuyler DeBree. Quinn, a Canadian international, just returned from the World Cup after spending a season with Paris FC. DeBree was the 2017 ACC Defender of the Year, but after never playing for the Spirit she signed with AC Sparta Praha in the Czech Republic.

Not all of Andonovski’s moves have yet panned out. He traded the Reign’s lone remaining 2019 draft spot, the ninth overall pick, to the Courage for Darian Jenkins, who, after scoring a goal in her Reign debut, has averaged only 58 minutes per game while playing in just six matches, hampered by infirmities that began during her senior year at UCLA and continue throughout her stint with the Courage. Andonovski expended much time and effort to eventually secure the services of Australian international Elise Kellond-Knight, but after appearing in just three matches for the Reign, she was shipped to the Spirit this week in order to acquire backup goalkeeper Sammy Jo Prudhomme and, likely, free up Kellond-Knight’s international roster spot.

The Reign now eagerly anticipate the return of Megan Rapinoe, Allie Long, and Jodie Taylor from their World Cup duties. The Reign’s virulent injury bug means that, unlike most NWSL teams, the returnees may not necessarily supplant Andonovski’s additions, but rather supplement them. Long will be inserted into what’s already one of the league’s best defensive midfields. Taylor and Rapinoe — who didn’t play for the Reign before leaving for the World Cup due to, you guessed it, injuries — could integrate with Onumonu, Jenkins, and Bethany Balcer, who was brought into training camp as a non-roster invitee, signed to a supplement roster spot, and has scored three goals while appearing in every match this season.

But the specter of injury always looms over Andonovski, even as he reconstitutes his roster and anticipates the return of a mega-talent like Rapinoe.

“Obviously, she’s not physically at her best after playing all these [World Cup] games,” Andonovski lamented after Saturday’s loss to the Courage. Rapinoe missed the U.S.’ semifinal victory over England due to a hamstring issue. “She had a little tweak with her hamstring and we’re going to be careful managing it.”

Indeed, for Andonovski and the Reign this year, the managing hasn’t stopped.

The Lowdown: Catching up with the NWSL
Scotland’s future is bright despite World Cup heartbreak